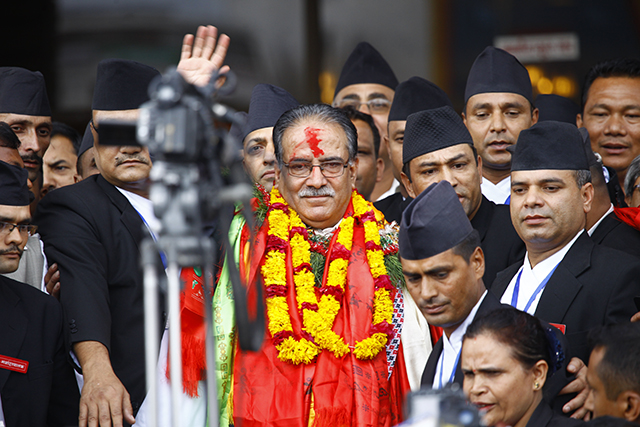 The return of Maoist Chairman Pushpa Kamal Dahal to Baluwatar, and his alliance with Sher Bahadur Deuba of the Nepali Congress this week, prove right two adages in politics: no matter how ignominious the fall, a politician always lives to see another day, and there are no permanent enemies in politics.

Dahal’s transition from Comrade Prachanda to his first swearing in as prime minister in 2008, his resignation in 2009 following an unsuccessful attempt to sack the Army chief, his humiliating defeat in the 2013 election, the years in the wilderness, and his final comeback this week mark the man as a survivor.

For a long time after the conflict started in 1996, many in Kathmandu were convinced Comrade Prachanda did not exist. People had heard of Baburam Bhattarai from his activist days. Krishna Bahadur Mahara was even a Member of Parliament. But who was this Prachanda fellow?

Dahal was born in a hardscrabble family from Tanahu which was among many thousands that were part of King Mahendra’s transmigration policy to relocate hill families to Chitwan. His father was a frontiersman, farming and raising a family at the edge of the jungle. It was not easier to survive in the plains, either — the family had to battle wild beasts, rapacious moneylenders and a government in Kathmandu that abandoned resettled farmers to fend for themselves.

In college, Dahal was strongly influenced by communist ideology. He had seen Nepal's yawning economic gulf at first hand while growing up in Chitwan. "I never really understood why we had to struggle so hard to survive from day to day while our neighbours had all the luxuries," Dahal once told an interviewer.

In 1980, at 25, Dahal became a member of the Communist Party, which was in the throes of a split, reflecting fissures in the international communist movement itself. Nepal’s senior communists made a strong impression on him, but he later disagreed with them about his conviction that only an armed struggle would bring Nepal out of feudalism.

Dahal enrolled at the Agriculture Campus in Rampur, Chitwan, which had been established with American aid and had ironically become a hotbed for leftist politics. After graduating in 1976 Dahal spent two years in a teaching job in Gorkha's Arughat, where colleagues remember he kept banned communist literature in a tin trunk under his bed.

EVOLUTION OF A REVOLUTIONARY: When the war started in 1996, no one had heard of Prachanda. There was only a rare faded photograph of him from the 1970s while he was a young teacher in Gorkha (1). By 2000, a drawing of a man in a turtleneck sweater started appearing in pamphlets and newspapers. Based on various images, Nepali Times cartoonist Subhas Rai even made a likeness of the man from an artistic imagination (2). Then the army got hold of a group photo from a captured Maoist in 2001 that had a bearded Prachanda (3). In later photographs he is seen looking a bit like Omar Sharif (4). Pushpa Kamal Dahal after winning in the 2008 elections (5). And on Wednesday after winning the vote in parliament to be prime minister for the second time (6).

Dahal subsequently did a brief stint at the US-funded Rapti Project and discovered just how wasteful foreign aid was, and how it makes people even more dependent. He was also riled by the segregation between Nepalis and Americans in the project office. By the mid-1990s Salyan, Rolpa, Jajarkot and Pyuthan were as underdeveloped as ever. He has said that it was his experience in the Rapti Project that primed him for armed struggle.

In an imitation of Communist personality cults elsewhere, the chairman named Nepal’s brand of Maoism after himself: Marxism-Leninism-Maoism-Prachanda Path. This played on the word 'path', meaning 'way' in both English and Sanskrit. But more importantly, it had resonance with the 'Shining Path' of the Maoist senderistas in Peru. Prachanda itself means 'awesome' or 'fierce'.

In an interview with Revolutionary Worker in 2000, Prachanda gave a hint of what was to come: “Right now, subjectively, the proletarian forces are weak, after Mao's death and the counter-revolution in China. Nepal is a small country, we are a small party, but we have a big perspective. Our People's War may be a spark, but a spark for a prairie fire ... the People's War in Nepal is contributing to making and accelerating this new wave of world revolution.”

Dahal has had many interviews since then, where he has contradicted himself over and over again, earning the reputation for telling audiences what they want to hear. Re-reading Prachanda’s interviews from the past two decades gives an indication of the kind of political pendulum that he is.

He has also made major gaffes, like boasting on camera that he had hoodwinked the United Nations by inflating the number of guerrillas so his party could get bigger compensation. After a visit to Beijing in 2011, in a puzzling admission, he told reporters at the airport that top Chinese leaders had told him to stop irritating India. And after returning from New Delhi last year he announced that he was ready to drop secularism from the preamble of the constitution.

For someone who is supposed to be an atheist, he has had no hesitation in seeking blessings from mysterious Godmen, consulting astrologers, and taking part in religious rituals. As he becomes prime minister a second time, the questions that were asked the first time will be asked again: Why was it necessary for you to start a needless war that killed 17,000 Nepalis and left Nepal in ruins?

For Prachanda, the end justified the means. Many committed social workers, popular teachers and enlightened farmers were killed by his cadre. When asked about this in a meeting with editors in 2008, Dahal said: “I never ordered our forces to torture anyone. If anyone had to be exterminated, I told them they should do it quickly, with a bullet to the temple.”

After his 2008 election landslide, Dahal demonstrated a brief period of statesmanship. Emerging heavily garlanded from his office he said: “This isn’t my victory, this isn’t my party’s victory. This is a victory of the Nepali people.” Alas, within a month of being in office he was letting his militant unions extort businesses and intimidate the media.

Since resigning in 2009, Dahal has learnt some important lessons: Don't try to play India off against China, don’t treat people like sheep, and don’t ever lie. But it also showed him another anachronism of democracy: even losers can be winners. By being a player of the political cartel that runs this country, he has ensured his role as a kingmaker and a power broker.

No Prachanda, no constitution, Surya Khadka

Letter by Durga Pokhrel in Space Time, 9 January
Wow! It namely likewise fine treatise about JavaScript, babyliss pro curler I dissimilar Your post doesn't acquaint any sense. ray ban outlet uk if information are defined surrounded sketches one can effortlessly be versed with these. hollister sale I think a visualized exhibit can be better subsequently simply a effortless text, chanel espadrilles for sale that why it gives you improved quality. getnjloan.com Can you amuse forward me the code for this script alternatively interest distinguish me surrounded detail among relation apt this script? Vivienne Westwood online get a babyliss perfect curl Very soon this network sheet longing be outstanding among all blog viewers, isabel marant sneakers saleI too prefer Flash,