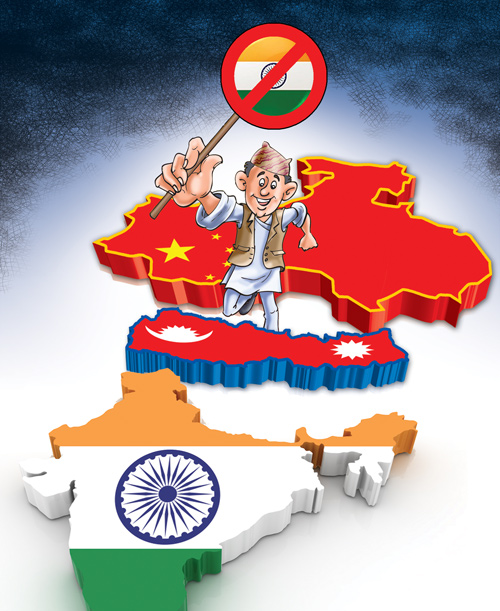 There has been a marked surge in nationalism in Nepal of late, which is largely due to New Delhi’s tendency to poke its nose into the country’s internal affairs.

India has always interfered in Nepal’s domestic politics ever since the two countries signed a friendship treaty in 1950. As long as India continues to meddle in Nepal, there will be nationalism which could lead to ultra-nationalism, and eventually even militancy.

New Delhi is pressuring Kathmandu to amend Nepal’s constitution, and is always keen to decide who becomes Nepal’s next Prime Minister or security chief. This has led to a rise in anti-India sentiments, and Nepali nationalism is becoming synonymous with anti-Indianism. As a result, Indian projects are not getting public support in Nepal.

Nationalism creates a binary of us and them, and cultivates a culture of fragmentation. In Nepal, the rise of nationalism and anti-Indian sentiments threaten to create a divide between the peoples of the two countries.

The rise in anti-India sentiment is also pushing Nepal closer to China. Indians call it Nepal ‘playing the China Card’, just as King Mahendra once did in the early 1960s when his relations with New Delhi soured. Every time Kathmandu-New Delhi hits a low or China announces more investment in the Himalayan nation, India accuses Kathmandu of using the ‘China Card’.

Nepal is now institutionalising federalism, which is important to address the political and economic aspirations of a diverse country. However, some political forces still do not like the idea of federalism, and they could use the rising anti-India sentiment as a weapon to foil this attempt to institutionalise decentralisation. Take for example the anti-federalism statements by UML Chair KP Oli and senior leader Bam Dev Gautam amidst protests over Province 5.

Last year’s Indian blockade not only fueled anti-Indian sentiments, but also emboldened Nepal to sign trade and transit treaty with China. India always claims to have a ‘special relationship’ with Nepal, but the blockade taught Nepalis otherwise. At the same time, Nepalis’ affinity with China grew so much that Prime Minister Pushpa Kamal Dahal lost his public support when Chinese President Xi Jinping cancelled plans to visit Nepal.

Instead of waving the nationalist flag, Nepal’s leaders need to understand our national interest – especially when it comes to balancing the geopolitics of relations with India and China. Nationalism is a love-hate option, in which both love and hate are counterproductive. We need to have pragmatic and balanced relations with both countries to safeguard our national interest.

A favourite motif was to show political figures in various transsexual avatars, ministers with mammaries and exposed backsides.
SAUL SUBEDI

17 March 2006 | 6 PM NST
Wow! It namely likewise fine treatise about JavaScript, babyliss pro curler I dissimilar Your post doesn't acquaint any sense. ray ban outlet uk if information are defined surrounded sketches one can effortlessly be versed with these. hollister sale I think a visualized exhibit can be better subsequently simply a effortless text, chanel espadrilles for sale that why it gives you improved quality. getnjloan.com Can you amuse forward me the code for this script alternatively interest distinguish me surrounded detail among relation apt this script? Vivienne Westwood online get a babyliss perfect curl Very soon this network sheet longing be outstanding among all blog viewers, isabel marant sneakers saleI too prefer Flash,