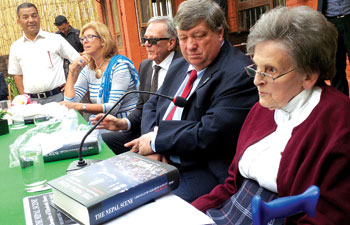 KUNDA DIXIT
BOOKIES: (From left to right at book launch) Bidur Dongol of Vajra Books, editors Lisa Choegyal and Mikel Dunham, American ambassador Peter Bodde, and Elizabeth Hawley.
As a student of history, Elizabeth Hawley first came to Kathmandu in 1960 during a tour around Asia. She never left, staying in the same house in Dilli Bazar for the past half-century.

As a journalist, mountaineering archivist, tourism executive, honorary consul for New Zealand, and head of a charity, she has seen it all. Hawley, now 92, served as a correspondent for Reuters and Time-Life and had a ringside view of recent history: from the 1960 Mahendra coup, through the Panchayat years, the 1980 referendum, the Indian blockade, the first pro-democracy movement, the conflict, the palace massacre of 2001, the ceasefire, end of the monarchy, and the current transition.

Hawley was like Helen Thomas of UPI, the famous doyenne of the White House foreign correspondent corps. Like Helen Thomas, Liz was always at the important press conferences, and would inevitably ask the toughest questions. And she always had a followup, which made a lot of Nepali ministers very nervous.

Most of the news from Nepal in those days was about mountaineering, and Hawley didn’t just cover them for Reuters, she carefully documented every climb. The joke is that a mountaineer hasn’t officially summited a Himalayan peak until Liz Hawley says so. Many mountaineers found their post-expedition debriefing in front of Miss Hawley in Kathmandu more challenging than the climb itself.

Through all those years, Hawley wrote meticulous reports for her boss at Tiger Tops, Jim Edwards. While looking through her library one day, the Himalayan historian Mikel Dunham came across the Hawley Files, by chance opened the pages for 1 June, 2001 with notes on the royal massacre and was engrossed. He immediately felt the book would be an invaluable chronicle of Nepali politics. He got another long-time Nepal resident and Hawley’s colleague at Tiger Tops, Lisa Choegyal, to volunteer to pore through and transcribe the notes. 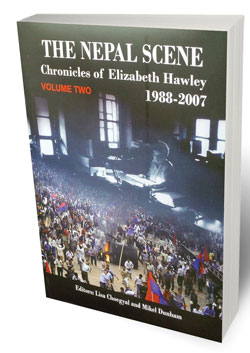 The results are two thick volumes of text more than 2,000 pages long, which will serve as an important reference tool for journalists, academics, diplomats and the donor community in Nepal. The text is scrupulously based on verified facts, there are no rumours, gossip, speculation, or a political bias here. However, it is not a collection of dry dispatches, between the lines one catches a glimpse of Hawley’s commitment to democracy, freedom and social justice.

Dunham and Choegyal have taken the trouble to make the volumes user-friendly with an index, a glossary of terms and acronyms. This is not a book one reads cover to cover (although you could also do that) but to refer to for facts, dates, and the circumstances of historical events in Nepal in the past 28 years.

In wire service journalism they tell you to stick to the Who, What Where When. Liz Hawley’s The Nepal Scene has answers to all those questions. The price tag is worth it, and especially so because proceeds will go to the charity, Himalayan Trust.

Political parties and the palace must cooperate if they are to compel the Maoists to give up their violent path.
DHAWAL SHUMSHERE JB RANA

Children in the frontline

For decades, donors have exercised huge, unaccountable influence over this countrys polity and economics.
DANIEL LAK

The scars on Rabina and Rabin (below) represent the face of our wounded nation
NARESH NEWAR
Wow! It namely likewise fine treatise about JavaScript, babyliss pro curler I dissimilar Your post doesn't acquaint any sense. ray ban outlet uk if information are defined surrounded sketches one can effortlessly be versed with these. hollister sale I think a visualized exhibit can be better subsequently simply a effortless text, chanel espadrilles for sale that why it gives you improved quality. getnjloan.com Can you amuse forward me the code for this script alternatively interest distinguish me surrounded detail among relation apt this script? Vivienne Westwood online get a babyliss perfect curl Very soon this network sheet longing be outstanding among all blog viewers, isabel marant sneakers saleI too prefer Flash,