The underlying problem for Buddhist and Hindu women in Mustang who avoid certain activities while menstruating is that they believe their naturally functioning bodies are shameful.
Clara Hare-Grogg in MUSTANG 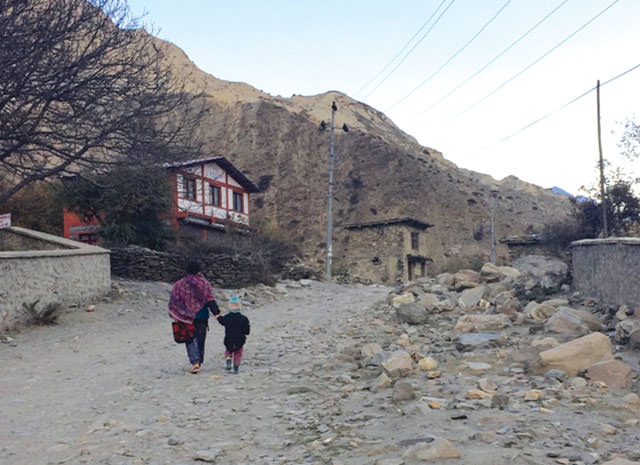 Human rights activists have made great strides by calling attention to the practice of chhaupadi (isolation of women and girls during their periods), which killed another woman in Western Nepal this week.

However, menstrual isolation is not  prevalent across Nepal. In Lower Mustang, for instance, I was pleasantly surprised during a recent study tour with Nepali student Kunsang Gurung that many locals were completely at ease discussing menstruation. The region is rapidly evolving due to education, tourism, and transportation but even so, conditions for menstruation are far from perfect.

In Mustang, home to pilgrimage shrines like Muktinath, menstruating Hindus still avoid temples to keep from polluting sacred spaces and avoid cooking to keep from contaminating the rest of the family. Menstruating Buddhists have the option to avoid certain places or activities, and some choose not to alter their behaviour. Buddhist texts do not explicitly ban menstruating women from monasteries, but some women feel that visiting would be disrespectful. Tibetan medicine regards menstrual blood as different from the rest of the body’s blood because it is like urine or excrement.

The underlying problem for Buddhist and Hindu women in Mustang who avoid certain activities while menstruating is that they believe their naturally functioning bodies are shameful. This is dangerous to women’s health because many women here cannot afford pads, so they reuse cloth. Doing so requires them to regularly wash the same piece of fabric, and if they are embarrassed, they will hang the cloth to dry in a dark, private place, increasing the risk of infection. Menstrual shame also inhibits some women from seeking medical help regarding problems like dysmenorrhea (menstrual cramps). Instead of seeing a health worker, women stay at home, often missing work or school. Changes to society's perception of menstruation are necessary, but this must be sustainable. In one secondary school here, a foreign donor provided a year’s worth of free menstrual pads for just one year, leaving many girls to return to cloth afterwards.

Even some governmental action is questionable. A law passed by Parliament in August 2017 decreed that forcing a woman to comply with chhaupadi is punishable by three months in jail, a Rs3,000 fine, or both. In the far flung regions where chhaupadi is still practiced, however, it’s hard to effectively implement such a law.

We could start by revising the school curriculum to expand on the topic of menstruation, which is currently not even allotted its own chapter. Building roads to places like Mustang could make menstrual products more accessible and affordable. Pads, being unaffordable for many women, are considered cosmetic products. In the largely makeup-free environment of remote Nepal, this classification seems to undermine the natural, biological health concern of menstruation.

In order to create sustainable change, culture must be changed from within. In her doctoral thesis on the subject, Nitka Sharma asserts that for many women in Nepal’s patriarchal society the only power they have is over other women. This is why the older generation of women perpetuates unhealthy, and in some cases deadly, menstrual practices like chhaupadi.

In Mustang, I spoke with one health teacher who had just come from a class on menstruation. When she saw that the boys weren’t paying attention, she scolded them. “Don’t you think it’s important to know about this?” she asked. “You all have a mother, and you’ll marry a girl one day. They experience menstruation, so you need to understand it, too.” This inspiring teacher’s sentiment needs to be spread: women’s problems are everyone’s problems.

Clara Hare-Grogg is an anthropology student at Davidson College, USA.