Relic of a legacy

Kaiser library, one of the jewels of the Rana crown, awaits repairs after the earthquake
Shuvechchhya Pradhan 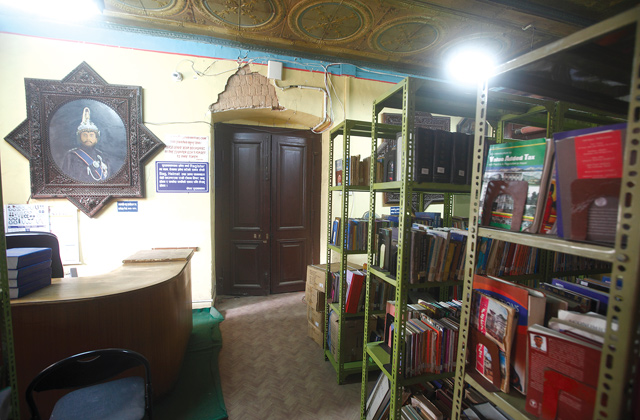 Politically correct history books depict the century of rule by the Rana dynasty that ended in 1950 as being feudal and despotic. What is largely hidden is their contribution to knowledge and the arts.

One of the jewels in the Rana crown was the library set up by Field Marshal Kaiser Shumshere Rana in 1908 after he visited Great Britain with his Anglophile father, Prime Minister Chandra Shumshere. Kaiser Shumshere’s collection of rare books was once regarded the largest private library in Asia with titles dealing with history, philosophy, geography, politics and religion.

The library was already suffering from government neglect, many books had pages missing and the stacks were falling apart, when the April 2015 earthquake struck. The historic palace was badly damaged, causing the roof to leak, and large cracks opened up on the ornately decorated pillars and walls (above).

The books that once lined the halls and the corridors are now packed in sacks and the photographs, paintings and animal trophies are in storage. Almost two years since the earthquake, the library is still awaiting repairs and is now functioning from two rooms on the ground floor. 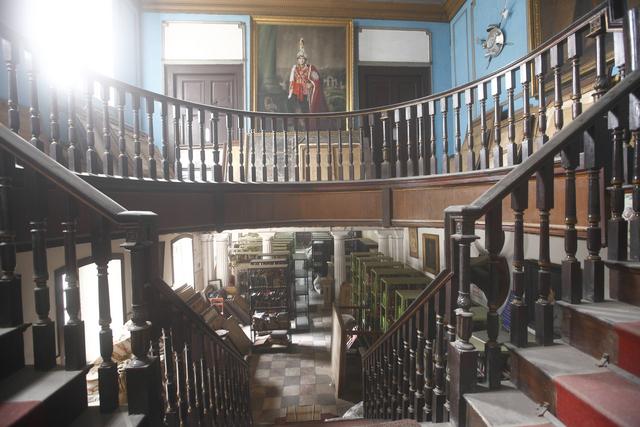 “We have stored away the books and haven’t given full access to the public. Visitors can only read newspapers sitting on the desk outside but the other floors are not accessible,” says Hiru Maharjan, showing a visitor around.

During Kaiser Shumshere’s lifetime, the library was private, accessible only to family members. But scholars and researchers from the country and abroad were welcome to use the resources.

“All you had to do was ask my father’s permission and then return the book on the due date. He hated it when people didn’t return books on time,” recalls Lok Bhakta Rana, Kaiser Shumshere’s youngest son.

Indian prime minister Jawaharlal Nehru had visited the library and it was also used by noted orientalists Percival London and Sylvain Levi for research. After Kaiser Shumshere’s death in 1964, the family donated the Kaiser Mahal library along with its 1.7 hectare property to the government.

The Garden of Dreams that Kaiser Shumshere modelled after palace gardens that he saw during his trip to Britain and France was restored by Gotz Hagemuller and his team, and is today a popular oasis for the public.

The library didn’t only come with a treasure trove of books and paintings, it also had a collection of rare manuscripts that Kaiser Shumshere had bought from locals. Among them is a 1,134 years old Sahottartantra written in palm leaf which is listed in UNESCO’s Memory of the World Register and is considered to be oldest treatises on Ayurvedic medicine. 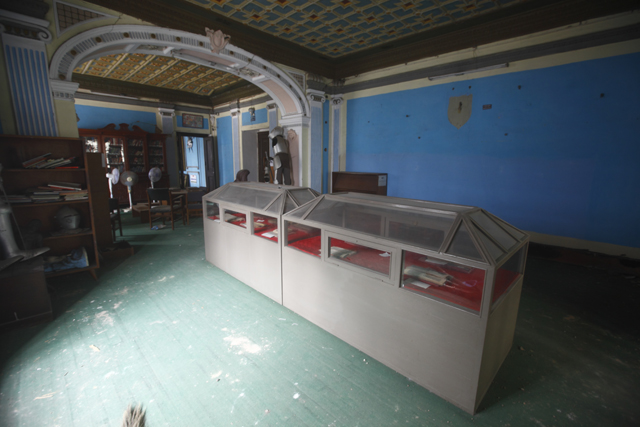 “My father used to buy these manuscripts mostly from the Shakyas and the Bajracharyas for around Rs 400, which could actually fetch one ropani land at that time,” says Lok Bhakta Rana. Almost all of the manuscripts have now been digitised with the help of the German Government.

After the earthquake, the staff rushed to save the books on the upper floor. Lok Bhakta got an Israeli rescue team to assess the damage. But progress in rebuilding has been slow and the future of the palace wing is still in limbo.

Vibration from the construction of the nearby Sheraton Hotel have also impacted on the building which was already weakend by the quake.

Dash Rath Mishra, the chief librarian, says: “The National Reconstruction Authority has told us there is a budget for the library but we haven’t received any money yet. The plan is to retrofit the building, since it is so historic.”

Lok Bhakta Rana says the library is neglected because it is now government property, and wants it to be restored along the same self-sustaining public-private-partnership model as the Garden of Dreams with an autonomous committee.

He says: “The government should work as fast as possible to restore the library. We don’t want to regret donating my father’s private collection to the government.”

The earthquake damaged many libraries in Kathmandu, including: 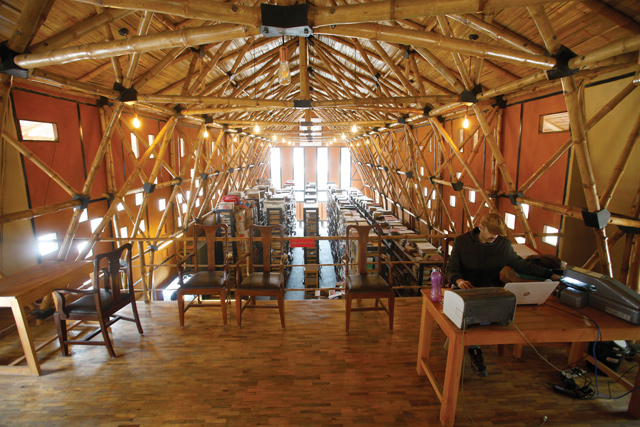 The Madan Puraskar Pustakalaya in Patan reopened its doors to visitors last September.

Also housed in a 90-year-old Rana-era building, the National Library is no longer open to the public due to earthquake damage. Librarian Anju Shakya says some of the books have been relocated to Mahendra Bhavan and the rest are stored in sacks. The design for a new library building is now ready.

The old building is not safe, and only the ground floor is open to the public. Because the library has already started using new technology and online services, the earthquake hasn’t affected its content and services. The design for the new building has been proposed, but no one has any idea when it will be built.

This archive housed in a 100-year-old former stable of Madan Shumshere was badly damaged in the quake, but the priceless Nepali books were saved. The building has been demolished and replaced with a unique bamboo-rammed earth construction (above) designed and built by the Nepali company, Abari. Madan Puraskar Pustakalaya is an archive, not a library, and is fully functioning again.

Rana palaces after the earthquake