The world beyond thangkas 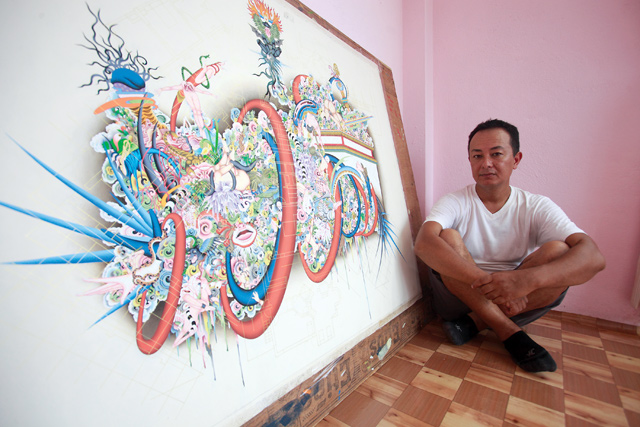 Renowned thangka painter Urgen Dorje gave his son, Ang Tsherin Sherpa, an ultimatum: either get better grades in school or stay home and learn the ancestral art of thangka painting.  Sherpa instantly opted for the latter hoping it would be the easy way out, only to realise that it was going to be the most grueling six years of his life.

“I was forced to learn this very rigid traditional technique, I was never really inclined to it," recalled Sherpa who at age 13 used to wake up at the crack of dawn, every day, to memorise the scriptures.

Finding no room for exploration, the young man deviated from the structured and pre-determined art form. Sherpa set out to find his own voice challenging the rigid rules of devotional art.

“The form is supposed to be exact in traditional art; when we change this form does the essence of the deity stay in that form? So, is the deity in the form or in us?” Sherpa asks rhetorically. One of his works is a digital manipulation of the image of a deity that has been transformed into a swirling figure of colors.

Infusing his own ideas, while retaining most of the traditional techniques, Sherpa’s creations tactfully explore Tibetan deities, spirits and narratives in a modern-day setting. “This is a tradition that helps millions of people but it is not the only way. Sometimes you have to find your own path,” said Sherpa, who now lives in Oakland and was on a brief visit to Nepal this week.

Lauded for his intricate detailing and skilful depiction of contemporary issues, Sherpa has exhibited in prestigious venues like New York’s Rubin Museum of Art, Rossi & Rossi in London. The artist comes to Kathmandu to work with his uncle and cousin when he gets bigger consignments for artworks for large scale exhibitions.

Although trained in Kathmandu, it was not until Sherpa migrated to the United States in 1998 that he discovered his true calling. “After going there I realised how rich my own heritage and culture were and it was then that I started appreciating it,” said Sherpa.

Sherpa started out using his technique for publicity posters for a California restaurant retailer Jamba Juice in 2003. This was just to make some money, but Sherpa found his calling in creatively adapting the traditional mural art from the Himalayas.

Sherpa feels that traditional thangka paintings have become monotonous and the audiences are desensitised by its uniformity. “Regardless of whether there is an audience or not I will still create work just to satisfy my own inquisitiveness,” said the artist dressed in a plain white t-shirt and grey cotton half - pants, seated to next to his vibrant artwork.

Today, most of Sherpa’s works convey a sense of alienation and having to adapt to a new culture and society. Recurring themes and motifs of identity, blending of cultures and evolving sense of self, all evoke feelings of being uprooted and dispersed.

‘Fragments’, for example, uses cropped digital images of 14th-15th century thangka paintings that are assimilated into an abstract work to convey a sense of wholeness in fragments. “Wherever we go we try to preserve whatever we have, or at least a part of it, if not the whole,” explained Sherpa.

It is this freedom to experiment and discover, that Sherpa enjoys the most, and to use traditional motifs to depict political references and popular culture.

“I make my own rules, the image is my vocabulary.”

18 hour curfew announced in the Valley

"We will not accept monarchy"

This transitional parliament must hit the ground running
CK LAL

Now for the hard part

The parties will find that fighting for democracy was easier than crafting a new constitution
SHIVA GAUNLE
Wow! It namely likewise fine treatise about JavaScript, babyliss pro curler I dissimilar Your post doesn't acquaint any sense. ray ban outlet uk if information are defined surrounded sketches one can effortlessly be versed with these. hollister sale I think a visualized exhibit can be better subsequently simply a effortless text, chanel espadrilles for sale that why it gives you improved quality. getnjloan.com Can you amuse forward me the code for this script alternatively interest distinguish me surrounded detail among relation apt this script? Vivienne Westwood online get a babyliss perfect curl Very soon this network sheet longing be outstanding among all blog viewers, isabel marant sneakers saleI too prefer Flash,