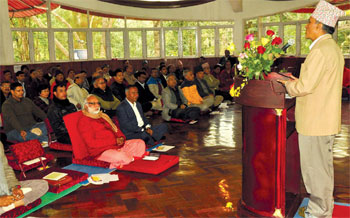 Love was in the air last week as Nepalis really got into the mood for Valentine’s Day. But over at Osho Tapoban in the midst of forested hills, devotees of the love guru Osho were not talking about conjugal bliss but about economic development.

In a setting that is more suited to sermons of the transcendental the discussion last week centred on mundane day-to-day temporal issues of economic survival. Swami Ananda Arun sat cross-legged listening to speakers hold forth on Nepal’s political economy.

“If country is stagnating, we can’t remain chanting only om,” the venerated guru told the congregation.

Tapoban has started taking an interest not just in the afterlife but in the here and now with this discussion series every Saturday on politics and the economy. Among those present in last week’s edition were powerful Chief Secretary Lila Mani Paudel and billionaire Russian of Nepali descent, Upendra Mahato. Minister of Law, Justice and Parliamentary Affairs Narahari Acharya, and many prominent personalities from parliament to government agencies to entrepreneurs.

Mahato had flown all the way from Europe, attended the event and went straight back to the airport after it to fly out. The NRN businessman underlined the fact that no one can build the country but us, not one is going to do it for us.

He cited his own example: the same village school in the Tarai which educated him also educated hundreds of other children. “Now, I am a successful businessman,” he said, “many Nepalis are successful abroad, why can’t we be successful in our own country?”

Mahato believes wealth cannot be amassed at the expense of fellow-citizens – all the boats must rise together. He is worried about Nepal’s growing income gap and feels it could trigger a future conflict. He urged the government and civil society to protect middle and lower-income traders because they help spread the wealth around.

In addition, there should be law that could prevent monopolies. Power is built on power, powerful people have the access to loans and political connections to build their empires, but they don’t think of the others. “This is right time to devolve economic power,” Mahato said.
Then, Chief Secretary Paudel waxed eloquent about Eastern philosophy and modern value systems. We are educated in the Western way but our mindset and values are Eastern, he said, leading to paradoxes and contradictions in dealing with development.

Paudel cited the example of a school boy he met recently. “What do you want to be in future, babu?” he said he asked the boy. “His answer: I’ll do whatever earns me more money.”

“What do you do with that money?” was the follow-up question from the government’s senior-most bureaucrat. “Moj garne ni (have fun),” the boy answered.

The conclave lamented the materialistic values that have overtaken more spiritual pursuits in society. Earning money at any cost to have fun is the new credo, not just among the young but also among senior politicians where greed and selfishness are now entrenched.

Parents are impatient to pack their children off to the US or Australia whatever it takes, and Paudel has met some of them who tell him they would gladly have stayed back in Nepal if it was more developed. “So, who will build this country?” Paudel asked. “Is this country underdeveloped only because the leaders are not accountable, or is there a deeper malaise in society?”

This was a rhetorical question. We cannot import leaders, and citizens have become cynical. Maoist Chairman Pushpa Kamal Dahal once criticised Kathmandu’s “sukila-mukila” (prim and proper) for littering the sidewalks outside their homes. He was partly right. We blame our government for underdevelopment, and never analyse our own behaviour.

“We have people who study aeronautical engineering, but they still sacrifice a goat in front of a jet to appease the gods so there won’t be an accident,” he said, hinting at fatalism in society.

A three hour long program concluded with Swami Arun’s summation. He lamented the poor state of the country and how shabbily Nepalis are treated abroad. His parting words to his flock: “Just chanting om is not enough, we have to work individually and as a society for our country’s economic prosperity. It is vital for our self-esteem.”

Can we start talking now?
RAMESH POUDEL in SANDHIKHARKA

.is easy once you figure out the subversive subtext in a furniture shop.
DANIEL LAK