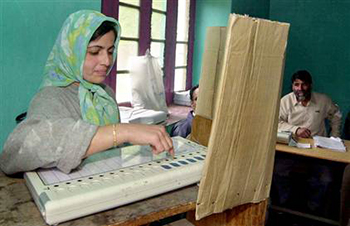 2ndlook.wordpress.com
At election time in India, the mainstream media likes to predict that Muslims will turn out in overwhelmingly high numbers to vote, driven by their passion for the politics of identity. No empirical evidence is ever furnished to sustain this narrative.

This has acquired the aura of truth in the last two decades as the Hindu ‘upper’ castes and middle class switched over from the Congress to the BJP. But what diminished the political heft of these groups was that Muslims and Dalits, who had sustained Congress domination for decades, didn’t follow them into the BJP.

The reverse, in fact, happened. Alarmed at the BJP’s habit of demonising Muslims to consolidate the Hindu vote they sought to combine with other social groups to tactically exercise their franchise in favour of groups best placed to defeat the saffron alliance. In determining their primary interest and identifying parties most likely to promote it, Muslims don’t behave any differently from other social groups. But what distinguishes the choice of Muslims from that of others is the importance they place on their own security.

Despite this, the voting pattern among Muslims is as diverse as any other social group. A Centre for the Study of Developing Societies survey of the 2012 Uttar Pradesh Assembly election shows that 39 per cent of Muslims voted for the Samajwadi Party (SP), down from the 45 per cent in the 2007 assembly election. The Bahujan Samaj Party (BSP) mopped 20 per cent of Muslim votes, an increase of three per cent from 2007. In other words, even though the SP won a majority in 2012, its support among Muslims was eroded, challenging the media’s analysis which saw them as having played a crucial role in the rise to power of Uttar Pradesh strongman and scion, Akhilesh Yadav.

These figures show that Muslims don’t rally behind one party, both Muslims and upper castes have their own political favourites, but the degree of support for them varies from election to election.

There is no denying that the BJP’s support among the Muslims is negligible. And this is understandable since it has defined its politics as anti-minorities in order to shore up its Hindu vote. The BJP prime ministerial candidate Narendra Modi may have chosen to harp on development, but for Muslims his very persona rekindles memories of the 2002 anti-Muslim riots in his home state of Gujarat.

The apprehension among Muslims about Modi could inspire them to turn out in extremely high numbers on the polling day. Or persuaded by the media hype that Modi’s march to power is inevitable, they could be dissuaded from exercising their franchise in large numbers. Muslim turnout is usually lower than the national average, dipping to 46 per cent, as against the national average of 58 per cent, in the 2004 elections.

What explains the media stereotype about the voting behaviour of Muslims? Perhaps because journalists are overwhelmingly upper caste Hindus who buy into the BJP propaganda that the minority community coalesces around a party, ignoring past empirical evidence to the contrary, because of its attempt to protect and preserve its religious identity.

Ironically, the fact that the upper castes vote the BJP overwhelmingly is viewed as secular. It is this media narrative which creates communal polarisation in India, much to the BJP’s advantage.

UMLs Jhalanath Khanal in Kantipur, 19 March
Wow! It namely likewise fine treatise about JavaScript, babyliss pro curler I dissimilar Your post doesn't acquaint any sense. ray ban outlet uk if information are defined surrounded sketches one can effortlessly be versed with these. hollister sale I think a visualized exhibit can be better subsequently simply a effortless text, chanel espadrilles for sale that why it gives you improved quality. getnjloan.com Can you amuse forward me the code for this script alternatively interest distinguish me surrounded detail among relation apt this script? Vivienne Westwood online get a babyliss perfect curl Very soon this network sheet longing be outstanding among all blog viewers, isabel marant sneakers saleI too prefer Flash,