Nepal is a mouse that has to learn to live with two big tomcats in the neighbourhood, one red and the other saffron 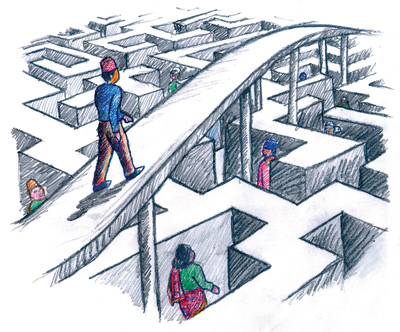 With the end of World War II, Nepal was aware of the winds of change in the world and took a very smart step of sending a ‘goodwill’ mission to Washington DC in October 1946. The result was that on 25 April 1947 Nepal and the United States established diplomatic relations.

We are currently celebrating the 70th anniversary of Nepal-America relations with various programs. In those seven decades, the US has helped Nepal eradicate malaria, built a ropeway to Kathmandu (now defunct), contributed to the East-West highway, and established the forestry campus and agriculture college in Pokhara and Chitwan. Many of us went to some of the best US universities on full scholarships. Peace Corps volunteers became the first foreigners to reach remote Nepali villages and became ambassadors for the millions of Americans who came here as back-packers and hippies.

1947 was also the year Britain granted independence to India and Pakistan. Only three years later, Nepal and the Republic of India signed a treaty of peace and friendship and trade and commerce. This treaty continues to be a source of debate and suspicion in Nepal, even though many have not read it.

In 1949, China declared its intention to ‘liberate’ Tibet, and it was not until 1955 that Nepal and the People’s Republic of China established full diplomatic relations – eight years after the US. Nepal no doubt benefited from having the US as an ally as America’s power in the world grew. Strong bilateral relations have worked as the third leg of the stool – helping Nepal remain stable. Nepal made a smart move then and must continue to be as smart as it was in 1947.

America took over the world not so much with its military might but rather with its popular culture, food, Hollywood movies and cartoons like Tom and Jerry. The plot of Tom and Jerry is very relevant for a country like Nepal that needs to be clever, agile and able to stay ahead of the game, given we live next to two big countries.

There is an episode of Tom and Jerry that you can get on YouTube (Jerry’s Cousin) that is especially relevant to Nepal. Chinese reformer Deng Xiaoping, the leader credited for leading China to economic prosperity, once said that it didn’t matter if the cat is black or white as long as it caught mice. Like the quick-thinking Jerry, Nepal today has to deal with two tomcats, one is red the other saffron.

A big challenge today in Nepal, where one in four have left the country and more are planning to do the same, is that there is a tendency to not be risk takers but to play safe and play the ‘second mouse’. This mindset is to watch and see what happens to the first mouse. If the first mouse gets killed at the mouse trap, the second mouse gets the cheese.

What we need is a Nepali society that supports new ideas and risk-taking entrepreneurs, and creates the supporting ecosystem for their enterprises to flourish. Silicon Valley startups have a lot to teach us. We can offer Nepal as the new innovation centre for entrepreneurs who use our strategic location between two of the world’s largest markets.

Many Nepalis today have cousins in the USA who support them back home. Nepal has done well to have Washington as an ally, friend and cousin. The next 70 years of the Asian Century should cement these relations for co-prosperity.

Anil Chitrakar is President of Siddharthinc. ½ Full is his fortnightly column in Nepali Times.

Obor, or not obor?, Akanshya Shah

Landmine victims need help to stand on their own feet. Bhagwati Gautam last year as landmine victim, and today as an anti-landmine activist.
KUNDA DIXIT

Bikas Bhattarai in Nepal Samacharpatra, 25 May

Editorial in Rajdhani, 26 May
Wow! It namely likewise fine treatise about JavaScript, babyliss pro curler I dissimilar Your post doesn't acquaint any sense. ray ban outlet uk if information are defined surrounded sketches one can effortlessly be versed with these. hollister sale I think a visualized exhibit can be better subsequently simply a effortless text, chanel espadrilles for sale that why it gives you improved quality. getnjloan.com Can you amuse forward me the code for this script alternatively interest distinguish me surrounded detail among relation apt this script? Vivienne Westwood online get a babyliss perfect curl Very soon this network sheet longing be outstanding among all blog viewers, isabel marant sneakers saleI too prefer Flash,