A carbon neutral Nepal is possible 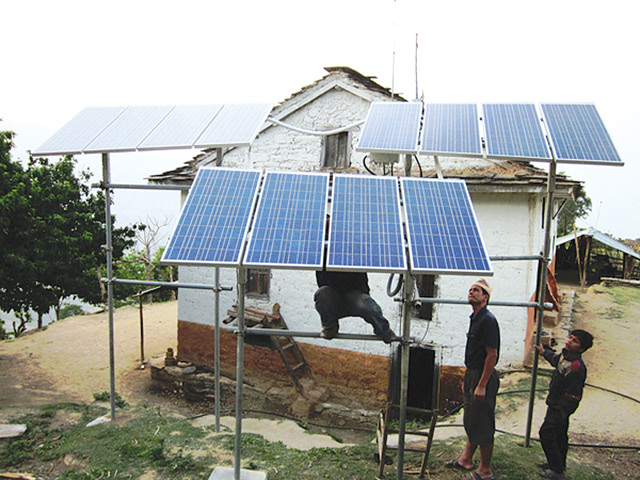 The Rastra Bank is concerned that Nepal’s import of petroleum products, vehicles and spare parts is going up, and the value of remittances coming into the country is starting to decline.

Imagine all our young men and women working all over the world, sending money home so that we can burn oil imported from the same countries they toil in. What a sad state of affairs.

In the meantime, many cities and countries have announced ambitious and time-bound goals to phase out fossil fuel powered vehicles. Nepal has no petroleum, and it is time we recognise this and move ahead to wean ourselves from a fossil fuel economy.

How clever are we? We send our young to oil-rich countries, they send money home and we import and burn fossil fuel, pollute the air we breathe and send the money right back… really clever.

The idea is to use the heat and light from the sun to the maximum, to conserve and wisely use every drop of water that falls on Nepal, flows down the mountains, irrigates the fields, is stored in our watersheds and snow-capped mountains, lakes, wetlands and historical ponds.

Our forebears understood the importance of solar and hydropower, which is why they accorded religious significance to them at Chaat. Which is why Nepal should have a Chaat energy policy, to save the country from bankruptcy. With the bumper rice harvest this year, again a gift from the sun and water, imagine how much husk and straw we have for fodder and fuel.

The last Power Summit organised by Independent Power Producers Association of Nepal (IPPAN) declared that Nepal could and would generate 10,000MW of hydropower in the next 10 years. The politicians who were in attendance said 10,000 was not ambitious enough: they doubled the number and also reduced the number of years to achieve the goal.

The core issue is not how many thousand megawatts we can generate but whether we have an economy that can consume that power. Rice cookers are a good start. An average Nepali eats 146kg of rice a year, which translates into a lot of LPG import we could reduce. Electrical appliances, vehicles, transport and even storage batteries could reduce our dependence on imported gas, petrol and diesel.

All of us pulled out our rice cookers to substitute for LPG during the Indian blockade. If the NEA could set a differential price for non-peak time use of electricity, many would start using these appliances more. We have to become more creative in how we utilise our plentiful natural resource biomass, agriculture waste and waste in general as energy.

If Bir Hospital can convert its waste into fuel, everyone else can. Poultry and dairy farms are already taking the lead, creating mini grids, and there is a policy in place for net-metering and selling the surplus back to the grid. The buyback rate for roof-top solar is very attractive. We only need to upgrade local transformers and every Nepal will be eligible to be members of IPPAN. All citizens can be independent power producers.

The first daytime end use of any local hydro plant must be cable bridges and cable cars for the transport of goods. Bir Bahadur Ghale (see Nepali Times, #786) has shown us the way for many years in Barpak (Nepali Times, #760). The load factor ensures profitability of these local power plants. A good hybrid energy project would be where we supplement all run of the river power plants with 5-6 hours of storage by erecting solar panels to generate power during the day and having a small storage capacity to enable us to generate power during times of peak demand.

Should we do it now, or wait till fossil fuel imports keep rising and remittances keep falling to the point where we are unable to pay? History provides us with the current opportunity to get on the path of a clean and carbon neutral Nepal. Let us grab it.

Anil is President of Siddharthinc

Budgeting for self reliance, Sujit Acharya

Space Time, 7 March
Wow! It namely likewise fine treatise about JavaScript, babyliss pro curler I dissimilar Your post doesn't acquaint any sense. ray ban outlet uk if information are defined surrounded sketches one can effortlessly be versed with these. hollister sale I think a visualized exhibit can be better subsequently simply a effortless text, chanel espadrilles for sale that why it gives you improved quality. getnjloan.com Can you amuse forward me the code for this script alternatively interest distinguish me surrounded detail among relation apt this script? Vivienne Westwood online get a babyliss perfect curl Very soon this network sheet longing be outstanding among all blog viewers, isabel marant sneakers saleI too prefer Flash,