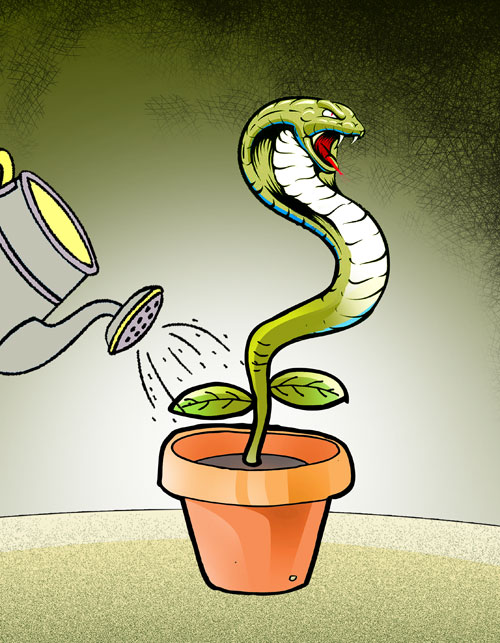 Who is actually running Nepal? That, as they say, is the million-dollar question. But at stake is much more than a million bucks.

To be sure, we do have what could pass as a government. There is a Parliament, a Supreme Court, a civil service and security agencies. There is a supposedly independent, anti-corruption watchdog and a human rights commission, too. We have those institutions in place, but still we don’t have good governance.

This week two years ago, after nearly a decade of political transition and as the capital was still rocking from aftershocks of the earthquake, Parliament voted in a new Constitution. We hoped Nepal would finally be an inclusive and well-governed nation. But, as we mark the second anniversary of the Constitution, hopes are fading fast.   So why aren’t we on the right track yet? Just look around you: the king is gone, but he has been replaced by lots of little kinglets who treat Nepal as their fiefdom.

In a democracy, rulers must be accountable to people, but in our federal secular republic they are more accountable to mafia. The currency note is more valuable than the ballot paper. The mafia control everything, and are protected by political patronage. Even the anti-corruption watchdog protects the corrupt.

Govinda KC has risked his life 11 times pushing for reforms in the mafia-run medical education sector. Yet, despite the government’s written commitment to not allow new medical colleges for the next 10 years, Tribhuvan University secretly granted affiliation to Kathmandu National Medical College, which does not even meet minimum standards for a health facility. Following public outrage, TU withdrew its decision, but no action was taken against its Vice Chancellor Tirtha Khaniya even though he misinterpreted a Supreme Court decision to grant affiliation to a college that had forged documents.

Media is awash with exposes of a land scam involving the Nepal Oil Corporation (NOC). A parliamentary probe panel concluded the utility misused public money by buying overpriced plots of land through agents instead of following the protocol of building its infrastructure on land acquired by the government. The Public Accounts Committee asked the Commission for Investigation of Abuse of Authority to investigate the scam, but the watchdog looked the other way. Supply Minister Shiva Kumar Mandal vowed to take action against Gopal Khadka of the NOC, but he suddenly did a 180 and is defending Khadka and going after designer shoe stores on Darbar Marg instead. Education Minister Gopalman Shrestha is defending the tainted general manager of Sajha Prakashan, Dolindra Sharma.

The checks and balances no longer work, and politicians are just puppets in the hands of Nepal’s mafiacracy.

Shekhar Kharel is a freelance journalist.

Sanghu, 29 January
Wow! It namely likewise fine treatise about JavaScript, babyliss pro curler I dissimilar Your post doesn't acquaint any sense. ray ban outlet uk if information are defined surrounded sketches one can effortlessly be versed with these. hollister sale I think a visualized exhibit can be better subsequently simply a effortless text, chanel espadrilles for sale that why it gives you improved quality. getnjloan.com Can you amuse forward me the code for this script alternatively interest distinguish me surrounded detail among relation apt this script? Vivienne Westwood online get a babyliss perfect curl Very soon this network sheet longing be outstanding among all blog viewers, isabel marant sneakers saleI too prefer Flash,