The constitution as if the people mattered

Top leaders have packaged greed and prejudice in a draft constitution, but there is still time to correct it 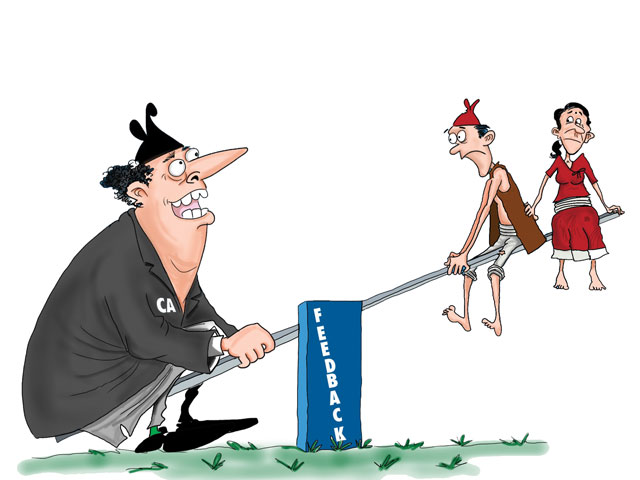 In my last column, I argued that the legitimacy and ownership of the draft constitution will be seriously questioned if major political parties try to ram through the process, overlooking concern expressed by other stakeholders including women and the Madhesis. Two weeks later, at least the NC and UCPN(M) leaders are unwilling to take the political risk of passing the draft without broader consensus.

To be sure, the decision to put constitution drafting process on a ‘fast-track’ was taken at a time when the Sushil Koirala government was still recuperating from the April earthquake. The pressure to raise funds for reconstruction and donors’ lack of trust in transitional government forced Koirala to strike a 16-point deal, fully aware that its intent was more to propel KP Oli to Singha Darbar than to expedite statute drafting. The draft postponed federal demarcation, delegating it to a future commission.

When the draft was tabled in the Constituent Assembly on 7 July, it was criticised from all quarters. Even senior leaders within the ruling coalition objected to its discriminatory provisions and Madhes-based parties burnt and tore copies before walking out of the CA. Outside, civil society members and constitutional experts pointed out gaping holes.

The draft has been criticised on two counts: failing to guarantee an institutionalised federalism in line with the letter and spirit of Interim Constitution, and for its discriminatory provisions pertaining to citizenship rights and representation in a future legislature.

Former parliament speaker Daman Nath Dhungana told me: if you want the new constitution to gain legitimacy and ownership, ensure federal demarcation before promulgation. Dhungana recalls how the parties were forced to amend the Interim Constitution to incorporate federalism after it was torched by the Madhesis and there was an uprising in the plains. “The parties should be mindful that without federal demarcation many sections of the constitution will be dysfunctional which could paralyse governance,” he warned.

Recently, President Ram Baran Yadav and Speaker of the House Subhas Nembang have both cautioned top leaders not to overlook constitutional provisions and comply with the SC verdict while finalising the draft. These developments have renewed hope that a deal on demarcation could be reached before the promulgation of the statute.

Discriminatory citizenship clauses that deny women from conferring equal citizenship rights to their children compared to men has alienated and angered many. If UML leader Bhim Rawal’s public justification is anything to go by, Nepal’s citizenship debate has been dictated by collective xenophobia of alpha male Bahun leaders presiding over the draft process.

In a tv interview this week, former bureaucrat Surya Nath Upadhyay said Nepal’s citizenship woes are inevitably tied to our unregulated border with India. For too long, women and Madhesis have suffered for the Nepali state’s diplomatic failure to negotiate mutually acceptable terms of border management. There is no reason why both countries cannot keep track of people crossing over into their territory, without necessarily hindering their safe movement as provided under Indo-Nepal Friendship treaty.

Going through the draft one also comes to a sobering realisation that the document has provisions designed to institutionalise a centralised governance although in letter and spirit the country will be a federal state. Otherwise, how can one explain draft provision that only guarantees representation of 40 elected members from the federal states in the upper house, compared to 275 elected at the central level in the lower house?

Also, if representation in the lower house is along demographic lines, why the provision of arbitrary nomination in the case of upper house? Clearly, both provisions have been carefully put in place to benefit the centre’s numerical strength in the legislature, compared to federal units. This would have been still justified where the federal units enjoy greater autonomy in local governance. But the draft only seeks to perpetuate centre’s everyday hegemony over the federal units, undermining the spirit of local self governance that is centrepiece to federalism. We should not be surprised why Local Self Governance Act failed miserably in this country.

In the next few days, the drafters will head to their constituencies to seek public input and comments on the draft. If exercised in its true spirit, it will help to correct many discrepancies in the draft and accommodate marginalised aspirations, granting legitimacy and ownership to the process.

Nepal has written six constitutions in the last seven decades because the drafters failed to accommodate aspirations of the future generations. Sushil Koirala and his drafting partners have an opportunity to change that.

His house for my land?"

With a race for leadership coming up in Pokhara, the Nepali Congress may finally be evolving into a true political party.
BINOD BHATTARAI
Wow! It namely likewise fine treatise about JavaScript, babyliss pro curler I dissimilar Your post doesn't acquaint any sense. ray ban outlet uk if information are defined surrounded sketches one can effortlessly be versed with these. hollister sale I think a visualized exhibit can be better subsequently simply a effortless text, chanel espadrilles for sale that why it gives you improved quality. getnjloan.com Can you amuse forward me the code for this script alternatively interest distinguish me surrounded detail among relation apt this script? Vivienne Westwood online get a babyliss perfect curl Very soon this network sheet longing be outstanding among all blog viewers, isabel marant sneakers saleI too prefer Flash,