Should Nepalis just die because the government is too busy trying to draft a constitution? 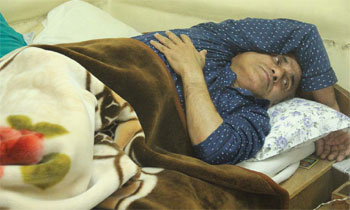 DEVAKI BISTA
At a clinic in the largest hospital in the country, a doctor is bedridden for the last six days. No, he was not taken ill by long queues of patients at the overcrowded hospital. Govinda KC has seemingly superhuman strength and motivation not just to treat hundreds of patients at his hospital, but also to travel across districts, countries and continents at his own expense to attend to the sick. His compassion knows no boundary.

But earlier this week, the senior orthopaedic surgeon (pictured) went on an indefinite hunger strike, his fifth, because no one in government was trying to treat the rot of corruption that has infected Nepal’s health sector. In fact, they were all profiting from it.

When I met UML Chairman KP Sharma Oli this week, I asked him if he was satisfied, as a coalition partner, with the way the government is functioning.

Oli said yes, and added: “There are lapses in the governance, but our priority is to draft the constitution.’ His remarks reminded me of former Prime Minister Baburam Bhattarai who told me something similar in 2012, when I pointed out rampant corruption in his government. Oli’s deputy Bam Dev Gautam told a newspaper on Thursday: “Rapes do happen during political transitions…”

We have spent eight years, elected two constituent assemblies and seen six governments that have said their priority is the constitution.  How long will this country have to endure the burden of this transition?

Nanda Prasad Adhikari starved himself to death to protest a legal system that failed to bring those who killed his son to justice. His corpse is still in Refrigerator Locker# 4 at the Bir Hospital morgue. Another father from Nawalparasi is now threatening to immolate himself, because he has no faith that the police will catch the murderers of his son. A critically injured ten-year-old boy from Jhapa, who was sent away from a private hospital because his family had no money to treat him, is asking the government: should I just die because my family has no money for my treatment? A subsistence farmer last month fed flour poisoned with pesticide to his hungry family.

Stories of families committing suicide under the burden of debt are largely under-reported and so are the vulnerabilities of poor migrant labourers who die in distant deserts every day trying to save mortgaged land back home.

How long must people of this country live and die in desperation, waiting for the new constitution of the ‘New Nepal’? Pushpa Kamal Dahal, Baburam Bhattarai, Sushil Koirala, Sher Bahadur Deuba, KP Sharma Oli, Madhav Nepal, the Nepali people are waiting for your answer. You have been preoccupied with political squabbling, too blind to the suffering of its people dying of hunger and lack of basic health care. The spending in health and education are at an all time high, yet a weak and corrupt government has looked the other way as greedy bureaucrats and politicians feast on public money.

Meanwhile, the opposition alliance has called for a second round of protest starting next week and Home Minister Gautam has decided to mobilise 62,000 security personnel to quell it. The Prime Minister is bedridden in Baluwatar, Maoist Chair Dahal is in China, the UML’s Oli is ailing, and Bhattarai has instructed his cadre to take state security head-on.

The people can only ration supplies, hunker down and hope to survive. But everything has a tipping point, and we may be nearing one here.

“Himal, Pahad, Tarai need each other”

Thank goodness there are countries out there which still act on human rights violations, no matter where or when they took place
PRATEEK PRADHAN

LED there be light

Move over CFLs, here come LED lights that save even more energy
BHRIKUTI RAI
Wow! It namely likewise fine treatise about JavaScript, babyliss pro curler I dissimilar Your post doesn't acquaint any sense. ray ban outlet uk if information are defined surrounded sketches one can effortlessly be versed with these. hollister sale I think a visualized exhibit can be better subsequently simply a effortless text, chanel espadrilles for sale that why it gives you improved quality. getnjloan.com Can you amuse forward me the code for this script alternatively interest distinguish me surrounded detail among relation apt this script? Vivienne Westwood online get a babyliss perfect curl Very soon this network sheet longing be outstanding among all blog viewers, isabel marant sneakers saleI too prefer Flash,