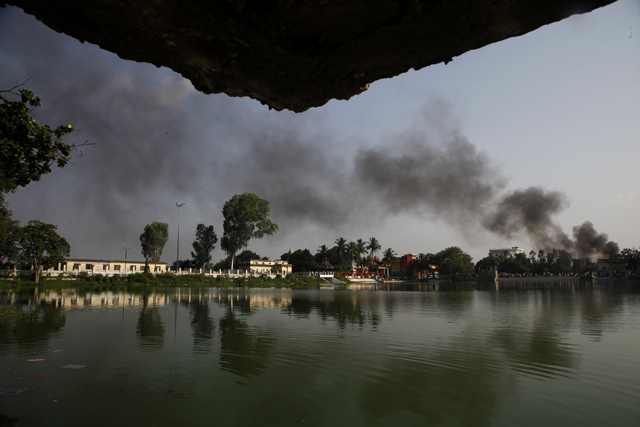 Four months after violence flared across the Tarai from Kailali to Saptari, the flames are still simmering in the plains.

As the protested spread and escalated, the state cracked down hard. By September, the blockade by Madhesi parties at major Indo-Nepal borders points, visibly supported by the Indian side, brought down the level of violence.

The activists moved to no-man's land, the violence subsided, but life across Nepal ground to a halt creating the shortage of petroleum products, medicines and other essentials. The country has suffered immensely, the economy is in shambles, state revenue is down as the supply system runs on smuggling, inflation and hoarding has pushed many into poverty. The blockade will push the development of the country back years. The survivors of the April earthquake have been left to fend for themselves, as an incompetent government found a good excuse for delays in reconstruction.

Looking back, it isn’t difficult to assess that disproportionate state brutality in response to fringe protests, forced the nation into cycle of violence that claimed 60 lives and injured hundreds. Many of them were ordinary people who had nothing to do with the Madhesi parties and its politics.

Politically, the state crackdown radicalised an entire region and demography, turning localised protests by defeated and unpopular leaders into a mass movement.

Under domestic and international pressure, and quietly abandoned by New Delhi, the Madhesi leadership is now struggling to keep people on the streets to maintain pressure on the government while it negotiates a safe landing at the table. But the way the uprising in the plains is fizzling out as winter sets in, without ensuring justice, is worrying.

Sudhir Keshari of Sarochiya in Biratnagar, whose young daughter was shot by police looking for fleeing protesters while she was resting inside her house, has a mouthful to say about the state of human rights in this country. Keshari’s pain and anger reminded me of Mihir Karn of Parsa, also a victim of police brutality, who had told me how this state was creating an army of angry citizens.

Listen to interview with Sudhir Keshari

Insiders within the Madhesi Front say the immediate concern of leaders like Mahanta Thakur now is to prevent the extreme radicalisation of people on the ground, preventing separatist elements like CK Raut and newly emerging armed groups from exploiting anger and alienation among young Madhesis, especially the families of victims. An open call by one such group for armed recruitment is disturbing, to say the least.

The top Madhesi leadership is also worried that younger leaders who were at the front of the movement, are looking ever more disillusioned and talking about resorting to hardline politics. Sadvavana leader Rajendra Mahato, who spent most of the last three months leading the blockade in Birganj expressed his frustration when I called him up this week.

Listen to interview with Rajendra Mahato

"Our movement is for rights and dignity within united Nepal and we are worried if this effort fails, the extremists will gain grounds and their agendas will prevail in Madhes," he said, expressing frustration that he is being misunderstood and misquoted in the Kathmandu media.

As with all political movements, Madhesi leaders have their partisan and personal ambitions at stake. But even they admit in private that the movement has outgrown their political interests, and now has taken on a broader objective of securing Madhesi dignity after the Kathmandu establishment rushed through the constitution.

After months of streets agitation, building human chains and staging a satyagraha, if those who have buried their dead, beaten and bruised are allowed to be disillusioned with constitutional remedies, there is an real danger this country could slide into a regional and separatist conflict.

Drawing parallels has its problems, but our political crisis does look disturbingly close to what Sri Lanka was facing when the majority Sinhala ruling class in Colombo chose to ignore demands for recognition and autonomy by the Tamil minority. Unfortunately, instead of understanding the complexities of the movement on the ground, UML and Maoist top brass are insensitivity to Madhesi sentiments as shown by the unilaterally tabled constitutional amendment proposal.

K P Oli and Pushpa Kamal Dahal must understand, it is not what amendments Kathmandu makes in the new constitution, but how it reaches out to its aggrieved population and makes them part of the process, that holds key to dousing fire in the plains.

… who will bell the cat?, Anurag Acharya

NK Dahal in Spacetime, 21 September
Wow! It namely likewise fine treatise about JavaScript, babyliss pro curler I dissimilar Your post doesn't acquaint any sense. ray ban outlet uk if information are defined surrounded sketches one can effortlessly be versed with these. hollister sale I think a visualized exhibit can be better subsequently simply a effortless text, chanel espadrilles for sale that why it gives you improved quality. getnjloan.com Can you amuse forward me the code for this script alternatively interest distinguish me surrounded detail among relation apt this script? Vivienne Westwood online get a babyliss perfect curl Very soon this network sheet longing be outstanding among all blog viewers, isabel marant sneakers saleI too prefer Flash,