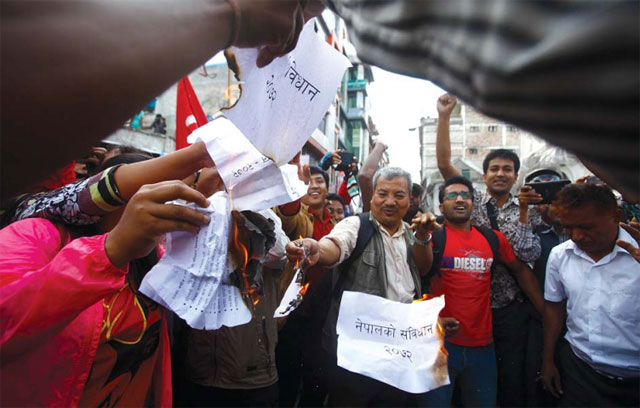 Undoubtedly, all these years of deliberations in the CA, protests on the streets and pacts signed behind closed doors should have yielded a much better document. But it is also essential to appreciate both complexities and limitations of this democratic exercise.

For common Nepalis, the entire purpose of the constitution was to reclaim their sovereignty which was repeatedly violated since the days of the absolute monarchy. For the political parties with diverging ideologies, it was a battle for contending visions of a ‘New Nepal’. Unfortunately, neither ‘we, the people’, nor the political groups representing us are a homogeneous category. There are layers of aspirations within the electorate and partisan agendas.

Our unflinching faith in this democratic exercise, overlooking its complexities and limitations, perhaps explains our disappointment. We may have forgotten that more than half the population were illiterate till two decades ago. Exploitative social relations between the stronger and weaker section of the population still exist and the political class is yet to internalise the essence of democracy. It is perhaps unreasonable to expect a bunch of conservative Brahmin men schooled in patriarchy and steeped in ultra-nationalism to suddenly shed their bias towards women and Madhesis.

The good news is that the fundamentals of this constitution have not betrayed us, and as long as the sovereignty rests with the people, there is no limitation to improving this document.

It is not the inequities enshrined by this constitution, but the mindset that conceive them should worry us. In a democracy that privileges the majority, if the parties with numbers on their side do not support an idea they can be criticised for it, but not coerced. But the intolerance shown by the government towards dissenting voices and the way state power was abused to suppress them in the name of restoring law and order is unacceptable and must be questioned.

To be sure, not all the protesters in the streets of Tarai towns belong to political parties. They have often resorted to vandalism and arson. The mob lynching of eight policemen in Kailali and one in Mahottari exposed the cruelty of the demonstrators and maligned the movement. But the way protesters are being shot dead at close range, many of them bystanders and children who had nothing to do with the protests, exposed the administration’s excessive use of force and bred more violence.

The international community including the UN have taken serious note of human rights abuses by security forces during the recent protests and refrained from welcoming the constitution. India, in particular has taken a strong diplomatic posture and expressed its displeasure about the way the constitution was declared and protests quelled in the Madhes.

Anti-Indian nationalism doesn’t help us now. By signing the 12-point agreement in New Delhi in November 2005, our leaders had accepted India as a stakeholder of this process. KP Oli and Pushpa Kamal Dahal are complaining now, but we have seen them dash off to Delhi for consultation before every major decision in the past.

In any case, instead of fuming over Indian interference, the leaders should focus more on getting their own house in order. Twenty Tarai districts have been shut down for over a month now, nearly 50 people have been killed, yet, none of the top leaders have visited these districts.

Prime Minister Sushil Koirala has cancelled his trip to the United Nations and is reaching out to the disgruntled Madhes based parties to address their demands. The Madhesis are engaging for now, but the two sides are still very far apart.

Meanwhile, Oli is in a hurry to be prime minister and will be exerting pressure on Koirala to step down. And that tussle will dominate the headlines in the coming weeks.

Making eco-tourism work for the people

A watershed in Nepals conservation history, ACAP struggles to keep going despite the insurgency.
SRADDHA BASNYAT in POKHARA

This week started off on a positive note and ended on a bad one.
ASHUTOSH TIWARI

There is a glimmer of something amidst the gloom.
DANIEL LAK

Individuals with vested interests in matters of national importance have an unchallenged monopoly of opinion in the Nepali media.
BINIT SHARMA
Wow! It namely likewise fine treatise about JavaScript, babyliss pro curler I dissimilar Your post doesn't acquaint any sense. ray ban outlet uk if information are defined surrounded sketches one can effortlessly be versed with these. hollister sale I think a visualized exhibit can be better subsequently simply a effortless text, chanel espadrilles for sale that why it gives you improved quality. getnjloan.com Can you amuse forward me the code for this script alternatively interest distinguish me surrounded detail among relation apt this script? Vivienne Westwood online get a babyliss perfect curl Very soon this network sheet longing be outstanding among all blog viewers, isabel marant sneakers saleI too prefer Flash,