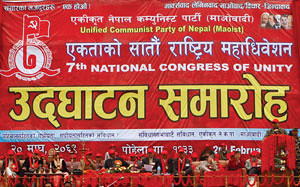 BIKRAM RAI
When Pushpa Kamal Dahal was addressing the 7th General Convention of his party in Hetauda this week, in the audience were international delegates from communist parties around the world.

By the time Dahal finished speaking, it was clear to them that the UCPN (Maoist) was finally letting go of the doctrine of violence. He was jettisoning justification of Stalin’s atrocities and the mass deaths that followed Mao’s Cultural Revolution.

“Revolution in the 21st century can neither emulate the Soviet model nor the Chinese one. We must find our own way as we move ahead,” he said. Unlike his earlier speeches, which disguised an incongruous adherence to obsolete ideologies, the Maoist Supremo went on to chart out a post-Prachanda path for his party.

His political document declares that Nepal is no more a semi-feudal and semi-colonised society, and that the objective conditions for an armed struggle do not exist any more. It states that the relevance of the ‘Prachanda Path’ as a guiding principle is over, adding that the party will now work to institutionalise achievements gained after ten years of war and 19 days of people’s movement by finalising and declaring a new constitution through the Constituent Assembly.

In an effort to gain international legitimacy, the governing Maoist party fast tracked rehabilitation and integration of its armed wing last year, following which the party was taken off the list of terrorist organisations by the United States. The latest change defines the evolution of the revolution and the party’s new civilian avatar.

The political document has no mention of class enemy, and unlike past documents does not decry Indian expansionism and US imperialism as the primary threat to Nepali nationalism. The concept of ‘revolutionary’ land reform has been replaced by a ‘scientific’ system, and the party has abandoned the earlier policy of confiscating private property and distributing it to the landless.

“Radicals will certainly be disappointed but social democrats who want a reformed Maoist party in peaceful competitive politics will welcome this change,” leftist intellectual Shyam Shrestha told me as we discussed the document.

To be sure, Dahal’s position paper fails to clarify the party’s position and commitment towards completing the peace process by establishing a Truth Commission and addressing war crimes. And there is still a long way to go before the party can truly behave like a non-violent democratic entity.

The leadership must reorient and discipline its cadre, especially in labour unions and youth wings, who are still gripped by a war era militant mindset and often resort to lumpenism. It must tolerate criticism and use democratic means to express dissent rather than threatening physical action against those who disagree with the party’s conduct. However, by renouncing violence as a means of acquiring power, the UCPN(M) has taken a bold step, and clearly the right one. For the first time, the party formally condemned left-wing extremism and dogmatism of its former Vice-Chairman Mohan Baidya and acknowledged that anarchist behaviour of former leaders like Matrika Yadav hurt its image in the Madhes.

By reaffirming its pledge to the 12-point understanding and commitment to drafting the constitution in partnership with other parties through a Constituent Assembly, the Maoists have sent a message to sympathisers as well as the opposition that they are willing to negotiate long-term space in mainstream Nepali politics. To the dismay of agitating opposition in the streets, the spotlight was firmly on Hetauda and not on their sparsely-attended and rained-out gatherings in various parts of the country. At a time when the political landscape looks as gloomy as the weather, this is a silver-lining for Nepali democracy, and one need not be a Maoist supporter to welcome it.

When there is so much to do to catch up, progress can be slow
ANURAG ACHARYA

"Let's not be the laughing stock"

Interview with former CEO of ActionAid International, Ramesh Singh Malla about the development lessons, achievements and challenges of Nepal

Democracy has to be locally responsive to deliver development
ASHUTOSH TIWARI

The tail rotor of a helicopter, whiskey bottles, rusted cans, oxygen cylinders and aluminium ladders
TSERING DOLKER GURUNG
Wow! It namely likewise fine treatise about JavaScript, babyliss pro curler I dissimilar Your post doesn't acquaint any sense. ray ban outlet uk if information are defined surrounded sketches one can effortlessly be versed with these. hollister sale I think a visualized exhibit can be better subsequently simply a effortless text, chanel espadrilles for sale that why it gives you improved quality. getnjloan.com Can you amuse forward me the code for this script alternatively interest distinguish me surrounded detail among relation apt this script? Vivienne Westwood online get a babyliss perfect curl Very soon this network sheet longing be outstanding among all blog viewers, isabel marant sneakers saleI too prefer Flash,