We need a firm commitment from political groups of the left, right, and centre for clean and non-violent polls 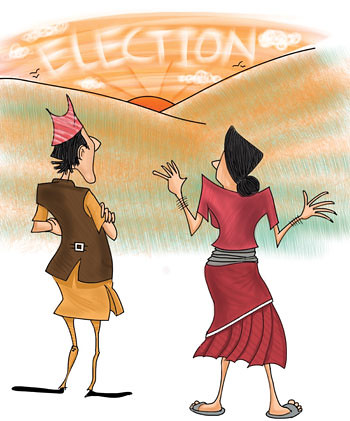 DIWAKAR CHETTRI
After nine months of to-ing and fro-ing over reinstatement of the dissolved Constituent Assembly, then a year of haggling over who should lead an elections government, Nepal will hold another CA elections later this year.

For an electorate that has been denied franchise for so long, it doesn’t seem to matter that no dates have been announced yet. In fact, opinion polls have shown that the majority of people are past caring when, or if, elections are held.

The political parties that are drafting election manifestos and getting ready to kick-start campaigns face an apathetic and disinterested public. The reason is that they have been let down so often by the same netas in the last four years. But despite widespread disillusionment, elections are still the safest and quickest way to bring a country derailed by a prolonged transition back on track.

Unlike earlier elections, this one is being held under a technocratic government made up of government managers, most of them batch-mates. This presents both opportunities and challenges. All we need now is a firm commitment from political groups on the left, right, and centre to participate in clean and non-violent polls and to abide by the code of conduct.

To be sure, emotions will run high and there will be heated exchange of words in the media and when leaders share a podium. But the parties must remember that elections are about winning over the people’s confidence and not just about defeating the opposition. The two are not the same. It is about what you will do, not about what the rival party will not.

Already there are worrying signs of the rhetoric getting out of hand. Leaders threatening to break the legs of opponents, candidates turning a contest of ideas into personal battles, and portraying the polls as a winner-takes-all game.??

Since few of the candidates can boast about performance, the elections will be a referendum on issues like the nature of federalism and forms of governance that remained contentious in the last CA. There may be two clear sides emerging, one led by the Maoist-Madhesi coalition and the other led by the NC and UML. Editorials and pundits are already presenting it as a fight to finish between ‘democrats’ and? ‘radicals’, between ‘progressive’ and ‘traditional’ forces. Elections should be about ideas, but mixing sectarianism, ethnicity, or regionalism into the campaign to rabble rouse would be disastrous.?

And we in the media must resist stoking fear and overtly taking sides and help moderate a charged political climate. The mainstream must overcome its bias and accept, until proven otherwise, that every political party contesting the election is a legitimate political force under Nepal’s interim constitution and poses no danger to the core values enshrined in it. As long as their political agendas and programs do not go against the spirit of the constitution, they have every right to seek popular endorsement for their programs through elections.

As an institution that has stood by democratic values, the media must maintain its own integrity, impartiality, and code of ethics. The fourth estate has an important role in creating an environment for free and fair elections that are fought on discourse, debate, and political programs rather than driven by subjective and often imagined categories.

For all the controversy it has generated, the party less technocratic government ensures that state powers are not abused for unfair advantage and once the Election Commission takes full shape, all stakeholders will be bound by its code of conduct. The deployment of the Army for election security could be an added safeguard against cheating and violence.

If Nepal is able to hold peaceful elections free from fear, winners will have a chance to push through programs in a future assembly for a stipulated period and we may finally have a constitution. No matter which side gets more votes, it will be a victory for democracy.?

Is what happened to Gorkha a sign of things to come?
Damodar Neupane in Kantipur, 20 April
Wow! It namely likewise fine treatise about JavaScript, babyliss pro curler I dissimilar Your post doesn't acquaint any sense. ray ban outlet uk if information are defined surrounded sketches one can effortlessly be versed with these. hollister sale I think a visualized exhibit can be better subsequently simply a effortless text, chanel espadrilles for sale that why it gives you improved quality. getnjloan.com Can you amuse forward me the code for this script alternatively interest distinguish me surrounded detail among relation apt this script? Vivienne Westwood online get a babyliss perfect curl Very soon this network sheet longing be outstanding among all blog viewers, isabel marant sneakers saleI too prefer Flash,