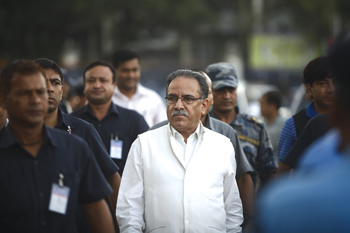 BIKRAM RAI
National and international attention is now on Nepal’s November elections which is expected to chart out a roadmap for the country’s political future through constitution drafting. The prospects of polls have brightened as all parties have grudgingly agreed to participate, but the painfully long transition has sucked out ideals and principles on which the institution of politics rests.

No political party in Nepal today can boast of a credible and stable leadership that deserves public vote of trust. The Nepali Congress has been embroiled in an intra-party feud between Koirala and non-Koirala factions for more than a decade now. The party has been all but stripped of its socialist history between leaders like Girija Prasad Koirala and Krishna Prasad Bhattarai in the past and now between Sushil Koirala, Sher Bahadur Deuba, and Ram Chandra Poudel. There is seething discontent among younger NC leaders impatient with the ageing and discredited leadership.

“How can we expect fresh vision for a new republic from a bunch of old men who refuse to unlearn and relearn?” a young NC leader asked at a program recently. The impatience has been heightened by polls which show that although more than half the electorate is still undecided, Congress leaders are ahead of the others by a slight margin.

Similarly, the UML has its own ideological and political disorientation to cope with. The exclusive all-Bahun leadership led to an exodus of Madhesi and Janajati leaders last year. The party is seen to be ‘regressive’ on inclusion and federalism. Besides, the UML is reeling under Jhala Nath Khanal’s fickle leadership, Madhav Nepal’s flip-flopping, and KP Oli’s reactionary politics.

The so called fourth power, the Madhesi Morcha is also enmeshed in a facade of unity amidst squabbling over leadership. The fear of losing out to the NC and the Maoists and some nudging from down South have forced the Madhesi parties to seek an electoral alliance. But there are good, bad, and the ugly here too, as netas jostle for influence in a region that now has more than half the electoral constituencies.

But the party which is undergoing the biggest political crisis at the moment is the UCPN (M). After the split, the largest party in former CA had hoped to establish its credibility and legitimacy nationally and among neighbours. However, power and greed have corrupted the top leaders, eroding their popularity and the Maoists will have lot of explaining to do when they face the public in November.

Some analysts see the resignation of party Vice-Chairman Baburam Bhattarai as a result of the power struggle with Dahal, while some project it as an exemplary act of sacrifice by the senior leader to make way for a younger generation. But the move seems to have been a strategic means to lay the groundwork to forge unity with Mohan Baidya led CPN-M. There is speculation that Dahal went into damage control mode after being cornered by Bhattarai’s resignation and forced all his top leaders to resign. By dissolving the party standing committee and politburo, Dahal may have centralised power in his own hands, but he has sent the wrong message just before elections.

Things are a little more complicated in the rump party as leaders like CP Gajurel and Netra Bikram Chand seem determined to quash attempts at unity and instead have floated the idea of forging an alliance with ‘nationalist’ forces represented by ex-king Gyanendra. The enemy of your enemy is a friend.

In any case, the UCPN (M)’s extended party plenum this week dissolved the internal democratic structure and reverted the party to a wartime leadership arrangement with Dahal as the supreme leader. For a party striving to build its democratic credentials, this is a grave setback and not to say that it will only dampen the Maoists’ prospects in the upcoming elections.

The leaders of the self-styled ‘high level political mechanism’ may be patting themselves on their backs for bringing national politics on track, but their legacy of bigoted leadership still threatens to destabilise this country. Their pretentions with democratic elections stand at odds with their internal authoritarianism.