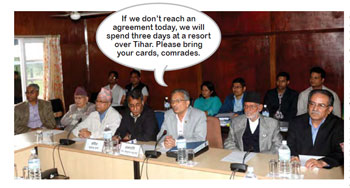 Some of the more discerning among you readers may have realised by now that we are in the midst of celebrating yet another festival. After killing and eating anything that moved over Dasain, we are now in Tihar, the festival in which we worship anything that moves. In fact, with Pashupati Nath as the patron deity of our secular federal republic, Nepal’s zoological society has by now appeased the vehicles of all our gods and goddesses by worshipping the animals in us.

One indication of the considerable respect and devotion we shower on our fellow creatures is evidenced in the way we pamper the higher mammals by allowing them free access to our national highways and street intersections. Every year, this adulation for our four-legged and feathered friends reaches a climax at Tihar when we set aside one day for specialised attention to each of them.

We started on Tuesday with National Crow Day to honour Yamaraj’s roving ambassador and plenipotentiary. Devotees get up early in the morning and travel to the banks of the Bagmati where crows can be found partaking of their communal breakfast on the city’s choicest garbage. We then proceed to offer them a plethora of sweetmeats which they totally ignore because (despite its name) a sweetmeat is vegetarian and the crows would much rather dine on a plethora of rotting cadavers. But it’s the thought that counts, and how appropriate that at least once a year we recognise the valuable assistance that crows provide to the Kathmandu Metropolitan City as volunteer scavengers and honour them in nationally-televised ceremonies.

Thursday is when we can say “Oh my dog!” and actually mean it literally. This is the day we have set aside to worship man’s best friend and to reward with treats Fido, Fuchhe and Lucky for being around when we need them most to provide us with security in these troubled times by yowling non-stop all night at everyone in general and no one in particular.

But disregarding our own personal discomfort and sleep deprivation, on Wednesday we got up at the crack of dawn on Dog Day to round up the neighbourhood dingo pack and feed them body parts of fellow animals, resisting the temptation to lace it with pulverised sleeping pills. This veneration of our nocturnal canine choir has a long and glorious tradition that has been passed down to us from the ancient Egyptians who even built pyramids to immortalise their dead pets. Giza has three of them: one for Fido, one for Fucche and one for Lucky.

Then comes Friday, which is Guy Puja and is set aside for none other than the holy cow. This is the day when you can call your boss a cow and mean it as a compliment. During the monarchy days, the cow was our national animal but in the new federal secular constitution we have it on good authority that the cow will be replaced by the donkey. Ahem.

Nevertheless, cattle still have the right of way in the major throughfares of the capital and this is an indication of the reverence we still accord our ex-national animal.

No other animals, not even those sitting in the High Level Political Mechanism have as much priority as Kathmandu’s urban livestock. The prime minister’s motorcade, on its way to the Gokarna retreat this week for a last-ditch attempt to write a new constitution, had to make a slight detour into the sidewalk when a bovine traffic island at Chabel refused to budge despite sirens and commandos armed to the teeth. So, we aren’t bullshitting when we say that we still care about cows.

In conclusion, and on behalf of all the animals who feel left out this Tihar, let me assure them that they are not forgotten. Ours is an inclusive people’s democratic republic now and this means all animals great and small have the right. to their own day of veneration. So, from next year’s Tihar, by presidential decree, we shall also mark Musa Tihar, House Fly Day, the Day of the Vultures and the Ass Puja Day.

The army sweeps into the Maoist heartland
RAMESWOR BOHARA

‘No room for fear’

This is a condensed version of Ganju Lamas testimony, based on the Sikkimese winner of the Victoria Cross interview with Radio Sagarmatha in 1999.

Bihar has Lalu, Brazil has Lula, what has Nepal?
CK LAL
Wow! It namely likewise fine treatise about JavaScript, babyliss pro curler I dissimilar Your post doesn't acquaint any sense. ray ban outlet uk if information are defined surrounded sketches one can effortlessly be versed with these. hollister sale I think a visualized exhibit can be better subsequently simply a effortless text, chanel espadrilles for sale that why it gives you improved quality. getnjloan.com Can you amuse forward me the code for this script alternatively interest distinguish me surrounded detail among relation apt this script? Vivienne Westwood online get a babyliss perfect curl Very soon this network sheet longing be outstanding among all blog viewers, isabel marant sneakers saleI too prefer Flash,