How to survive the mating season 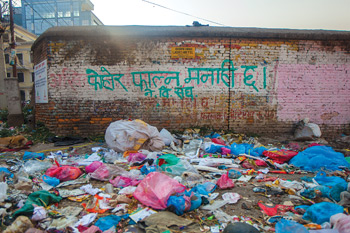 HARIZ BAHARUDIN
Why anyone would want to get hitched at a time when the country is engaged in the serious business of writing a new constitution is beyond me. The institution of marriage, however, has many advantages but till press time I haven’t been able to remember any of them.

As you young fellows and fellas of reproductive age who have had the pleasure of tying the nuptial knots of holy matrimony this week may have noticed, marriage is not just a popular card game in Nepal.

The institution of marriage is a legally binding contract between a man and his in-laws under which in exchange for a Yamaha 153cc, in which the groom can go vroom, he is obliged to sow his seeds to bring forth new human beings into the planet and live happily ever after until he is reincarnated, at which point he will have to do everything all over again.

Those of you addicted to card games will soon realise that you are in familiar territory because marriage is also a gamble. For instance, you could discover on your wedding night that the person you have chosen to be your lawfully wedded husband, because he is the son of a mover and shaker, is as hairy as a yak and snores like one. You win some and lose some.

But marriage is a compromise and as generations of couplets before us have discovered, the perfect antidote to a snoring spouse is to learn to snore yourself so you can drown out the nocturnal nasal saxophone, and turn a solo concert into a duet.

As someone who has been married for donkey’s years since the early Lichhavi period, I have some unsolicited advice to all you newly-weds out there about the birds and the bees and what they do to each other in the privacy of their hives.

Statutory Government Warning: At this time, any minors reading this are advised to go out and play in the swing.

** The most important part of a wedding is the marriage party which takes place simultaneously with 15,000 other parties all over town, including the 34-party Constituent Assembly at the BICC Party Palace. This is the acid test: if you survive Sgt Pepper’s Wedding Band you will survive anything married life has to offer.

** The wedding night. This is the second most important part of a marriage and the time when couples weigh their pros and cons and decide that, despite the armpit aroma, on the whole cohabitation is a fine invention.

** In a marriage one engages in the most intimate acts known to man: holding hands while watching the sun set, sharing Q-tips and listening to each other’s stomachs growl.

** For conjugal bliss, a marriage must be filled with love and passion, as you engage in mutual pleasure-giving by squeezing each other’s zits.

** Because it’s like having a room-mate for life, a marriage is about compromise between keeping the seat upright or not while attending to a long-distance call from nature. Wife: “Look, my aim is to keep this place clean, your aim would help.”

** No marriage is complete without unwrapping the wedding gifts. For some reason they are all replicas of endangered animals, like this bottlenose dolphin caught in blue crystal leaping over a wave on a glass pedestal simulating an undersea tableau. Great resale value, can be recycled to people who give you alabaster swans in future weddings. As marriage matures, it can also be used as a projectile.

Remember what worked, and just do it
BIHARI K SHRESTHA

City life is getting much worse than country life
CK LAL
Wow! It namely likewise fine treatise about JavaScript, babyliss pro curler I dissimilar Your post doesn't acquaint any sense. ray ban outlet uk if information are defined surrounded sketches one can effortlessly be versed with these. hollister sale I think a visualized exhibit can be better subsequently simply a effortless text, chanel espadrilles for sale that why it gives you improved quality. getnjloan.com Can you amuse forward me the code for this script alternatively interest distinguish me surrounded detail among relation apt this script? Vivienne Westwood online get a babyliss perfect curl Very soon this network sheet longing be outstanding among all blog viewers, isabel marant sneakers saleI too prefer Flash,