Ass
Just as it is not news that dog bites man, the new split in the Maobaddies did not make headlines. Which is a pity because it is an important development that carries on the grand tradition of binary fission in Nepal’s left-out parties.

This means Cash Baddies are nearly cashless, Dash Baddies have become dashless, and we are running out of punctuation marks to designate new Communist Parties of Nepal. Having made it to the Guinness Book for having the highest number of communist parties per capita in the world, Nepal has taken another great leap forward to maintain that lead with Comrade Big Plop breaking away from Baidya Kaka.

In order to help academics who are doing their doctorates on the glorious history of Nepal’s communists, we present here a glossary of communistic parties. Let me know if I have left out any of you. 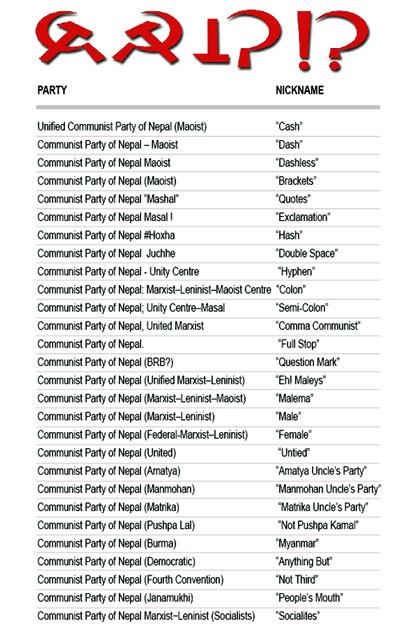 Comrade Big Plop boasted at the launch of his own party the other day that he had 3,000 guns. Whoa. Those must be the ones that PKD once said had been washed away by the river, how he must be regretting lying to UNMIN about the guns he hid. Dashless ex-gorillas seem to be behind the spate of Robin Hood bank robberies in recent weeks as a part of the party’s fund-raising drive. Com Plop also warned that his vigilantes will now go after crooks. Good idea, takes one to know one. Maybe he should start with the CIAA. Or maybe he should investigate  the corrodes spent on solar street lights some of which have already stopped working because of dust accumulation on the PV panels.

Speaking of SAARC, here are some Summit tidbits that somehow didn’t make it to the news:

Raindrops keep falling on our roofs

Small is still beautiful in this oasis in the middle of Nepalganj.
MEGH RANJAN RAI
Wow! It namely likewise fine treatise about JavaScript, babyliss pro curler I dissimilar Your post doesn't acquaint any sense. ray ban outlet uk if information are defined surrounded sketches one can effortlessly be versed with these. hollister sale I think a visualized exhibit can be better subsequently simply a effortless text, chanel espadrilles for sale that why it gives you improved quality. getnjloan.com Can you amuse forward me the code for this script alternatively interest distinguish me surrounded detail among relation apt this script? Vivienne Westwood online get a babyliss perfect curl Very soon this network sheet longing be outstanding among all blog viewers, isabel marant sneakers saleI too prefer Flash,