Signs of the times

Ass
Now that the #WorldCup and the #UMLConvention are both over, the country can move on to the next point on the agenda, which is to speculate about Clown Prince Paras and the soup he has got himself into again in Thailand.

Luckily, the Thais have a soft spot for royalty and ex-HRH can thank his lucky stars he wasn’t in Singapore when caught with pot, because he’d be facing a firing squad by now. Meanwhile back home, Clown Prince Comrade Prakash, whose sowing of wild oats has been a source of great embarrassment for his awesome Dad, seems to have mended his ways and has taken to raising pigs.

We were happy to see that the Underfed Marxist-Leninists decided to reinstate portraits of their patron saints Comrade Karl and Comrade Vlad inside the Convention tent last week, but only after the departure of invited foreign delegates. The UML are finally true Euro Communists because of the €€€€ they get from party faithful in Europe.

To move with the times, the Marxbad-Leninbads debated whether to rebrand and reposition the party by shedding the hammer and sickle flag. The comrades are in the horns of a dilemma: they have to distinguish themselves from the Baddies who have the same symbol, but on the other hand  they have to show that they haven’t dumped the dream of transforming Nepal from a Himalayan Shangri-la to a Communist Utopia.

The party took a great leap forward by staging a high-tec convention last week, although the drone it deployed at the inaugural ceremony very nearly decapitated the entire Bum Dev Clique as it lip-synced the Internationale from on stage. If the UML party symbol is to be changed, the Ass would suggest the following makeover to reflect its new technocratic image: 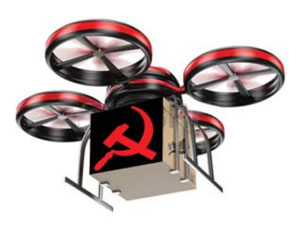 And while we are at it, we could also revamp the Nepali Congress flag. Everyone has forgotten what the four stars stand for, so we have changed the flag to remind us of the constant infighting. 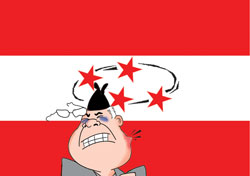 There is a great deal of soul-searching going on within the Cash Maoists after its election defeat, so here is a suggestion for a new party mnemonic to reflect its fresh new outlook. 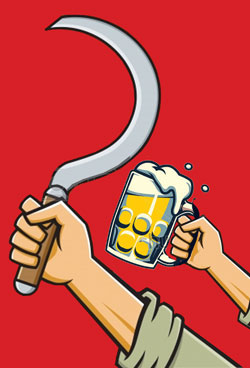 And how can we leave out the Dash Baddies and their constant threats to take the country back to war? They too need a makeover to reflect their pyrotechnics with this new icon. 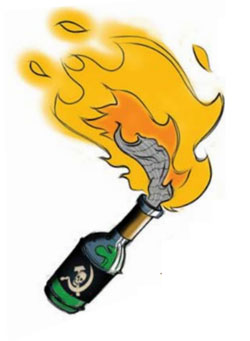 Many in Nepal still bear scars of the war

Just doing away with the king is not enough