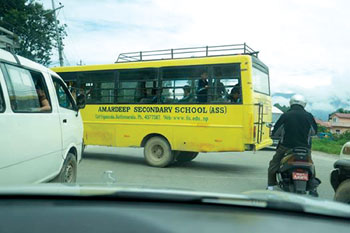 As a bonafide Ass, I can say with reasonable conviction that some people are complete manholes. And there is one day in the year when Nepali alfa males can make even bigger manholes of themselves than they would on other days in the year. And that day was last Monday, when the government thoughtfully declared a horriday in Kathmandu so us guys could make Jack asses of ourselves. It is an indication of Nepal’s improving gender parity and inclusiveness that this year, you gals out there also went out of your way to make Jenny asses of yourselves.

But the question troubling all able-bodied Nepali males of reproductive age is this: did we fully use the opportunity provided to us during this year’s Guy Jatra to stoop to an even lower level of debauchery than we usually do? Can we in our heart of hearts say, with full self-assurance, that our level of idiocy meets international standards? Unfortunately, the answer to both questions is: Yes and no.

It is only now becoming clear that we have been seriously lax on the irreverence front since the promulgation of the Interim Constitution, we take ourselves far too seriously, and must make up for this deficit in the current fiscal year by stooping even lower to be insufferable. Why do only snowmen have the right to be abominable?

Guy Jatra was a day we gais could have made up for lost time by taking rapid strides in the arena of  farce and buffoonery, forgetting our cares and worries, letting our hair down, and casting aspersions about the gender, if any, of the Rt Hon Prime Minister and members of his and/or her cabinet.

Why exactly this particular festival ended up getting the sex of our rulers mixed up has a long and glorious history which I will tell you about in the run up to next year’s Guy Jatra. Suffice it to say that this week us macho menfolk of the new federified republic got temporary license to make even bigger oxymorons of ourselves than we usually are by carrying out the grooming rituals of Nepali manhood, including: