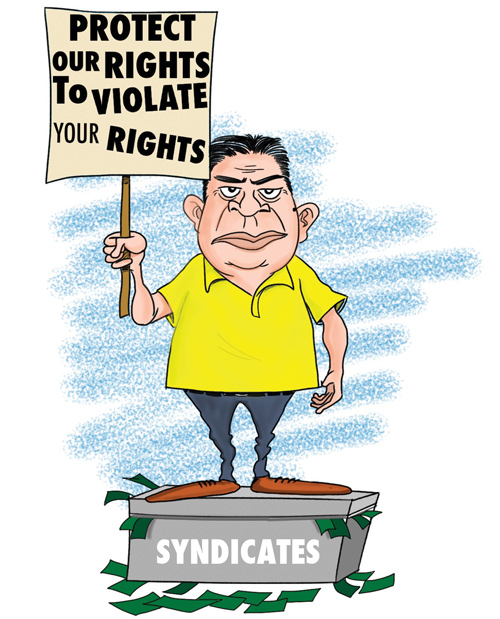 
Those of you who are downhearted watching the news about fake doctors, fake pilots, fake gas cylinders, fake bank notes or fake Oakley shades in Thamel should remind themselves, like I do here every week, that since just about everything in this country is fake, none of the bad stuff is actually real either.

In other words, this is not the real Nepal. Whatever is happening here is not really happening. There is a parallel universe out there somewhere in which the actual Nepal exists in real time, and if it is not Switzerland already, that Nepal is at least a Swaziland.

The point I’m trying to make here, in the Ass’ usual convoluted fashion, is that there is a silver lining in the clouds at the end of the tunnel in all this. Everything is hunky-dory in the boondocks in the real Nepal out there in the vast cosmos, and what we see around here is actually a pretend Nepal where everything is fake.

In other words, the fake government has cunningly allowed an underground economy to flourish in which counterfeit Benson & Hedges made in Wuhan floods the market because, as the world’s 155th poorest country, we cannot afford to smoke the real thing. (Statutory Government Health Warning: As If We Care. It’s Going to Kill You Anyway, So It Doesn’t Matter What You Smoke.)

We have to learn to live within our limited means. It does not behoove us to indulge in conspicuous consumption and snobbishly insist on only buying expensive, original designer stuff.

And thank goodness we have the underground economy, because if we had only relied on MinFin, we’d all be doomed. Some people say that Nepal’s economy is propped up by the fixed exchange rate with the Indian rupee. Not true. It is propped up by counterfeit Indian 500 rupee notes, and at the rate the fake currency is circulating, INR is going to be declared legal tender in this country just like in the good old days. So, unlike most people, I am not worried that the diesel at the pump is adulterated, the gulab jamuns at weddings are made of flour, or that our bottled water is diluted with sewage. What all these knock-offs prove is the ingenuity and the can-do-do attitude of Nepal’s fake entrepreneurs and their remarkable ability to launch unrealistic products that turn into viable businesses.

Here are some more ideas

to make a slew of new forgeries:

Fake Wildlife Contraband: Here is a wild idea to control the poaching of endangered species. Start shipping fake rhino horns and artificial tiger wee-wees to China. Customers won’t be able to detect the real thing, and poof! the bottom will fall out of the market. Ditto for yarsagumba: just use plastic caterpillars and false fungi.

Pseudo-Prado: These are knock-offs of the actual Mitsubishi 4WDs, but for a fraction of the cost. So, if you are a politician, all you have to do is to be only half-corrupt to be able to afford one of these pretend Pajeros.

Quasi-Diesel: Instead of pure diesel, which is expensive, you can power your generator with this fuel that is actually high-octane and highly inflammable Bagmati water.

Phoney-Telephony: These designer mobile phones with names such as Nakia, Sonny, and Mutterola serve their purpose since we keep getting cut off anyway.

Sham Shampoo: Squeeze out a liberal amount of Head Over Shoulders shampoo with conditioner, rub gently over scalp, and rinse. Careful, now, we don’t want the wig to fall off.

Fake Federalism: It doesn’t matter how many provinces we have, because the boundaries are all imaginary.

Copycat CIAA: Thinks it is the CIA.

INR 1,000 Note: Even the counterfeit Indian currency detected in the false bottom of an imitation Delsey suitcase were found to be copies of copies. But lucky we have them, because we can pay IOC with fake bills for fake fuel.

Counterfeit Constitution: What do you expect from a document drafted by fake revolutionaries?

Pretend Ass: Even this column is fake because the lies we make up are actually true. This column is so substandard that the Department of Food and Other Iffy Stuffs has declared it unfit for human consumption.

Maoist Chairman Pushpa Kamal Dahal spoke to his cadres on Sunday in a closed session once more leaked out to the public. The party's ultimate aim, he maintains, is still to capture power through revolt. Translated excerpts of the leaked audio tape: