Glad to be sad 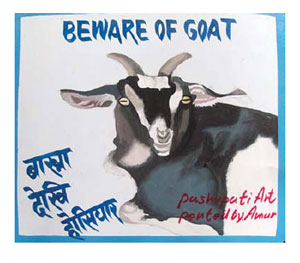 Another one of those international surveys by Gallup this week decided that Nepalis are among the Top Ten Unhappiest People on the surface of the planet.

So far so good. We are right up there with the Sudanese, Bosnians and Herzegovinians, and Afghans as some of the truly most hopeless humans ever to have the misfortune of being born.

This is a great honour and recognition of the effort that successive national gobarments in Kathmandu have put in to ensure that we are consistently miserable. And so, to celebrate this momentous and historic accomplishment of making it to the list of the saddest countries in the world, the Cabinet should declare three days of national jubilation forthwith. And we can use the commemoration to mope, brood, sulk and figure out ways to be even sadder than we already are in the next fiscal year.

At the rate we are going, it will be easy for Nepal to beat the Herzegovenese and their wretched Bosnianite comrades in next year’s Global Gallup Happiness Poll. We are a nation that takes our unhappiness seriously. Let’s face it, we’d be really miserable if we stopped being miserable. How would we ever spend our days if we suddenly had a clean and competent grovelment, electricity 24 hours a day, no garbage on the streets, all the water you could drink straight off the tap, and luggage that arrives 10 minutes after you land at Triceratops International Airport? There would be no reason to whine? And what would your dear Ass write about?

Happily, Nepalis are a cheerful lot. We are happy to just sit around and complain about how unhappy we are. If the glass is half-full, for instance, we don’t wallow in our sorrow, we just toss it down neat. If there is a light at the end of the tunnel, we are convinced it’s a locomotive headed our way. Before we toss a coin, we say: “Heads you win, tails I lose.” And we see a dark cloud behind every silver lining.

We need to maintain our lead in the World Sadness Index, for which we need a national 8-point strategy to overtake Serbia in the Sadness World Cup next year:

1 Reduce the tax on booze, cigarettes and morphine. This is a great way for us to anaesthetise the general populace from pain in this life so that in our next incarnation we will be born in Bhutan, the world’s happiest place. To give credit where it’s due, the original idea of measuring national bliss emanated from none other than King Jigme the Glad who reigned over a country that has achieved one of the highest per capita happiness on earth, a feat accomplished by making 100,000 Bhutanese sad.

2 Legalise marijuana and ecstasy. This is already happening in some US states. Speaking of which, America takes its national motto (‘Life, Liberty and the Pursuit of Happiness’) very seriously indeed and it has been doing this by making people in the rest of the world consistently miserable for about half a century now. We in Nepal are not so selfish: we take pride in being able to make others happy even if it means being temporarily sad ourselves.

3 Nepal may score somewhat low on the Gross Domestic Glee Index, but look at it this way, we are now so used to hardships that we will survive anywhere in the world.

4 Expedite setting up a National Commission on Happiness, which has been delayed because some political parties are unhappy about the selection of a pre-paid political appointee as Chief Commissioner.

5 We must find other indices that will more accurately measure our well-being, if any. For example, the Toilet Seat Index is a precise gauge of our burgeoning standard of living and tracks Nepal’s transition from a squatting to a sitting position.

6 The Bagmati Olfactory Ratio (BOR): The intensity of vapours emanating from the river in a nation’s capital indicates how satisfied a citizenry is. There is a strong correlation between the NEPSE Index and the BOR. In other words, if the smell at the bridge is really bad you can be sure the stock market has gone up.

7 Casino Coefficient: When it comes to risk-taking and gambling on our future no other country comes close to Nepal in the game of National Russian Roulette.

8 Instant Noodle Quotient: In terms instant noodle consumption per head, Nepal has now easily overtaken its closest rival, Thailand. Combined with the Beer Belly Composite Index, it will make us ponder: what’s there to be happy about?

We want a happy ending

Knowing the value of freedom after its gone
SALIL SUBEDI

Our boys bring home the cup

May Day, May Day!

A Rhododendron Revolution could blossom in Nepal too
CK LAL

Charting our own path

How to help re-engineer democracy by devolution
BIHARI K SHRESTHA
Wow! It namely likewise fine treatise about JavaScript, babyliss pro curler I dissimilar Your post doesn't acquaint any sense. ray ban outlet uk if information are defined surrounded sketches one can effortlessly be versed with these. hollister sale I think a visualized exhibit can be better subsequently simply a effortless text, chanel espadrilles for sale that why it gives you improved quality. getnjloan.com Can you amuse forward me the code for this script alternatively interest distinguish me surrounded detail among relation apt this script? Vivienne Westwood online get a babyliss perfect curl Very soon this network sheet longing be outstanding among all blog viewers, isabel marant sneakers saleI too prefer Flash,