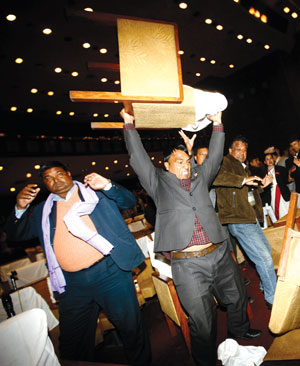 Some members of the elite cl-asses deliberately fail to understand the national outrage and the legitimate outpouring of virtuous anger that manifested itself in the destruction of a measly Rs 3 million worth of furniture in the legislature-parliament in the wee-wee hours of Tuesday. Rs 3 million is peanuts compared to the Rs 3 billion meant for ex-ladakus in cantonments that went into the wallet of Comrade Maximus & Co. And it is a drop in the ocean out of the Rs 30 billion we lavished in eight years of running a Constituent Ass-embly.

Why are we worried about the furniture anyway, it was gifted by the People’s Republic and can easily be replaced with another bilateral grant. After all, no price is too high to defend the right of Nepalis to cut our country into little pieces so we can remain poor. Parliamentary decorum is only for the hoity-toity comprador-bourgeoisie running dog of imperialism belonging to the monopoly capitalist class enemies among the neo-reactionary blood-sucking landlords, anyway.

When arsonists were behaving like arses torching taxis and motorcycles on the streets outside, how can you expect their colleagues in the assembly to turn the other cheek? After all, it is too much to ask an honourable member of the CA to maintain parliamentary decorum after he had made several trips to the female toilet to partake of swigs from hip flasks. How can we expect members of the opposition to sit idly by while the parties with a majority in the August House tries to go for a vote? Is that the democracy we fought to restore and protect?

Besides, what’s so unusual about a brawl in parliament? It is a common occurrence in other more mature democracies with high rates of economic growth. In Taiwan they have frequent fistfights on the floor of their legislature, the honourable members of the Korean parliament grab each other by the collar from time to time, and the Georgian house has witnessed full-scale hand-to-hand combat.  Which is why it is great to see that Nepali lawmakers are leading by example yet again to make sure that democracy is protected by its maximum application, safeguarding the right of every elected representative to not just speak into microphones but also aim it as a missile at enemy legislators.

It is typical of the over-reaction shown by the CA secretariat that they now want to nail down the benches so they can’t be hurled through the air. This is a violation of universal norms of Westminster style parliamentary democracy. Bolting microphones down to the tables is a fundamental infringement of international treaties on freedom of expressionism of which Nepal is a signatory. We have to understand why chairs were being thrown around: because this entire exercise was not about the constitution, but about who gets to sit on the chair next. To strengthen our democracy to protect our civil and uncivil liberties, the following urgent steps need to be taken to make the Great Hall of the People a true symbol of the state of Nepal’s democracy:

1. The CA is henceforth declared a hard hat area. All members are required to wear crash helmets, shoulder pads, rib protectors and groin guards at all times.

2. A fully-stocked bar will now be opened in the CA lobby so that honourable members do not have to sneak into the female toilets to muster the courage to storm the rostrum and manhandle the Chair.

3. A Personal Security Shop will be opened in the vestibule so MPs can stock up on pepper spray, stun batons, smoke grenades and self-defence knuckles for future fights. Sacks of chilli powder will also be sold.

4. The CA will henceforth also double up as a training facility for the Nepali Olympic Team to practice weight-lifting, javeline throw, shot puts, Greco-Roman wrestling, karate and tae-kwondo.

5. All marshals will be trained in the marshal arts so they can defend themselves and use CA members as punching bags.

6. A trauma centre with triage will be constructed in the CA premises to administer first aid to CA members wounded in the frontlines.

7. Sell tickets to the public in the balcony at premium rates so they can be entertained with World Wrestling Federation-approved fights. A bucket of popcorn free for all customers.

8. Provide honourable ex-guerrillas with paint ball guns so they can re-enact memorable battles from the conflict days in the floor of the house and have fun while finalising the constitution.

9. Fully inflatable dummy Chair so that if attacked the real Subhas Nembang will be safe in his chamber.

10. Install a timer with dynamite underneath the floor of the August House so that the next time it doesn’t meet a deadline to promulgate a constitution it will self-destruct.

For a credible election , the government must fix the tarais security mess
JOHN NARAYAN PARAJULI

"Fitting reply to those who call us terrorists"

Nepal, 8 July
Wow! It namely likewise fine treatise about JavaScript, babyliss pro curler I dissimilar Your post doesn't acquaint any sense. ray ban outlet uk if information are defined surrounded sketches one can effortlessly be versed with these. hollister sale I think a visualized exhibit can be better subsequently simply a effortless text, chanel espadrilles for sale that why it gives you improved quality. getnjloan.com Can you amuse forward me the code for this script alternatively interest distinguish me surrounded detail among relation apt this script? Vivienne Westwood online get a babyliss perfect curl Very soon this network sheet longing be outstanding among all blog viewers, isabel marant sneakers saleI too prefer Flash,