Without further ado around the bush 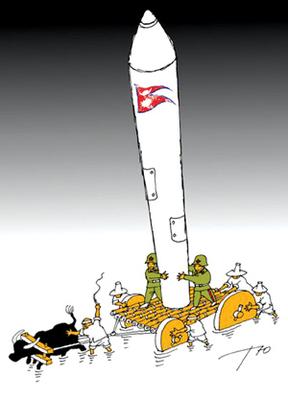 Amidst the frenzy of the everyday rat race, daily commutes, keeping up with the Jains, and spending five hours a day watching videos of dog tricks on Facebook, it is understandable that you don’t have time to keep yourself up-to-date with earth-shaking global and national events. In case you hadn’t noticed, we had an earthquake here last year followed by a five-month blockade.

Being a newspaper of record, we take very seriously our responsibility to defend the public’s right to say “no”. It is, therefore, incumbent on the Ass to do periodic swift recaps of events to keep you all abreast of goings-on in Nepal which, let me be the first to inform you, has just fallen two notches on FP’s Fragile States Index. This means we are now a failed state that is failing marginally more spectacularly than we were failing last year. Without further ado around the bush, let me list here some of the major accomplishments of the K P Oligarch grumblement:

Among all the glad tidings this week, this was the one that took the cake, as it were. It  warmed our cockles, so to speak. Stupendous news that the country with one of the highest per capita hydro-electricity potential in the world can now forget about hydropower because henceforth and heretofore nuclear power plants will be sprouting like yarsagumba all over Dolpo and Mustang. This being Nepal, however, there will always be anti-nationalist nay-saying nabobs who will try to downplay the significance of this discovery. But we are reassured because a nation that can take 8 months to fix a broken down baggage carousel at its only international airport can do anything if it puts its mind to it. The dawning of the Atomic Age in the Federal Radioactive Republic of Nepal means that we can now follow the DPRK model and embark upon a clandestine program to produce weapons-grade plutonium so that no one kicks us around when we take kickbacks on centrifuges. The next logical step is to attach our warheads to intermediate range ballistic missiles and fire them into the Bay of Bengal near Vishakapatanam from time to time to deter any future Blockades. 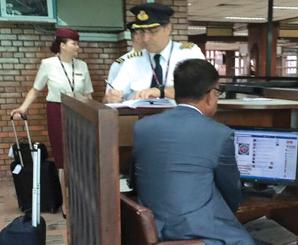 Minister of Environment and Copulation, Bishwendra Paswan has singlehandedly contributed to boosting the country’s GDP by taking the personal initiative to fly out 15 fellow-Nepalis to the Climate Change Conference in Paris by fobbing them off as members of Nepal’s official delegation. The 15 are now researching the impact of global warming at various Indian restaurants in Barcelona and Lisbon. By allegedly pocketing 17 lacks from each climate expert in his entourage, the minister made a cool 2.5 corrodes, thus allegedly reducing Nepal’s national poverty rate by an estimated 1.75 percentage points.  Another member of the Oli Gobblement, Agro Minister Comrade Horrible Gajurel last week demonstrated how Nepal can be self-sufficient in rice by planting paddy in a flowerpot. He follows the illustrious footsteps of his touchy-feely predecessor who last year went knee-deep in mud to personally reach out to farmers of the female persuasion. 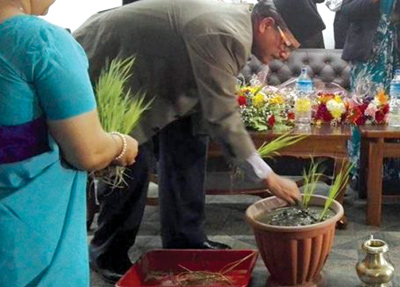 The world got its first underwater electric crematorium this week when the brand-new facility at Pashupati was knocked out of action by a flood on the Bagmati. This was just as well because NEA raised electricity tariffs by 20% which would have meant the crematorium would have gone belly-up anyway. Load-shedding has been reduced by two hours in the Chabahil area because the crematorium was using enough electricity to supply 2,500 households.

The Ministry of Marxism, Leninism and Tourism has designated a hillock in the Khumbu region as a standby Mt Everest for mountaineers who want to fake their ascents of the world’s highest mountain, and where they can take selfies to be photoshopped later. Liaison Officers will be on hand to sign fake certificates, and they can be paid with counterfeit Indian 500 rupee notes.

Two banks are sinking. How soon will they go under?
NEPALI TIMES INVESTIGATION

Words cannot adequately describe the joys of a Hermanns bakery product.
ALOK TUMBAHANGPHEY
Wow! It namely likewise fine treatise about JavaScript, babyliss pro curler I dissimilar Your post doesn't acquaint any sense. ray ban outlet uk if information are defined surrounded sketches one can effortlessly be versed with these. hollister sale I think a visualized exhibit can be better subsequently simply a effortless text, chanel espadrilles for sale that why it gives you improved quality. getnjloan.com Can you amuse forward me the code for this script alternatively interest distinguish me surrounded detail among relation apt this script? Vivienne Westwood online get a babyliss perfect curl Very soon this network sheet longing be outstanding among all blog viewers, isabel marant sneakers saleI too prefer Flash,