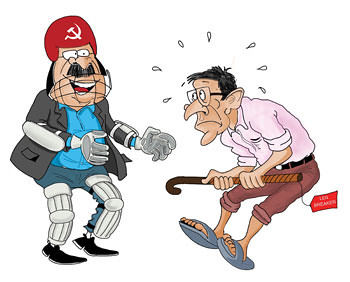 DIWAKAR CHETTRI
Kiran Kaka got a bit carried away in Kavre the other day and said his followers would break the legs of BRB and PKD if they came to campaign in his constituency. Something hasn’t quite worked out in the hard bargaining between the Dashies and Cashies and the Ass’ guess is it’s something to do with hard cash. Dash Baddies haven’t yet registered their party with the EC, so they must still be holding out for the possibility of a last minute alliance. An unholy dalliance of Baddies and Maddies, meanwhile, will keep them out of each other’s turfs. May backfire, though, sticking together may just remind voters that the Maodeshi Coalition was the most corrupt government this country ever had since the Lichhavi Era.

It must have been really frustrating for the eight bahfuns inside 4-walls who lead the 4-party Mechanism to come up with names to fill up the 11-member cabinet. The High Priests want people who are not too independent and token women who are yes-men. To head constitutional bodies, they looked for candidates who are loyal, but settled for a royal.?

The Donkey, being a wise guy, thought it had seen it all. But the proposal from the Gang of Four Bahfuns to make Loktantra Man Sing the head honcho of the Commission for the Investigation of the Abuse of Authoritarians was a reminder that we ain’t seen nothing yet. This is like making a poacher a zoo-keeper. PKD seems pretty desperate to ensure he won’t suffer JP’s fate.

The reason their appointments were delayed was because the Mechanism bargained hard into the night to push nominees who had been lobbying hard with top brass, even offering dough and/or moolah to party coffers as advance for their appointment. But the man who is really ticked off is Comrade Lila who now has to take orders from colleagues whom he outran to become Chief Sec just a few months ago.????

When the UN was collecting all the Baddie guns to put into containers in 2008, they got mostly rusted muskets and 303s. Chairman Lotus Flower, when asked some time later what happened to all the M-16s and AK-47s, answered famously: “They were washed away by the river.” Now, PKD has tried to allay fears that the rains may wash away elections. He has predicted elections are possible in June because the rains will be late this year. This is the earliest monsoon forecast the Ass has heard. We should also make Comrade Awesome the DG of the Dept of Meteorology in charge of long-term forecasts and climate predictions.

The Mechanism is still stuck on the date for elections. Not just RCP, even godless Commies who swear by Marx, Lenin, and Stalin first want to consult the astrologers about planetary alignments before they agree on a date. Chief Regmi, being a god-fearing man, also wants the stars aligned. So, expect a date as soon as meteorologists and astrologers agree on it.?

After arresting people with long hair, the next target of Kathmandu’s Finest, according to a Police press statement this week, are kids throwing water-filled balloons over next week’s Holi days. But if you are a murderer that the Supreme Court has convicted to life imprisonment, that’s perfectly fine. This way to the podium, Sir.?

The last topic on our agenda this week is the strange uttering of Comrade Octopus who was overheard telling sidekicks: “BRB’s utility is finished.” Was he speaking as himself or was he echoing the view of the DO who helped extradite his wife from Pune?

And the headline of the week must be: Indian Chicks Seized At Border.

The Nepali Times guide to where to go, what to drink and how to write new headlines for the New Year
MALLIKA ARYAL

Where do you want to be on New Year’s Eve?

Year of the eclipse

2006 will see four eclipses and spaceships to distant planets
KEDAR SHARMA BADU
Wow! It namely likewise fine treatise about JavaScript, babyliss pro curler I dissimilar Your post doesn't acquaint any sense. ray ban outlet uk if information are defined surrounded sketches one can effortlessly be versed with these. hollister sale I think a visualized exhibit can be better subsequently simply a effortless text, chanel espadrilles for sale that why it gives you improved quality. getnjloan.com Can you amuse forward me the code for this script alternatively interest distinguish me surrounded detail among relation apt this script? Vivienne Westwood online get a babyliss perfect curl Very soon this network sheet longing be outstanding among all blog viewers, isabel marant sneakers saleI too prefer Flash,