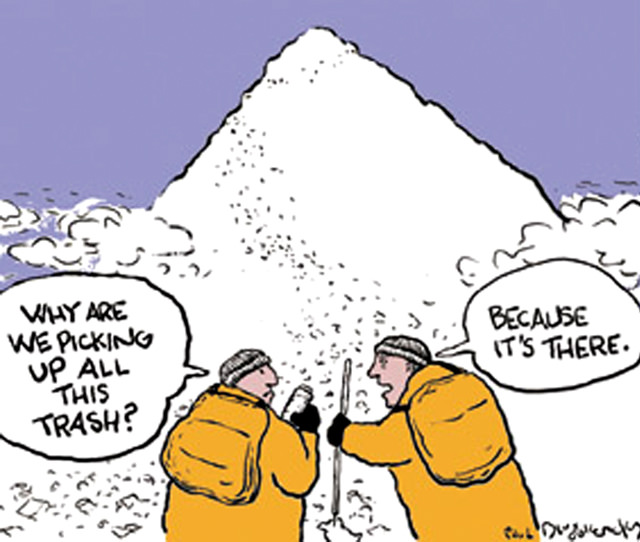 Since it had nothing better to do, GONe has gone and set up a Task Force to determine the exact height of Mt Everest. Why on earth would the grumblement want to do that? What if the new measurement showed that the mountain is actually much shorter, and it is no longer the highest point on the planet? Worse, what if while geo-locating Mt Everest they found that recent earthquakes have pushed the summit northwards into Chinese air space? Whatever the Task Force finds out, it should never be made public. Imagine the dent it would make on our territorial integrity, sovereignty and gastroenterology as a nation.

Most Nepalis think Mt Everest is in Nepal because that is what we are taught in school. Here, I will let you in on a closely guarded secret, if you promise not to blurt it out to anyone: the text books are wrong. Actually only the south face of Everest is in Nepal (I am not making this up) and the East, North and West faces of the mountain are all in China. But, shhh, no one should ever know, so don’t go around leaking that information. We should never let the cat out of the bag, especially at a time when our national ego is so fragile. Imagine the ignominy and shame. How could we hold our heads high again among the community of nations? I can already hear the jokes: “Honey, they’ve shrunk Everest!”

And what will become of all the enterprises that are named after Mt Everest if the mountain is no longer Numero Uno? What will the proud owners of Mt Everest Restaurant and Bar (credo: ‘Get High Here’) do? Everest Bank will be forced to change its slogan (‘Our Interest Rates Are Highest’). Everest Hotel can no longer proudly say that it is ‘Nepal’s Top Hotel’ and will have to merge with Summit Hotel. Everest Nursing Home (‘We Won’t Let You Ever Rest’) will have to convert to a dance bar. Mt Everest Momo Shop (Slogan: ‘Dumplings Without Oxygen’) may have to rename itself Mt Ghyachungkang Momochas Pvt Ltd. Everest Corrugated Zinc Sheets can no longer have the tagline ‘The Roof of the World’. Mt Everest Brand Rubber Flipflops will have to change its motto (‘Be the First To Summit in Our Chappals’). Good thing Everest Herald folded, otherwise it would have to be renamed Ex-Everest Herald. And Nepal Tourism Board will have to destroy all its new posters depicting the mountain, and print new ones with the slogan: ‘Nepal, The Land of Everest, We Were Great Once’.

I don’t know about you but, this matter of Mt Everest being knocked off its pedestal is giving me sleepless nights. On a matter as serious as this, the whole nation should be having sleepless nights. Wake up, yes, you there in the driver’s seat. It is an unthinkable, nightmarish scenario. And what I want to know is why GONe had to be such a smart ass and just before elections announce this geodesic survey that could be potentially disastrous for our national morale. As if we didn’t have enough problems already.

It is therefore in our national interest to come up with a cunning plan to sabotage the expedition and ensure that Qomolungma (which in Tibetan means ‘Goddess Mother of the Earth’) and Sagarmatha (which in Nepali means ‘The Pointy One Behind the White One with the Flat Top That Is Third from Right If You Are Looking Counter-clockwise’) remains the tallest mountain in the world and within Nepali territory. And for that the Bureau of Standards and Metrology should forthwith:

1. Make it mandatory for every expedition climbing Mt Everest from next spring onwards to require members of the summit team (including Sherpas) to carry at least 10kg of rocks to deposit at the top. If we do that, according to my back-of-the-envelope calculation, we can restore 3m to Mt Everest in the next fiscal year.

2. All Cleanup Expeditions that used to bring trash back from the South Col and dump it on the banks of the Bagmati, will henceforth be required to take it on to the summit and deposit it there instead. Given the amount of garbage lying about, the goal of raising Mt Everest to 9,000m in the current Five Year Plan is attainable.

3. Tectonic plates are like a see-saw, you press one side down and the other side goes up. By moving all 29 million Nepalis to the vicinity of Jaleswor, we can make the entire country tilt, thus pushing Mt Everest up by at least 10m.

4. If all these ideas are too much trouble, let’s just bribe the Survey Committee to cook the book.