Ass
According to a recent news report, 2,636 Nepalis have registered with the US National Aeronautics and Space Administration (NASA) for a flight to Mars under its InSight mission that will blast off in May next year on a 728-day trip. Based on proportion of a country’s population, Nepalis come out right on top in terms of our enthusiasm for inter-planetary travel. We understand from NASA sources that some of the lucky ones already have boarding passes. (Everything up to here is the tooth, the whole tooth and nothing but the tooth, and if you don’t believe me I have scanned the said news item, below).

Nepalis have been migrating to neighbouring countries for centuries, and there isn’t a place in the world today where there aren’t people from Nepal. Now that there isn’t anywhere else to go on Earth, Nepalis seem keen to travel to the far reaches of the solar sysem. Not surprisingly, more women are interested in Mars because they read somewhere that men are from there. Already, some of them are practicing walking around in an alien environment, and have chosen the cement factory quarry in Chobhar. With its rocky landscape and toxic air quality it most accurately resembles the terrain, as well as the atmosphere, on the Maritan surface. 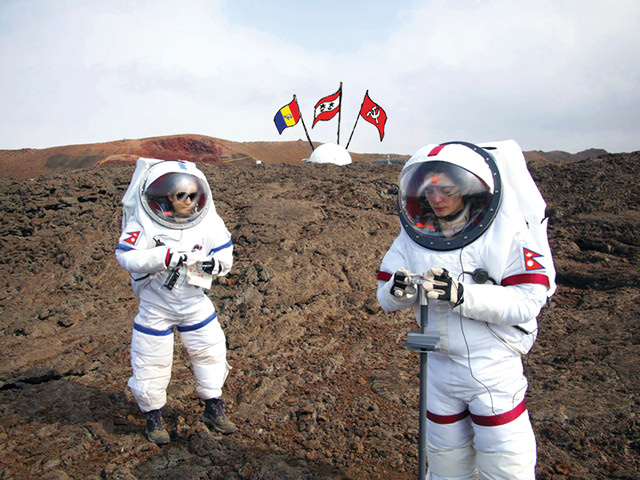 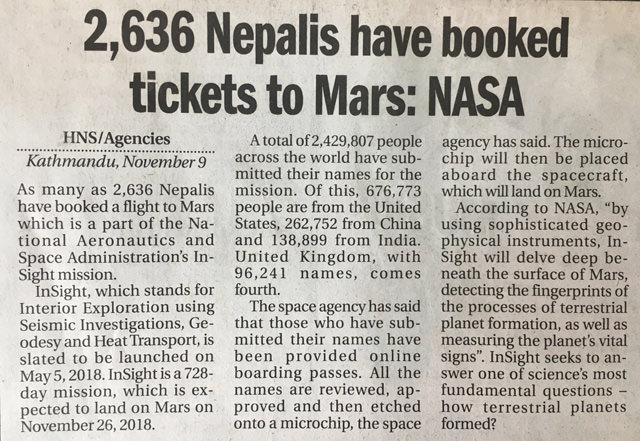 Since they are in the habit of grabbing every junket that comes their way, some politicians and civil servants have also signed up for Mars, and the space cadets from Singha Darbar have been enquiring about their TA-DA. Which is all well and good because as a country that has never been under any foreign yolk in recent human history, we can’t afford to be left behind in the space race to colonise the Near Planets.

Being a very adaptable people, Nepalis will feel perfectly at home on the surface of Mars since the texture and thickness of the dust will be so similar to the dust at the Satdobato Intersection. Although there are signs that Mars once had water, there isn’t any left – just like in Kathmandu Valley. The Martian atmosphere is made up of 96% carbon dioxide and carbon monoxide, with very little oxygen, and most residents of Kathmandu are already breathing that.

The second order of business as Nepalis land on the Red Planet is to set up a local chapter of the Nepal Communist Party (Revolting) which can immediately explore ass-tronomical kickbacks on lucrative construction contracts under BOOT schemes. The possibilities are endless: shopping malls with multiplexes, medical colleges and fully-licensed Mars Bars.

In our immediate vicinity, China has launched Great Leap Forward rockets into orbit, putting the first ever card-carrying member of the Communistic Party into orbit, completely bypassing the aerospace industry tradition of sending a hamster up first. The next step will be to launch an Even Greater Leap Forward rocket, so that Discredited Generals can attain escape velocity.

Not to be outdone, India has announced its own manned moon probe, which is facing delays because its first batch of lunatic trainees are stuck in Delhi due to smog. Ancient astrological formulae may have to be recalculated since the Indian moon landing may ever so imperceptibly send the moon’s orbit around the Earth off kilter, and make us all go slightly bonkers in our part of the world.

With such technological leaps and bounds, there is real danger that we in Nepal are going to be left behind. It is time we also went boldly forth where no Nepali has been before, and in this we have a head start, since parts of Nepal are so high they already stick out into space. As a nation, we also have a great deal of experience in wandering around aimlessly, and once even had a domestic airline called Cosmic Air.

It is great news that Nepalis will soon be traversing the treacherous Ass-teroid Belt to liberate the Red Planet from the forces of global imperialism and claim it for the glory of the revolution.

A trickle of hope on the Bagtnati

With two projects working side-by-side, i may not be long before clean water flows in the Bagmati at Pashupati.
MUKUL HUMAGAIN

Down and out down under

No water in the royal bath

No water pours from the fountain now, but when it did it was hot and perfumed, suitable for a monarch's pleasure.
DESMOND DOIG

16 April | 6.30 PM NST
Wow! It namely likewise fine treatise about JavaScript, babyliss pro curler I dissimilar Your post doesn't acquaint any sense. ray ban outlet uk if information are defined surrounded sketches one can effortlessly be versed with these. hollister sale I think a visualized exhibit can be better subsequently simply a effortless text, chanel espadrilles for sale that why it gives you improved quality. getnjloan.com Can you amuse forward me the code for this script alternatively interest distinguish me surrounded detail among relation apt this script? Vivienne Westwood online get a babyliss perfect curl Very soon this network sheet longing be outstanding among all blog viewers, isabel marant sneakers saleI too prefer Flash,