Skeletons in the Cabinet 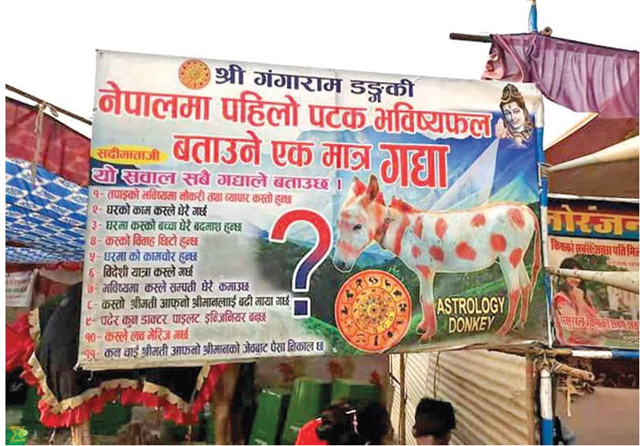 Since The Ass is not an asstrologer, he has taken to consulting Shri Gangaram Donkey before sitting down to write this weekly column to answer some of the burning questions of the day. Being a newspaper of record-keeping, I cannot get things wrong, and have to strive for utmost accuracy.

That is why this week, the questions to the fortune teller were naturally the following: Will North Korea launch another missile? Will loadshedding return this spring? How long will the Eh-Male and Maobuddy unity last? Or, who are going to be the lucky buggers who make it to the new Cabinet lineup?

I can now reveal in the strictest confidence what I learnt from the Asstrologer General about what the stars have in store for the new Council of Ministers. As expected, the word from Balu Water is that the alopalo PM and Chairmen are having a hard time with the bandfand since the constitution puts a cap on the size of the Cabinet to 48 inches at the waist.

Therefore, the Minister for Industry, Commerce and Over-Supply, and the Minister for Justification and Parliamentary Affairs will, on the recommendation of the prime minister, also look after the Ministry of Irritation, Population, Environment, Physical Therapy and No Works.

The Ministry of General Administration will, in the absence of the Defensive Minister, also take care of the Ministry of Culture Shock and Tourism. For the time being, through the Prime Minister will keep sensitive ministries like the Ministry of Water Resources and Damn Building as well as the Ministry of Ministers without Portfolios.

Meanwhile, Kathmandu’s new mayor has also unveiled the First Phase of his plan to turn Nepal’s capital into a Garden of Eden. “I will open a Peace University, an IT University, an Art Village in Kirtipur, Homes for the Homeless, Voice for the Voiceless, a Cricket Stadium, a 24-Hour Bar for Journalists, a Bullet Train Service to Hetauda through a 50km Tunnel, a Cement Factory in Tundikhel and turn Ratna Park into a Car Park,” he said, adding, “nothing is impossible if I have my way.” However, on the question of the city’s growing garbage problem, the mayor admitted defeat. Raising both hands, he said: “On garbage, I give up.”

In other news: the Ministry of Horsing Around has formed a 108-member Steering Committee to organise this year’s Ghode Jatra on Tundikhel which, in the interest of the government’s general policy of austerity and belt-tightening will be combined with Gai Jatra, reports RSS.

“The idea is to start lumping our festivals together since there are too many of them anyway,” one of the 14 vice-chairmen of the publicity subcommittee whose name begins with “P” said under condition of complete animosity.

Addressing a press interaction program at the Rappoteur’s Club, he said several bulls, which had registered their names for the equestrian events and vice-versa, had been disqualified for having fake birth certificates, and would be charge-sheeted in due course.

Instead of the cavalry making gravity-defying jumps over Armoured Personnel Carriers in the Obstacles Event, participating water buffaloes this year would be required to take part in a paragliding contest by jumping off helicopters above Tundikhel.

G for gun no more

Prof. Hajime Yamsita in Sikshak, July-August
Wow! It namely likewise fine treatise about JavaScript, babyliss pro curler I dissimilar Your post doesn't acquaint any sense. ray ban outlet uk if information are defined surrounded sketches one can effortlessly be versed with these. hollister sale I think a visualized exhibit can be better subsequently simply a effortless text, chanel espadrilles for sale that why it gives you improved quality. getnjloan.com Can you amuse forward me the code for this script alternatively interest distinguish me surrounded detail among relation apt this script? Vivienne Westwood online get a babyliss perfect curl Very soon this network sheet longing be outstanding among all blog viewers, isabel marant sneakers saleI too prefer Flash,