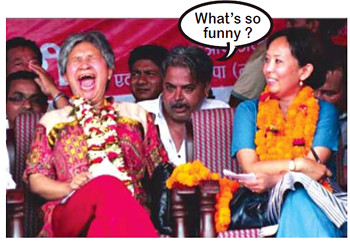 THE HIMALAYAN TIMES
For a guy who once threatened to invade India, the sight of the Awesome One groveling and apologising in Delhi was a sight to behold. Indian babudom and media couldn’t get enough of Lotus Flower when he visited Delhi in 2008, they hung to his every word and poured adulation upon him. Tables turned and PKD became persona-non-grateful. It has taken four long years for the Chairman’s roar to become a meow. Still, Comprador Dahal declared himself a great success at ping pong diplomacy.

Soon after landing in Delhi, Pushpa Kamal Dalal called on the BJP leadership and assured them that although he is a devout atheist, he admires all the gods of the Hindu pantheon and that Nepal would remain a Hindu state. Wot? Then in a meeting, where aides were on the sides taking notes, he assured counterparts that he had made a huge mistake by thumbing his nose at India. He now realised that it was impossible to move ahead without taking Bharat into confidence. Give the guy credit for spitting it out, but what kind of national leader says that to the rulers of another country even if it is true? And whenever the subject of attacks on Indian businesses, obstruction to hydro projects came up, PKD passed on all the blame to Kiran Guru.

Remember Comrade Bagman, the chap who was taped in flagrante asking a contractor on the phone for 500 million to buy members of the CA and Lainchour leaked the conversation to the media? Well, guess who goes to Dilli with Pro-Chandra and sits in all the meetings? Brave Krishna himself. What kind of handle do his handlers have on him, we wonder. The Chairman dresses well and has a weakness for expensive watches, but someone should give Comrade Sita wardrobe advice. OK, we don’t have a national dress for women (even for men, for that matter) but what’s with that lurid kurta?

Everyone knows by now that Awesome deserves an Oscar or two for his ability to look at you straight in the eye, smile, and lie right through his teeth. This enviable ability to tell his interlocutors what they want to hear buys the Chairman time because there are plenty of naïve firanghis who believe him, but sooner or later the lies are bound to catch up.

The reason PKD impressed folks in Beijing and Delhi is not because of his charisma, but the lack of anyone else in Nepal with that quality. Apparently Jhusil has been invited by both North and South, but has refused to go because he just doesn’t trust himself not to give it all away. Besides, they won’t understand a word he is saying. Our neighbours seem to have exchanged notes and decided that there isn’t anyone else who can hold it all together. That message got thru to the Chairman, who was rather chuffed to declare himself the “pillar of national unity to replace the monarchy”.

Jhusil Da should sack his travel agent who couldn’t even get him a ticket to Nepalganj on Buddha or Yeti because the flights were packed. The least his office could have done was bump off someone with a confirmed ticket, if they couldn’t (like the Baddies) charter their own plane. So Jhusil accepted Awesome’s offer to hitch a ride on his Jetstream. The Kangresis better get someone else to lead their party because at this rate Jhusil Da may just absent-mindedly address a Maoist election rally.

So the Department of Detours has decided to take maximum advantage of the publicity generated by the highest ever fistfight in the world history by making Nepal the venue for gangland style mobster tourism. Since Nepal is already a major trafficking hub, MICE could get a boost by enticing the Yakuza, Triads, the Dawood Gang, and other kickass badboys to Nepal for their annual strategy sessions. Some suggestions:

**Sagarmatha Summer Slam (Open Mt Everest beyond 31 May for human traffickers, money launderers, and contract killers, and let them have it out on the South Col)