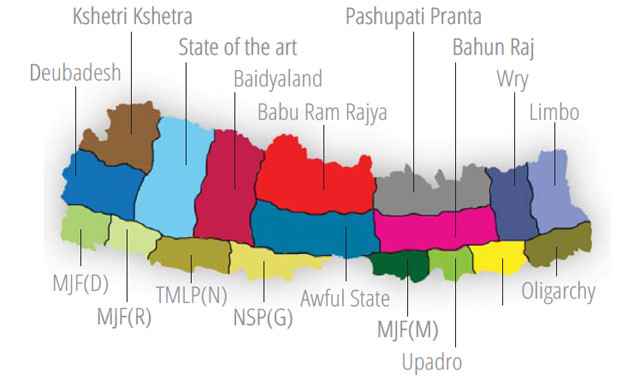 Now that we have elections out of the way, and the wheat has been separated from the chaff, the nation’s attention has turned to the subject everyone has avoided so far: federal provinces, their names and boundaries, as well as the governors and chief ministers thereof.

So far we have said we will cross that bridge when we come to it, but we cannot keep putting it off. Sooner or later, we have to bite the bullet, take the bull by the horns, and cross the Rubicon.

No political discussion in Nepal these days is complete unless you have uttered the ‘F’ word. When talk around the family dining table turns to federal provinces, as it often does, minors have to be sent to bed early because parents punctuate their sentences with “WTF” (What the Federation!)

To avoid coming to blows, the political leadership in its infinite wisdom decided to name federal provinces after single digits. However, there is again talk of adding provinces and changing their boundaries, and in the interest of pragmatism and flexibility, we propose to revive the following map with names that should satisfy everyone: After that we will have to decide on where the capitals of these provinces will be. There is already a battle royal brewing in Province 7 about whether to locate the HQ in the hills or plains. Since neither side is giving an inch, the only solution we can think of is making Dadeldhura the summer capital and Dhangadi the winter capital.

Province 3 is also seeing a tussle between Patan and Hetauda. The ideal way out is to connect the two with a tunnel, locate the capital underground somewhere equidistant between the two and name the capital Patauda. Similarly, Province 2 may soon go to war over whether its provincial capital should be located in Birganj or Janakpur, and the only compromise the Ass can think of is to temporarily locate it in Darbhanga until a mutually acceptable solution can be found.

Now that the atheists have nearly an absolute majority in the house, the path is open to roll back secularism from the Constitution and turn Newpal back into a god-fearing nation once more. This, of course, is going to open a whole new can of worms in a Pandora’s Box about whether Nepal should be a Succulent Republic or revert back to a Hindu Kingdom.

Since all dispute resolution is about compromise, we can meet midpoint and declare that some of the federal provinces will have the option of declaring themselves Secular Monarchies if they so wish.

The Maoists' dual-track strategy has its limits
PRASHANT JHA

From Germany, with love

A sumptuous celebration of contemporary Nepali architecture
Wow! It namely likewise fine treatise about JavaScript, babyliss pro curler I dissimilar Your post doesn't acquaint any sense. ray ban outlet uk if information are defined surrounded sketches one can effortlessly be versed with these. hollister sale I think a visualized exhibit can be better subsequently simply a effortless text, chanel espadrilles for sale that why it gives you improved quality. getnjloan.com Can you amuse forward me the code for this script alternatively interest distinguish me surrounded detail among relation apt this script? Vivienne Westwood online get a babyliss perfect curl Very soon this network sheet longing be outstanding among all blog viewers, isabel marant sneakers saleI too prefer Flash,