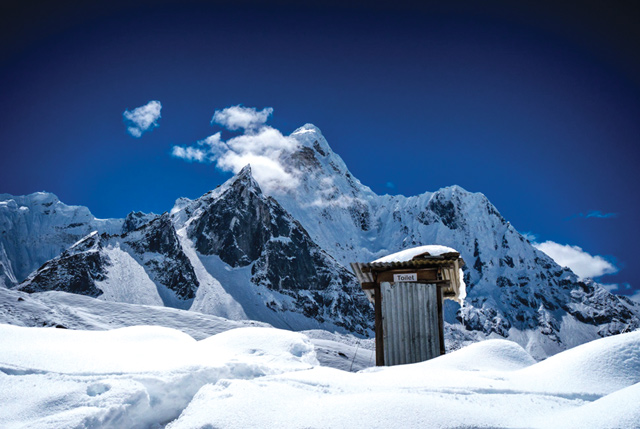 This week’s column contains some flash photography and material that some customers may find disturbing. Read on at your own risk, but keep barf bag handy just in case. Do not drive a car or operate machinery while reading this, and doing so on a smart phone in the loo may not be such a good idea. Management is not responsible for the consequences.    OK, now that we have those legal niceties out of the way we can plunge headlong into this week’s topic. You know a nation is headed for bigger and better things when it starts winning one international contest after another. After knocking out Namibia in cricket and overtaking Bangladesh as the second-most corruptest country in South Asia, Nepal has now beat the crap out of Iceland and the International Space Station for the most scenic toilet in the world according to Gear Patrol.

There was stiff competition out there for sure, but it’s a recognition of our growing self-confidence as a vassal state and a great national honour that this loo in Chukung below Ama Dablam has been recognised by the jury as having a better view than the first runner up, a urinal in Ladakh, and the third-placed pissoire at Singapore Airport Terminal 2. Hip-hip-hurrah! Another crowning glory for Nepal, ladies and gentlemen, a country that had already bagged the Golden Potty Award in the Smelliest Lavatory Category for its winning entry: the latrine at the departure concourse of Gate 2 at the Tribhuvan Unintentional Airport, one whiff of which has been known to cure acute sinusitis in dear and departing passengers.

Now that the entire country is open-defecation free and we have all been adequately toilet trained, it is time to move on to other matters of national importance, viz: Nepal’s trade deficit with India. Did you know, for instance, that since they are downstream from us everything we flush down the toilet here in Nepal ultimately ends up in India? 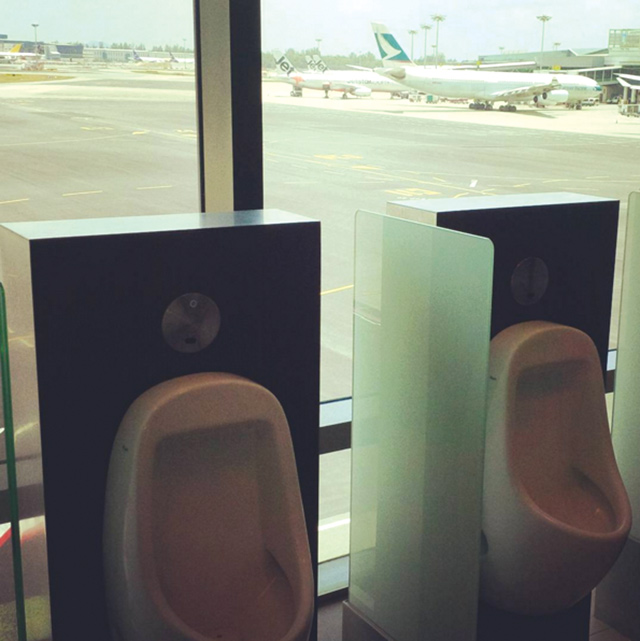 Since time memoriam, we in Nepal have exported to India what we don’t need, and in exchange we import what they don’t eat: water buffalos to feed Kathmandu Valley’s voracious appetite for buff momo. And now that we are all god-fearing secular republicans, we send our holy erstwhile national bovine to clandestinely hoof it across the border at 3AM. We also have a thriving bilateral trade under which we barter our intelligentsia for their intelligence handlers. But more on that in a future column.

Speaking of thriving bilateral trade, it is about to grow exponentially after Laluland banned alcohol from April 1. Already, there has been a huge influx of Bihari Beer Tourists flocking across the border in huge numbers, and proof of this are the cars with Indian number plates driving erratically on the East-West Highway these days. According to our usually unreliable sources, Nepal Police has suspended MaPaSe checks on Indian cars to promote cross-border tourism so that thirsty Indians can combine pilgrimages to Pashupati with bar-hopping in Thamel.

All this can only mean that as tourism income rises, Nepal’s balance of trade with India will now be less skewed. However, to really remove our trade deficit in one swell foop, and even register an export surplus within this fiscal year, we must use our higher moral standing and the force of gravity to reverse the flow on the proposed Raxaul-Amlekhganj Petroleum Pipeline. So, they pump up diesel in the daytime, and we pour down whiskey, vodka and gin in the other direction to Bihar.

The service charge debate concerns labour-legislation as a whole, not just the extra item on your bill.
ARTHA BEED

The once and future king

Urbane, erudite and a good manager, King Gyanendra is not expected to suffer fools.
DUBBY BHAGAT

Nepal is not a substantial contributor to climate change and may not suffer its worst immediate impact, but it could be seriously affected by melting glaciers like Tsho Rolpa.
BIKASH PANDEY

Ujeli came to Kathmandu from Okaldunga, got lost and lived as the "madwoman" of Samakhusi for over two years.
JAN SALTER
Wow! It namely likewise fine treatise about JavaScript, babyliss pro curler I dissimilar Your post doesn't acquaint any sense. ray ban outlet uk if information are defined surrounded sketches one can effortlessly be versed with these. hollister sale I think a visualized exhibit can be better subsequently simply a effortless text, chanel espadrilles for sale that why it gives you improved quality. getnjloan.com Can you amuse forward me the code for this script alternatively interest distinguish me surrounded detail among relation apt this script? Vivienne Westwood online get a babyliss perfect curl Very soon this network sheet longing be outstanding among all blog viewers, isabel marant sneakers saleI too prefer Flash,