The Ass gives some useful talking points to the Prime Minister on what he should take up with Modi Sir. 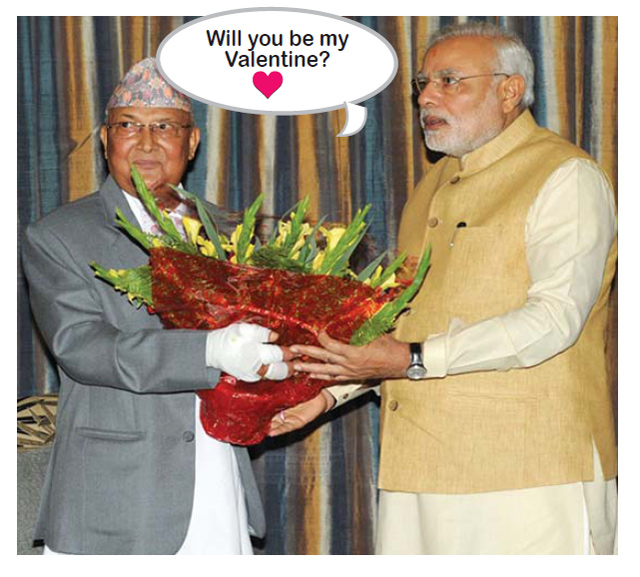 I agree with those who are lambasting Prime Minister Oli for taking a 92-member delegation to New Delhi. The size of his entourage is an outrage. It should be much bigger.

After all, the more the merrier and there is strength in numbers. If we are trying to have a show of force, then this scraggly team is not going to impress anyone in Delhi. The PMO should have taken along everyone in government who needed a medical checkup, or needed to have their heads examined, or both.

But hope is at hand. Under the new constitution amendment all official delegations should be on the basis of population density which means when Madhesi politicians are added to the entourage, it will cross 200. The Nepali invasion of India on Friday, therefore, will not be called a ‘jumbo delegation’, but an Airbus 380 delegation.

Full disclosure: the Ass is angry because yours truly was left out of an entourage that is made up of so many illustrious asses from all sectors of Nepal’s national firmament. If other donkeys can go, why can’t me?

Yes, you by the window, louder I can’t hear you. It should be ‘why can’t I’, not ‘why can’t me’? OK, wiseguy, it’s because of nitpickers like you that this country isn’t moving ahead. Here we are trying to discuss a matter of great national importance that will have far-reaching repercussions and concussions into the future viz, and to wit, PM Oli’s visit to New Delhi, and you want to quibble about grammar and syntax?

Sorry for that rude interruption from a member of the audience, ladies and gentlemen, we can now get back to this week’s subject which is gravity waves from colliding black holes and how it affects Nepal’s Tenth Five Year Plan. Um … wrong page again.

We cannot stress enough how important the timing is for the epic meeting between Oli and Modi this weekend. After all, he is meeting the guy who till just a week ago was trying to throttle our collective windpipes. Just as well he stopped trying to strangle us because we would have breathed our last as a nation state if he had kept it up a while longer. I don’t believe it was India’s intention to actually send us to kingdom come, but they do seem to want the monarchy back.

It is important for Oli to go and pay his respects to the Delhi Durbar and thank the Bad Shah for giving us the opportunity to be his punching bag, and allowing us the chance to help him let off some steam. We should also quote him some Shakespeare: “O mighty Caesar! dost thou lie so low? Are all thy conquests, glories, triumphs, spoils, Shrunk to this little measure?”

Before his trip, the Prime Minister has been seeking advice of all and sundry, mostly sundry, about what he should take up with Modi Sir. Unfortunately the Ass wasn’t invited to provide suggestions, but in the longterm national interest, I am offering him some useful talking points:

Indians lose it over toothpaste and flashlights.
ARTHA BEED

A new generation of Nepali readers, writers and illustrators are prodding publishers.
SALIL SUBEDHI
Wow! It namely likewise fine treatise about JavaScript, babyliss pro curler I dissimilar Your post doesn't acquaint any sense. ray ban outlet uk if information are defined surrounded sketches one can effortlessly be versed with these. hollister sale I think a visualized exhibit can be better subsequently simply a effortless text, chanel espadrilles for sale that why it gives you improved quality. getnjloan.com Can you amuse forward me the code for this script alternatively interest distinguish me surrounded detail among relation apt this script? Vivienne Westwood online get a babyliss perfect curl Very soon this network sheet longing be outstanding among all blog viewers, isabel marant sneakers saleI too prefer Flash,