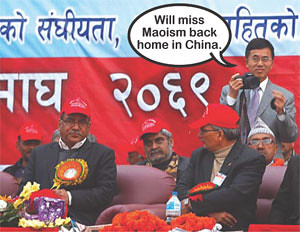 The talk of the town in Hetauda (was it chosen because it rhymes with ‘Hatoda’?) this week was whether the Maoists had indeed turned from a caterpillar to a butterfly, or whether the talk of metamorphosis was to take attention away from war crimes to elections.

Comrade Fierceness, who once sowed terror in the hearts of millions during a revolution that bore his name, was like a mouse that roared. Unlike the last general convention in 1991, this time he excised all mention of ‘American imperialism’, and did not threaten to go to do battle with ‘Indian expansionists’. There was no mention of the ‘Tunnel War’ he declared on India in 2004 in which every school was asked to dig a trench to thwart an imminent Indian invasion. He said the Baddies were now Goodies, and firmly committed to a ‘capitalist democratic revolution’. This great proletarian party may have abandoned the revolution, but it had firmly retained its gift of the gab.

It was a careful balancing act to break the bad news to the cadre that it is no longer a cadre-based party. What a disappointment to erstwhile killers that you can’t go around anymore bumping off people you don’t like, you can only threaten to bump them off. There were quite a few verbal contortions like these to defend the new oxymoron of non-violent Maoism. He had to gently break it to cardholders that are now part of a ‘civilian party’, but they can still dismantle all the cheques and balances of democracy. The most difficult must have been to tell the YCLs that the party did not believe anymore in violence, intimidation, and extortion. But what took the cake was the proposal to resolve lingering border disputes with India with a referendum in Nepal. Whoa, here is how it is supposed to work: Nepalis will vote in a referendum and overwhelmingly demand that India be nicer to us. That should do the trick.

All this narrowly coincided with word from Indian social media that newly-anointed Crown Prince Rahul is a man who passionately believes in foreign affairs. The last time he was going steady with a Colombian woman, New Delhi’s aptly-named Ministry of External Affairs, which is entrusted with keeping track of the alien liaisons of political scions, vetoed it. Now, rumour has it, Rahul is secretly seeing a Nepali lass and keeping it under the radar for fear that the Babus will again pull the plug. But looking at it from Nepal, it’s great news. A future prime minister of India and a future prime minister of Nepal married to each other would open up a new era of Indo-Nepal Friendship and Cooperation. We won’t have to dig trenches anymore. There would never be a diesel shortage, and no load-shedding, too. Also, we wouldn’t have to revise the 1950 Treaty because it would be automatically replaced by a Prenup.

Since the prime minister’s official residence in Balu Water is just over the fence from the residence of the Chief Justice, BRB has apparently been summoning CJ Regmi to climb over the wall and come over for a chat. The mule’s mole at the PMO says the prime minister often probes the Chief Justice on what his reaction would be on various pending cases, including those to do with the president’s ultimatums and war crimes. It was during one of these tête-à-tête that BRB seems to have got a brainwave: why not let the CJ be the PM and stone two birds? To understand the prime minister’s current mindset, one just has to consider the remark he made when cornered in Hetauda on Monday for being an Indian stooge by cadre from the PKD camp: “If we hadn’t been in power, they’d have taken us to The Hague.”

Can’t quite make out when the prime minister is joking, and when he is being serious. When he called his Chairman a ‘neta of netas’ was he stroking the ego of a man he knew to be vain, or poking fun at him? And then in the closed door meeting, he compared Comrade Maximum Leader to ‘Hanuman’, the flying monkey god who set fire to Sri Lanka with his flaming tail.

The French Open revealed these lessons for single players
SUJAY LAMA
Wow! It namely likewise fine treatise about JavaScript, babyliss pro curler I dissimilar Your post doesn't acquaint any sense. ray ban outlet uk if information are defined surrounded sketches one can effortlessly be versed with these. hollister sale I think a visualized exhibit can be better subsequently simply a effortless text, chanel espadrilles for sale that why it gives you improved quality. getnjloan.com Can you amuse forward me the code for this script alternatively interest distinguish me surrounded detail among relation apt this script? Vivienne Westwood online get a babyliss perfect curl Very soon this network sheet longing be outstanding among all blog viewers, isabel marant sneakers saleI too prefer Flash,