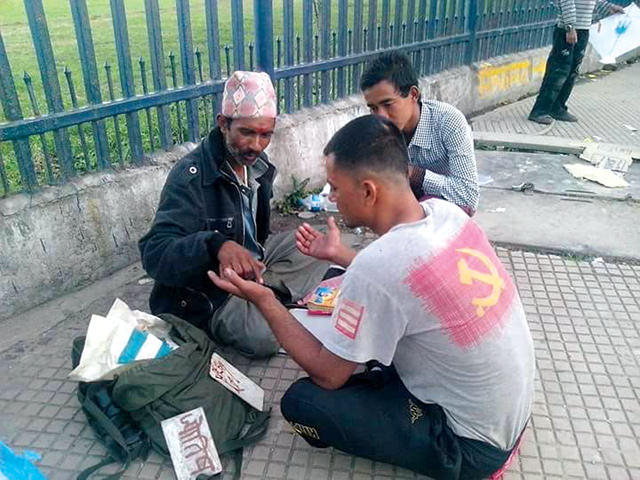 Being the Fifth Column of the Fourth Pillar of the State as well as the mouth organ of democracy, and thanks to new safeguards in the new Constitution to forgive us our press passes, this slightly asinine media person has no qualms this week to devote these column inches to how well things are going in our Fedup Democratic Republic. Yes, today we will delve into how everything is hunky-dory here in the boondocks. (OK, you can now take away that sharp object poking into my backside. Thank you.)

The main national accomplishment this week was that the Erection Commission has done the impossible by successfully setting fire to 15 million already printed ballot papers. This is no mean feat, and much more challenging than printing 30 million new separate ballot papers for FPTP and PR votes. These two distinct ballot papers are now so easy to navigate that even pre-school kids can stamp swastikas on the hammer sickle without looking.

Things are really looking up in this country as we head into elections, and there can be no two opinions about it, although I am aware that some of you may have only one opinion. Which is all right as long as it is the opinion that we peddle. None of us had any inkling about it, but it appears that unbeknownst to many of us presstitutes, this country had been taking great leaps forward. It was such a top secret no one had a clue, including yours truly.

America may be called the land of opportunities, but we seem to be a land of opportunists. Whenever our leaders see an opportunity they employ the Three Other Pillars of the State to grab it. And thank heavens for that, otherwise we’d still be living in an age when there was rule of law.

So, let’s begin with this week’s main achievement which is the good news that Nepal has established diplomatic relations with Eritrea. About time. I know there is always a question that springs to the minds of most Nepalis when they see a news item like that, and the question is: “Where the hell is Eritrea?” The simple answer to that very pertinent and timely general knowledge question is that the government hasn’t told us yet, so we can’t tell you. It’s a closely guarded secret.

As a part of Nepal’s global diplomatic offensive (Official motto: “Let’s be as offensive as possible.”) Nepal has also signed a Non-aggression Pact with São Tomé and Príncipe, which significantly reduces the chances of full-scale war breaking out between us. This will allay fears in many patriotic minds about threats to our national security from the Tomians, if not the Principians, so that we, as Nepalis, can rest even easier than we have been resting so far in the days to come. (Editor’s note to self: Google São Tomé and Príncipe).

Given the number of candidates in forthcoming elections who are convicted criminals, mafia dons, traffickers, tycoons and typhoons, Nepal can now take a leap in the global corruption rankings from 89 to 127. This is not necessarily bad news: it all depends on whether you are counting from the bottom or from the top. Since we have traditionally taken a bottoms-up approach on these matters, this is great news: we can soon overtake São Tomé and Príncipe.

‘We think foreigners are smarter’

The tussles over security sector reform have only just begun
JOHN NARAYAN PARAJULI
Wow! It namely likewise fine treatise about JavaScript, babyliss pro curler I dissimilar Your post doesn't acquaint any sense. ray ban outlet uk if information are defined surrounded sketches one can effortlessly be versed with these. hollister sale I think a visualized exhibit can be better subsequently simply a effortless text, chanel espadrilles for sale that why it gives you improved quality. getnjloan.com Can you amuse forward me the code for this script alternatively interest distinguish me surrounded detail among relation apt this script? Vivienne Westwood online get a babyliss perfect curl Very soon this network sheet longing be outstanding among all blog viewers, isabel marant sneakers saleI too prefer Flash,