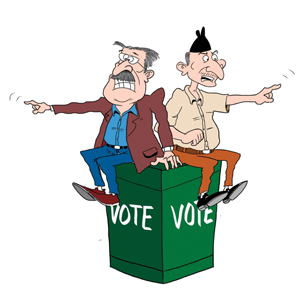 DIWAKAR CHETTRI
Those who say Nepal’s political parties can’t get along are dead wrong. They get along like a house on fire, amicably deciding everything collectively in a spirit of fair play and equal sharing so that no one is left out. In fact, our current four-party dictatorship is a model for egalitarian political cohabitation.

Everything is decided on the basis of distributive justice and band-fand between the parties: road contracts, ambassadorial appointments, promotion of secretaries, and even the winners of the annual film awards. If there is a dispute, it is easily settled in the spirit of compromise. When diplomatic appointments need to be decided urgently before the Election Commissariat’s Code of Conduit deadline kicks in, the Kangresis are given the SAARC Secretary General, the Cash Baddies get Delhi, the UML gets UK, the Madhesis get Thailand. You can tell the relative clout of a political party by seeing who gets to be envoy to Burma or Egypt. Same with police promotions, secretarial appointments, and civil service transfers. And when the budget for a district is unspent, the four parties sit down and divide up the dough among themselves. Every year, three national media awards are doled out by the Ministry of Misinformation. This year the NC, UML, and Cash appointed one candidate each to be the recipients. Works beautifully and everybody gets his share in this superbly functioning and well-oiled system. When power sharing is working so well, why have elections?

Although the gobarment of Chief Minister Kill Raj is supposed to be in charge, it has now become quite apparent that it can’t move even a pinkie without the approval of the High and Mighty Political Commission. And the most powerful commissar in the commission is none other than The Grand Ayatollah Commandante Awesome himself who has a hotline to the Regmi regime with instructions on day-to-day governance matters. That is why Sri Tin Pro-Chandra holds court every morning in Lajimpat and the long line of votaries bearing offerings in return for favours there is much longer than in Balu Water.

With this week’s kerfuffle in the Cash Baddies, PKD has proclaimed himself Supreme Leader so that he is now not just Top Dog, but Only Dog. It is hard to say who won and who lost in the Clash of the Titans. BRB thought he had outsmarted both PKD and NKS by abruptly resigning as vice chairman, whom he described as ‘weeds’ in his speech to the Plenum. But PKD forced his entire top brass to step down and declared himself Great Leader. NKS is now out of the ring, but BRB and PKD are warily circling each other. It ain’t over until the referee counts to 10 and declares a knockdown.

The way the monarchy is back in the news these days, one would think we seriously miss it. The guilty are scared of their own shadow and that is what seems to be happening with political parties vis-a-vis Gyanendra Sir. The ex-kingji has become a convenient stick for political parties to threaten and blackmail each other with. So Baidya Bah, like a jilted suitor, threatens the Cash Baddies that if they don’t pay him more attention he will start dating royalists. This worked: BRB got so jealous he threatened to put KingG behind bars (he didn’t say anything about what he’ll do to Kiran Kaka). The other political parties, which have been doing bugger all about flood victims in western Nepal, sitting on their asses, and twiddling their thumbs, also expressed their grave concern about kingG going around being kind to fellow-Nepalis. Asked one angry neta: “Who gave him the permission to become generous all of a sudden?”

You can be sure the Erection Commission is serious about polls in November because it has become strict about those who flout its Code of Conduct. So while the Higher-than-ever Political Mechanism appoints ambassadors left and right, it has pulled up the ex-princess for handing out rice and sugar to the people of Darchula. Ummm, sir, the Himani Trust is not a political party. Yet.

Editorial in the Rajdhani, 25 June

The communalism virus from across the border is poisoning the tarai.
CK LAL

That would make the final truly exciting.
BILL BREWSTER
Wow! It namely likewise fine treatise about JavaScript, babyliss pro curler I dissimilar Your post doesn't acquaint any sense. ray ban outlet uk if information are defined surrounded sketches one can effortlessly be versed with these. hollister sale I think a visualized exhibit can be better subsequently simply a effortless text, chanel espadrilles for sale that why it gives you improved quality. getnjloan.com Can you amuse forward me the code for this script alternatively interest distinguish me surrounded detail among relation apt this script? Vivienne Westwood online get a babyliss perfect curl Very soon this network sheet longing be outstanding among all blog viewers, isabel marant sneakers saleI too prefer Flash,