Ass first into the monsoon 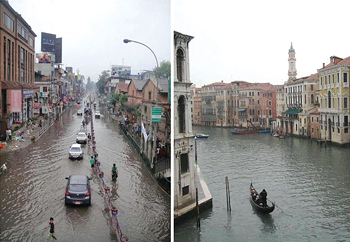 Many of you have been taking the Ass aside at parties in the past weeks to ask when elections will be held. And I have confidently and unequivocally replied: “How the hell should I know? I am an Ass, not an asstrologer.” But if you really want a prognosis on CA elections, then all you have to do is follow the student union elections which have just been postponed infinitely. In fact, college unions in this country have always behaved exactly like their parent parties, which is why when the students grow up they just keep on continuing to burn effigies of each other. No surprise: the First Daughter’s union was involved in padding up the electoral rolls with fake students by mobilising 20 lacks for their admission fees. The other unions cried foul, not because they were outraged but because they didn’t have that kind of moolah. The young turks couldn’t agree on a date for union elections and therefore effectively cancelled it. Which is probably what is going to happen to national elections.

Take it from me: don’t even think about elections until the Maddies unite and form an alliance with the Baddies. That is Awesome’s strategy to ensure a 2/3rd majority to ram through a constitution that will make him an executive president. But the problem is that the Maddies are so divided that they hate each other more than they hate the hillybilly parties. Thakur Sa’b called a meeting to forge unity, but Rajinder (fast-unto-death) Mahato didn’t go because he is trying to be the supreme himself, neither Gutch nor Updaro attended saying, “Just because your father calls us you think we will come?” or words to that effect. Upadro can’t stand Gutch, neither can stand Jupta, and Sarat doesn’t get along with Gutch and no one likes Rajinder. The Hidden Hand must have hands full trying to sort that out.

It must be because we are a backward country that Nepalis are forever striving to be the first in the Guinness Book to be the first to do things backward. Couple of years ago, someone became the first person to try to read the best-selling Nepali epic, Muna Madan, from back to front. This season on Mt Everest, a Nepali mountaineer wanted to enter the Guinness book by being the first person to climb the world’s highest peak ass-first. By the time he got to Camp II the poor fellow had frost-bitten toes and had to be medevaced. And now, a fellow hack wants to travel across Nepal riding a bicycle backwards. Ass’ take: when the country itself is going backwards, why bother?

Many readers from all worldwide nooks and crannies have been writing worried notes to us asking if it is safe and sound to return to Nepal for the summer holidays during the forthcoming monsoon season and if they do, whether they can eat the salad. Because most of the queries have come from highly litigious countries in the western hemisphere, we have consulted our lawyers and now can be brutally frank: no, keep off, leave us alone this monsoon season. We can’t afford to be sued. And, no, don’t touch the salad.

The monsoon gets a bad press, and it is time to rebrand it by extolling its virtues:

1. Your gut reaction will be to stay away because of the prospect of a violent uprising caused by diarrhoea. True, it is not covered by the Warsaw Convention, but diarrhoea is a great way to lose weight. Slogan: Visit Nepal and Lose 10kg in 10 days.

2. The road-widening project has turned the streets into sludge and we can take political mud-slinging to a whole new level in Mudmandu by launching our version of the Glastonbury Festival.

3. Road-widening has also blocked all drains, flooding the city. Rickshaws could be replaced by gondolas and Kathmandu can be promoted as the ‘Venice of the East’.

A wacky, but poignant and fitting, tribute to MJ's life that MJ himself created
A. ANGELO D'SILVA

'Encounter' killings escalate in the Tarai
PRASHANT JHA
Wow! It namely likewise fine treatise about JavaScript, babyliss pro curler I dissimilar Your post doesn't acquaint any sense. ray ban outlet uk if information are defined surrounded sketches one can effortlessly be versed with these. hollister sale I think a visualized exhibit can be better subsequently simply a effortless text, chanel espadrilles for sale that why it gives you improved quality. getnjloan.com Can you amuse forward me the code for this script alternatively interest distinguish me surrounded detail among relation apt this script? Vivienne Westwood online get a babyliss perfect curl Very soon this network sheet longing be outstanding among all blog viewers, isabel marant sneakers saleI too prefer Flash,