The new benchmark for democracy in the days to come will not be procedure, but performance 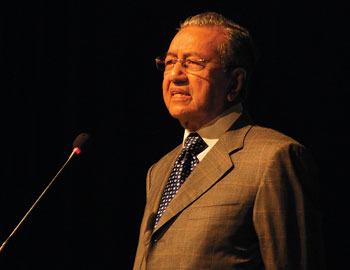 Tales of economic transformation have a certain appeal in Nepal as it reminds us of our own incapacity to make such progress, and we wallow in self-pity about opportunities squandered and years wasted. But perhaps we liked to hear about the Malaysian miracle from its chief architect because of the faint hope that under the right conditions, this country could also be turned around.

Mahathir wasn’t saying anything original this week in Kathmandu. Of course, political stability is imperative for economic development, indeed labour-intensive industries are necessary to create jobs, investing in education is obviously imperative. But is it necessary to curtail democracy, stifle press freedoms, for economic progress? It isn’t an either-or. The Mahathir and Lee Kuan Yew model trades democracy for growth.

Every decade or so, Nepal’s rulers declare that they will turn the country into a Switzerland or a Singapore. These wild proclamations actually reveal a hidden dictatorial streak in our leaders.

The political instability since 1990 and the incompetence of democratic leaders is often blamed for Nepal still being mired in poverty and stagnation. The people therefore vent their frustration at the system of multiparty democracy rather than the leaders who lack accountability. Hence, this yearning for strongman rule. In the new constitution, this viewpoint is represented by the demand for a directly-elected president. But history has shown that executive presidents tend to get addicted to power and turn into dictators rather more frequently than prime ministers in parliamentary systems.

People also speak of the need to transplant the current crop of corrupt and incompetent leaders with a new force even when such a proposition routinely ignores the extent of political evolution that has taken place, and which can form basis for a more mature polity in the future. Baburam Bhattarai has been thinking aloud about such a force, and while it sounds attractive at first, it is exactly the sort of argument demagogues have often used to reverse democratic gains while consolidating their own power.

We have walked down that path twice in recent history and realised too late that exchanging democratic ideals for economic development will accord us neither. Let’s not waste time discussing the alternatives to democracy anymore. The new force, if it arises, will have to operate within the democratic framework because it is, after all, the least bad form of government.

We are a country of minorities, straddled in a geo-politically sensitive region and democracy, however messy, is the best and perhaps the only hope for us. This is the lesson that we need to be constantly reminding ourselves of, as the world changes to accommodate dictatorships, hybrid regimes and pseudo democracies. With the emergence of China and the examples of Singapore, Malaysia and Vietnam, it has become easier for the Rajapakshes in the region to claim legitimacy on the fringes of democracy.

There have been suggestions that poor countries with weak state capacities are more at risk of conflict and escalation after they achieve democracy. In which case, leaving young democracies vulnerable to external interventions and without internal strengthening is a dangerous idea. Nepal’s big neighbours say they both want stability in Nepal. They should know by now that a stable, democratic and left-alone Nepal is the best guarantor of their interests. Supporting anti-government elements, playing divide-and-rule and undermining an emerging democracy would ultimately harm their own national interests.

If Nepal’s leaders were listening to Mahathir closely, they would have heard him also say that leaders must have the national interest at heart, and not their personal gain. The new benchmark for democracy in the days to come will not be procedure, but performance.

Instability cannot be an excuse for non-performance anymore and if we continue on this path there will be no progress, and no democracy to protect either. We are not at war anymore and those who waged it have run out of excuses.

The roots of democracy

Indigenous groups in Nepal are teaching their communities
HEMLATA RAI

Flags and national dress will be bits of mouldy thread in some archaeologists sieve one day.
DANIEL LAK
Wow! It namely likewise fine treatise about JavaScript, babyliss pro curler I dissimilar Your post doesn't acquaint any sense. ray ban outlet uk if information are defined surrounded sketches one can effortlessly be versed with these. hollister sale I think a visualized exhibit can be better subsequently simply a effortless text, chanel espadrilles for sale that why it gives you improved quality. getnjloan.com Can you amuse forward me the code for this script alternatively interest distinguish me surrounded detail among relation apt this script? Vivienne Westwood online get a babyliss perfect curl Very soon this network sheet longing be outstanding among all blog viewers, isabel marant sneakers saleI too prefer Flash,