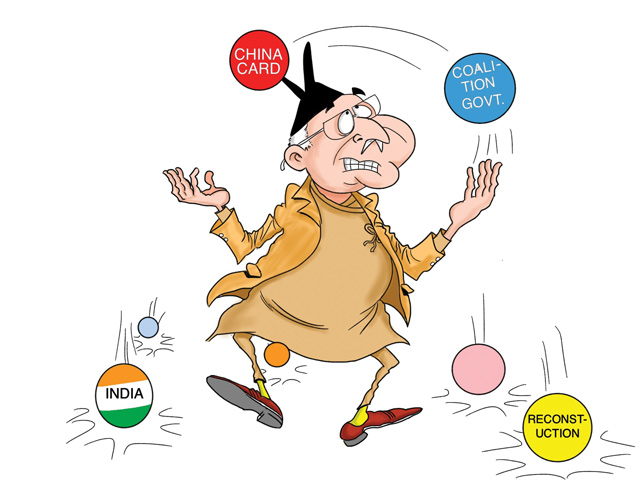 Nepalis do not need an anniversary to remind them of what has been a recurring nightmare. A year after the earthquake and billions of dollars promised for rebuilding, 2.5 million people are still living in temporary homes.

People have lost their loved ones, their livelihoods, livestock and homes. They have little hope that things will improve. Every second matters, yet our political parties took nine months just to appoint a CEO to the National Reconstruction Authority (NRA). It did not matter to them that earthquake survivors were wet, cold and hungry while they were wrangling over the NRA seat.

This lack of seriousness, an absolute disregard for the people’s welfare and the shocking confidence that they are indispensable makes one wonder what we Nepalis  ever did to deserve politicians like these.

Our tragedy is not that we live in one of the most perilous and disaster-prone parts of the world, but that we have inherited a political class that is capable of keeping this country in a perpetual state of ruin as long as they can benefit from it. With two big earthquakes and an even more damaging Indian blockade, the year 2072 was not a very good one. But has any year been better? How long are we condemned to live like this? At this pace of reconstruction, whatever is still standing will be destroyed in the next Big One, which is inevitable.

Now that the blockade is over, there shouldn’t be fuel lines and gas cylinders should be plentiful and sold at normal prices, right? Wrong. We should be catching up with delayed infrastructure projects, but they are in limbo. With things returning to normal, there should have been a semblance of governance by now.

What has stopped the government from amending discriminatory citizenship provisions in the constitution to give equal rights to Nepali women? What has stopped it from eliminating fear, doubt and misinformation that has been spread among Madhesis about the new constitution? How long will our leaders keep on pointing at external threats to hide their incompetence, and how long will people buy their lies?  It took an Indian blockade to wake some of our leaders from their slumber and sign a transit treaty with China. What will prompt them to pursue Nepal’s interests beyond mere survival for the greater wellbeing of their people?

The way things are going, the international community is eager to write off Nepal as a failed state, and it is hard not to notice an alliance forming that wants to discredit and delegitimise the Nepali nation. If our parties do not get their act together, there are more difficult days ahead. For all their talk of humanitarian support and accountability, the international community was hardly to be seen during the difficult months when Nepal was being blockaded by India. Their disdain and criticism of the Nepali state, does little to mask their own selective application of principles of human rights and democracy. It seemed as if they had no qualms watching millions of Nepalis suffer if that’s what it took to teach Katmandu a lesson.

Despite knowing full well that India blockading Nepal immediately after the earthquakes would lead to a humanitarian crisis, the international community kept its mouth shut for fear of hurting India’s feelings. There are now claims from different quarters that Nepal is facing grave existential threat owing to the Madhes unrest, but by failing to support Nepal when it was most needed, the international community has proven once and for all that it is not a neutral partner. Nepalis are trapped between corrupt and incompetent political forces within, and external powers without. Both are working to advance their self-interest at the cost of the ordinary people of Nepal.

Understandably, there is an air of cynicism and collective despair, but survivors of the earthquake and those reeling under food shortages caused by a prolonged drought in western Nepal, continue to do the best they can to survive day-to-day.

Much to the disappointment of blockade imposers, Nepal did not come tumbling down in those five months last year. And perhaps Nepal will continue to survive despite the doomsayers because of the fortitude and wisdom of its hardy people.

From JNU to Kathmandu

Baburam Bhattarai: "We were too ambitious…while India underestimated our strength."
JYOTI MALHOTRA

Prime Minister Bhattarai may soon have a lot less to smile about
DEWAN RAI
Wow! It namely likewise fine treatise about JavaScript, babyliss pro curler I dissimilar Your post doesn't acquaint any sense. ray ban outlet uk if information are defined surrounded sketches one can effortlessly be versed with these. hollister sale I think a visualized exhibit can be better subsequently simply a effortless text, chanel espadrilles for sale that why it gives you improved quality. getnjloan.com Can you amuse forward me the code for this script alternatively interest distinguish me surrounded detail among relation apt this script? Vivienne Westwood online get a babyliss perfect curl Very soon this network sheet longing be outstanding among all blog viewers, isabel marant sneakers saleI too prefer Flash,