Was that for real?

Whatever the reason for the deal on the constitution, at least we have a deal 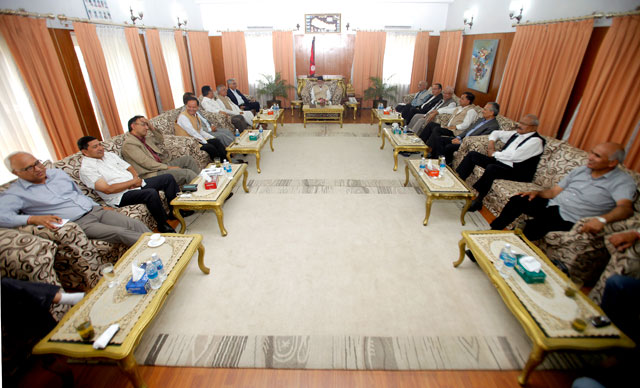 The post-earthquake reconstruction challenges and ensuring the new constitution by consensus are reasons offered by the engineers of the 16-point agreement signed on Monday night to pave the way for a new government by top leaders of the four political parties.

But the real motive was power and how to divvy it up. Behind the new bonhomie between major ruling and principal opposition parties was that everyone got to benefit from the deal.

Parties left out of this power-sharing setup would cry hoarse about betrayal, and that is exactly what happened. Power-sharing and electoral politics have several names in Nepal, one of which is: identity politics. We might likely see more drama on that front.

However, in public and among many observers there was a sense of relief. Unless there is some unexpected turn of events (which can’t be ruled out if the past is any guide) the party leaders are finally about to deliver on the long-promised statute. We might get a new constitution by mid-July, the new deadline set by the leaders. This is certainly a cause for cheer and relief but it also invites questions.

First and foremost: federalism. The top leaders of political parties have clearly tried to buy more time but by doing so have tried to take an easy way out. This could have been an excellent opportunity to decide on state restructuring by giving a deserved burial to politics of ethnicity which was rejected by a majority of people in the hills, plains and mountains including in the Madhesi and Janajati strongholds.

By leaving the issue of state demarcation and naming of new provinces for the future, the parties have kept alive the prospect of discord and division which may even impact on the delivery of the delayed constitution. We have seen in the past how forces within and outside the country ganged up against the promulgation of the constitution under various pretexts.

The speed at which the developments of the last few days have unfolded is quite breathtaking. The interests of the Prime Minister and NC President Sushil Koirala, Chairman of UML K P Oli, Chief of UCPN (M) Pushpa Kamal Dahal and the Chairman of Madhesi Janadhikar Forum (L) Bijay Kumar Gachchadar have converged for the current ‘breakthrough’.

Koirala gets to be a part of history, the leader under whose watch the constitution was delivered by an elected assembly. Oli gets to be the new PM, Dahal gets his share of credit for breaking the deadlock on the statute, and a realistic shot at being the next President of the republic. Gachchadar would get at least one plum portfolio in the new government, claim to have played a key role and hope to reap dividends during the next few elections.

Upendra Yadav and Mahant Thakur might see more gain in trashing the new understanding on federalism and the constitution, keep playing regional politics and stoking the flame of ethnicity with some Janajati groups. But with the wider acceptability for the 8 June agreement meaning more parties jump the sinking 30-party ship, they may be sidelined. These has-been politicians are pushing an agenda rejected in the November 2013 election.

The other important question to ponder is about the composition of the new government once the constitution is promulgated. If Monday night’s exercise is any indication, we will be seeing a coalition government comprising at least four of the top five parties in the CA-cum-Legislature/Parliament besides a host of smaller ones. The fourth party by strength, RPP-Nepal led by Kamal Thapa, is the obvious odd man out.

This is a very bad precedent. Opposition parties jockeying to get a share of the pie out of the billions dollar reconstruction aid are failing the people affected by the earthquake. Without a strong and critical opposition, the reconstruction effort will be plagued by corruption, favouritism and inefficiency.

The political parties have still not learned lessons offered so clearly by the mismanagement of the rescue, relief and rehabilitation immediately after the first quake of 25 April and the major aftershock on 12 May. The absence of locally accountable elected representatives would have ensured a much faster and better delivery of relief materials.

But from cynical commentators and useful idiots, we still hear arguments that local body elections are against federalism.

"Main conflict is between totalitarian and democratic forces"

But the bottom line is in the appreciation
RABI THAPA

UP, UP and AWAY

Our cities are down on charm, but kites still channel our spirits
Wow! It namely likewise fine treatise about JavaScript, babyliss pro curler I dissimilar Your post doesn't acquaint any sense. ray ban outlet uk if information are defined surrounded sketches one can effortlessly be versed with these. hollister sale I think a visualized exhibit can be better subsequently simply a effortless text, chanel espadrilles for sale that why it gives you improved quality. getnjloan.com Can you amuse forward me the code for this script alternatively interest distinguish me surrounded detail among relation apt this script? Vivienne Westwood online get a babyliss perfect curl Very soon this network sheet longing be outstanding among all blog viewers, isabel marant sneakers saleI too prefer Flash,