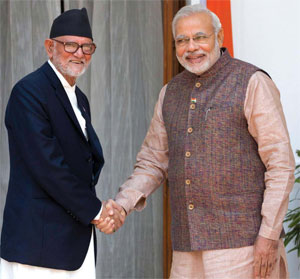 One of the objectives of Indian External Affairs Minister Sushma Swaraj’s visit to  Nepal this week was to demonstrate that the new BJP government in New Delhi is charting a new course in bilateral relations as part of her prime minister’s stated goal of a neighbours-first policy.

That is recognition of widespread concern and public discussion in Nepal’s public sphere of the growing role of Indian intelligence agencies in ‘handling’ politicians, business and media in Nepal. The fact that the actions of a supposedly secretive spy agency is debated so openly is detrimental to both sides.

Therefore, Swaraj’s promise of dealing with Nepal at the highest level has been a welcome change, and the message went down well in Kathmandu. It has laid the groundwork for Indian Prime Minister Narendra Modi’s two-day visit beginning August 3, and in the longer term to explore new  opportunities to improve ties. The expectations of change and euphoria are palpable.

While it is too early to predict just how long-lasting Modi’s initiative will be and how it will be implemented on the ground, it is an opening that Nepalis should grab with both hands. If Nepal wants a gift of a mega-project or India’s magnanimity, what should be our reciprocal gesture? What the Swaraj visit has done is to put the onus on Nepal to make the Modi visit a fruitful one.

It is time for Nepal to walk the talk. Politicians, academics, journalists do not tire of mentioning the special relations that exists between the two countries and peoples. But what is more obvious is the acrimony, distrust and planted stories in the media in both countries. There isn’t a shortage of journalists on both sides willing to do the dirty job of spinning and planting leaks just to have access to the high and mighty.

The result is that India feels betrayed despite doing so much for its northern neighbour and Nepal lives in chronic suspicion of interference and bullying from the south. But what should really concern Nepal is its ballooning trade deficit with India.

According to Nepal Rastra Bank’s 11-month figures ending mid-May for the last fiscal year, for every rupee of export to India, we import 13 rupees worth. By mid-June our imports from India for 2013-2014 stood at NPR 337 billion.

Our petroleum imports from India contribute the most to this deficit and is growing because of the volume of imports as well as prices. So, we continue to sell our USD reserves to buy India currency from India to pay the Indians. One does not have to be an economist to realise what this means.

That is the real challenge before Nepal’s policy-makers and leaders: to find a viable solution to the trade deficit. This can’t be done by hollow anti-Indian nationalism, or slogans. It needs a viable and strategic policy to boost exports.

So far, Nepal has always sought concessions on trade and exports which India has granted, with a few exceptions. True, the arrangement is not free from occasional hurdles from different bodies in India. More demeaning is the fact that our politicians – from all major political parties without exception – try to cut deals that suit their personal ambitions.

The Indian establishment has obliged because it opens Nepal up to do as it pleases here. We have been paying a heavy price for the absence of formal reciprocity, and  short-sightedness of our leaders. Nepal’s waters are flowing into India with neither country using its potential benefits.

Indian intelligence has blatantly transgressed all diplomatic norms in Nepal, and the Indian Embassy distributes aid directly to the districts. The Chinese and the others have not just been following in India’s foot-steps, but are now trying to match it.

Instead of requesting Modi for a gift of mega project, why not enter into an agreement that is in the interest of both countries? Asking India to show magnanimity in investments should not be a precondition. No country would agree to a pact that is not in its national interest. For a federal government in New Delhi, there is the added pressure of keeping in mind the interests of the states bordering Nepal and which may be led by parties other than those ruling in the centre.

The choice for both sides is clear: either continue to be overbearing, do nothing, complain, rabble-rouse, or seize the opportunity.

We sell whitewater rafting and Pashupati in the same package, and wonder why we find no takers.
ARTHA BEED

Get a glimpse of the inroads the 21st century is making in Nepal.
GAURAB RAJ UPADHAYA

"Tourism promotion must not be Kathmandu-centric."

Prem Budathoki in Sanghu, 21 January
Wow! It namely likewise fine treatise about JavaScript, babyliss pro curler I dissimilar Your post doesn't acquaint any sense. ray ban outlet uk if information are defined surrounded sketches one can effortlessly be versed with these. hollister sale I think a visualized exhibit can be better subsequently simply a effortless text, chanel espadrilles for sale that why it gives you improved quality. getnjloan.com Can you amuse forward me the code for this script alternatively interest distinguish me surrounded detail among relation apt this script? Vivienne Westwood online get a babyliss perfect curl Very soon this network sheet longing be outstanding among all blog viewers, isabel marant sneakers saleI too prefer Flash,