Federalism and local elections are not contradictory, they are two sides of the same coin 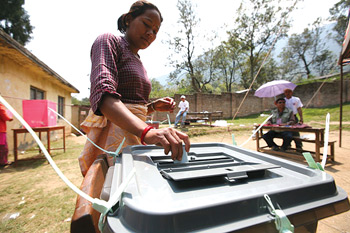 How often have we heard this: “Local election is a conspiracy against a new federal constitution.”? This is stretching the argument, and by a long shot.

It would be a great achievement if the new constitution was promulgated by January 2015 as per the time-table recently announced by the parties. Who knows, they may give us a surprise that is, for once, pleasant.

But given the track record of the political parties, it is plausible that the deadline will be missed. So shall we keep on postponing elections for VDCs, DDCs and municipalities? The first meeting of the new Constituent Assembly was held two months after the election, it took four months to elect a new prime minister, and more weeks to agree on CA regulations after wasting time on needless haggling over who should certify the new constitution.

Now, even if the constitution is written and adopted within a year, the actual federal make-up of the country would take much longer than anticipated. New laws need to be written and ratified for a federalised Nepal. Laws governing provincial governments and their rights and responsibilities, the subjects to be governmened by national and state governments and legislatures, the relation between states, the tax collection structure – these are just a few of the issues that need to be legislated and passed. Given that there is no precedence in Nepal, we will be learning as we go along.

Moreover, the distribution of natural resources could be sensitive and is likely to cause much frustration and anger. Aggrieved communities could take to the courts to resolve disputes, and that would be the best case scenario. Worse, animosities could spill out into violence, adding to the challenge faced by political parties. Then there is the election of state legislatures. It requires laws and a certain time-frame to accomplish these.

So, shall we postpone the local bodies’ election until all of these are finalised? It could take decades. How are local polls against federalism? Lest we forget, all major parties had committed to holding the local election within six months of the CA polls. Their election manifestos and the last point in the 11-point agreement of March 2013 specifically speaks of holding the local bodies’ election by the end of 2070 BS, that is by 13 April this year. The agreement was signed by the UCPN(M), the NC, the UML and the then Madhesi Morcha.

But the parties that fared badly in the election – UCPN(M), Madhes-based parties and the 33 parties led by the CPN-Maoist, which argue that unelected people are better suited to decide important matters of the country than the elected ones, are against holding the local body elections. They call it “a conspiracy against federalism”. Even the NC and the UML that emerged as the largest parties after polls, have not been able to push through this objective.

Sixteen years has passed since the last elections for local bodies and 12 years since they were dissolved. The delivery of even the most basic of services in VDCs and DDCs have been seriously affected, corruption is rife and local development have been hit hard in many places.

And we are being told that there should not be local elections until the country is carved out into federal units. This is a disservice to the people who despite threats and pervading cynicism participated in the November election to demonstrate, yet again, their abiding faith in democracy. The parties need to match the people’s faith in democratic culture. So far, the signs have been dispiriting.

After all, isn’t federalism all about decentralising power, giving local people a bigger say in the affairs of the place they live in and strengthening grass-roots democracy? If one can use the term localising democracy, then this is it. Local bodies guarantee precisely that. So why is local elections against federalism?

Whose home is it anyway? TRISHNA RANA

Back to square zero TRISHNA RANA

King Gyanendra does the Patan walkabout
KUNDA DIXIT
Wow! It namely likewise fine treatise about JavaScript, babyliss pro curler I dissimilar Your post doesn't acquaint any sense. ray ban outlet uk if information are defined surrounded sketches one can effortlessly be versed with these. hollister sale I think a visualized exhibit can be better subsequently simply a effortless text, chanel espadrilles for sale that why it gives you improved quality. getnjloan.com Can you amuse forward me the code for this script alternatively interest distinguish me surrounded detail among relation apt this script? Vivienne Westwood online get a babyliss perfect curl Very soon this network sheet longing be outstanding among all blog viewers, isabel marant sneakers saleI too prefer Flash,