The views parfait, the light magnifique 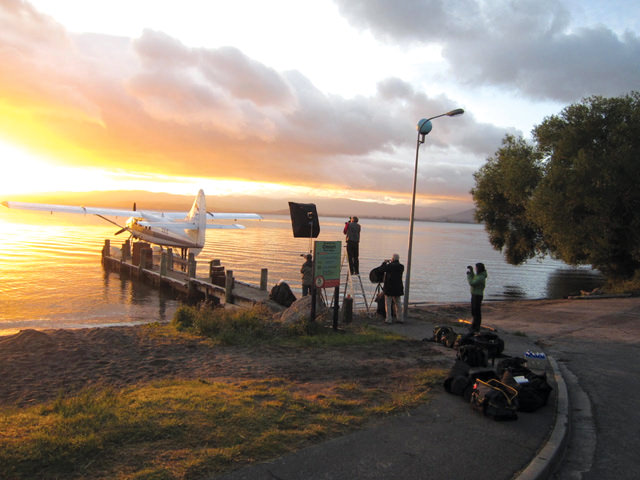 All photos:: Lisa Choegyal
Eric Valli on the ladder, shooting the dawn shot of the float plane at Omori

“There are too many monasteries, prayer flags, temples, yaks and people in Nepal.” The querulous voice on the phone from France sounded personally affronted. “Can’t you find us somewhere that is more just high mountain scenery? Something more generic, mountain landscapes that could be anywhere.”

In the movie business we are used to never saying no, throwing money at problems and facing outrageous demands, but never had the Himalaya been so summarily dismissed. The French production manager needed locations for luxury fashion brand luggage – not living models, but suitcases out of a Paris museum, so precious that they would need their own security guards.

“Of course,” I sighed, masking my irritation. “Let me get back to you.”

Thus it was that a few months later I stood beneath lush grey-green foliage on the northern edge of Lake Wakatipu in New Zealand’s South Island. Its peaty, luminous surface reflected rocky peaks, spiky cabbage trees and a clear blue antipodean sky. Adventure Consultants had agreed to handle the arrangements, and were already regretting it. Caroline, who is more used to managing Everest climbing expeditions, ran her fingers through her long dark hair in frustration. “Why do they keep changing their minds? Why can’t they decide what they need and then stick to it?” 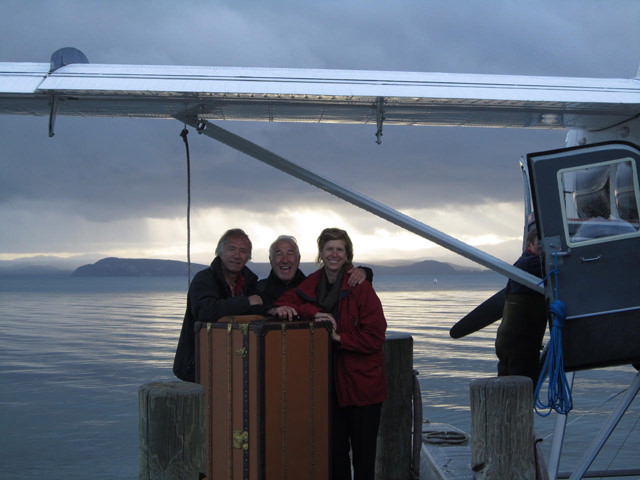 Eric Valli, Cristian and the writer with the luggage and Fred's float plane on Lake Taupo

Based in nearby Queenstown, the French crew helicoptered to sites on remote rivers, lakes and mountaintops — blissfully free of temples and monasteries — supported by movie Kiwis fresh from the set of Lord of the Rings. Whilst my production friend struggled with plans and decisions, Christian the chic Parisian design director delighted in the countryside: “New Zealand is so beautiful, the views parfait, the light magnifique.” Superstar photographer Eric Valli — tall, rumpled and irresistible — beguiled the team with adrenaline-fueled tales of honey hunters and birds’ nest collectors, and adventures filming Himalaya in Dolpo and The Trail in the Namib desert.

I enjoyed working with Eric in New Zealand — his extravagant energy and positive spirit were contagious. He has long shared a special bond with the Himalaya, and my house is decorated with his gifts of Tibetan and Bhutanese textiles from way back. Eric’s two daughters were brought up with my sons, schooling together in Kathmandu and Melbourne. But we had never worked together before as he preferred to keep his projects mysterious and under the radar. With fame came a self-obsession that all of us found trying, including possibly Eric himself. It was a family game over drinks or dinner to count the number of I’s and me’s that he used in every sentence.

The New Zealand photo set-ups were creative and complicated: a 1950s motorbike with sidecar on a grassy highland outcrop, a high snowfield with dogs and a loaded sled, a string of packhorses on a mountain top overlooking the lake, a rustic raft complete with sail and steaming stove, a safari tent beneath fern trees, and an elaborate treehouse deep within a beech forest. 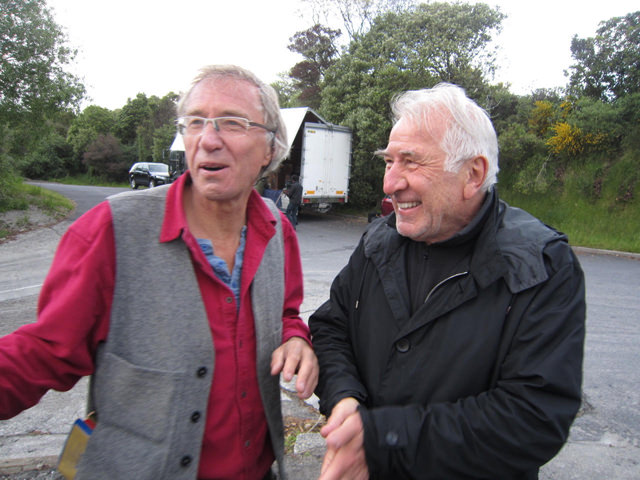 Eric Valli and Cristian celebrating the end of the shoot, with the secure truck for the historic Louis Vuitton luggage parked behind

The precious historic luggage travelled in a secure truck with burly uniformed guards keeping a nervous eye out for rain. Eric Valli worked his magic, Christian continued his rapturous praise of New Zealand’s landscape and Caroline’s team, despite vacillations, variations and against all odds, somehow made it all come together.

I was tasked with finding a location for one last shot — a lake jetty at dawn with distant volcanoes within reach of the antique floatplane that had been found in the centre of New Zealand’s North Island. Permission was sought from the Maori custodians to film on Lake Taupo, Fred flew his floatplane down the valley and across the lake to Omori, and the French crew and New Zealand support team decamped to a rustic trout fishing lodge on the Tongariro River (Eric on ladder, left).

Next morning at a chilly 4am I was driving too fast with Caroline through the dark sleeping village to the landing stage shoot when a grey cat ran out directly under my wheels, killed instantly. Its pale blue collar had a disk with a telephone number that I noted before carefully leaving the limp furry body in the tall grass by the roadside, and hurrying on.

A spectacular golden dawn streaked across the lake, enabling Eric to secure the perfect shot of suitcases piled on the jetty in front of the float plane. But Caroline and I were distracted, saddened by the dead cat and waiting to call its owner at a civilised hour.

After a quick sightseeing spin with Fred above the morning lake and fond farewell hugs, the jubilant French piled into large cars heading to the airport and Paris. The Kiwi team packed up and left exhausted and relieved. Caroline and I drove away slowly, dismayed to see that a large green council truck with a ferocious rotor blade was closely cropping the grass verges in the village.

Jana Astha, 3 December
Wow! It namely likewise fine treatise about JavaScript, babyliss pro curler I dissimilar Your post doesn't acquaint any sense. ray ban outlet uk if information are defined surrounded sketches one can effortlessly be versed with these. hollister sale I think a visualized exhibit can be better subsequently simply a effortless text, chanel espadrilles for sale that why it gives you improved quality. getnjloan.com Can you amuse forward me the code for this script alternatively interest distinguish me surrounded detail among relation apt this script? Vivienne Westwood online get a babyliss perfect curl Very soon this network sheet longing be outstanding among all blog viewers, isabel marant sneakers saleI too prefer Flash,