One day of life in the jungle

Long before the term ecotourism was coined, an initiative in Nepal rooted in conservation and community was hailed as one of Asia’s best 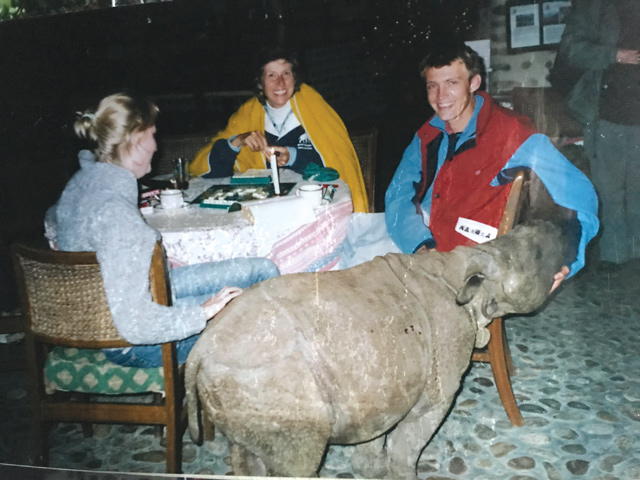 Munghal, the orphan rhino visits the author and Kristjan Edwards in the Lodge dining room.

“Welcome to Tiger Tops. We’ll be leaving on the elephants for a jungle safari once the aircraft has departed, so please wait in the shade.” I greet the guests emerging from the Royal Nepal Airlines aircraft, dazed by the bright April light, and usher them into the simple thatched shelter with wood plank benches that passes as the Meghauli Terminal.

With practised hands the bags are loaded onto the open Land Rover, the prop engines keep spinning for a quick turnaround, and the departing guests leave with thanks and hugs and waves. “What an amazing place, we have so enjoyed our stay!”

A couple of stray dogs and several undernourished cattle are chased off the airstrip, and the flight lifts past us with a brief roar, heading to Kathmandu. Silence settles back on the grass runway. A few locals who had paused to watch the daily spectacle of ‘Big White People’ return to their grazing goats. In faded cotton saris and glinting glass jewellery, two ladies cross the runway with firewood balanced high on their heads. Airport duty is already my favourite, although I had been working at Tiger Tops only for a few months. The daily flight is our sole link with the outside world, and I am first to check the green office mailbag carried down by the pilot, containing details of guests, supplies and news of home. Later, Chitwan is connected with radio, telephones and mobiles, but in 1974 the Kathmandu office managed reservations only with telegrams and telex.

On unlucky days when the flight was cancelled due to weather or aircraft problems, after waiting all day we would return with the guests to the Lodge, guessing at tomorrow’s flight time and logistical rearrangements. Today the guests leave on elephant back and I climb into the baggage vehicle as the driver bangs his door closed. Laughing, the boys perch on the luggage and staff families hitch a ride – a young wife squeezes into a rear corner of the Land Rover with her kohl-eyed baby. 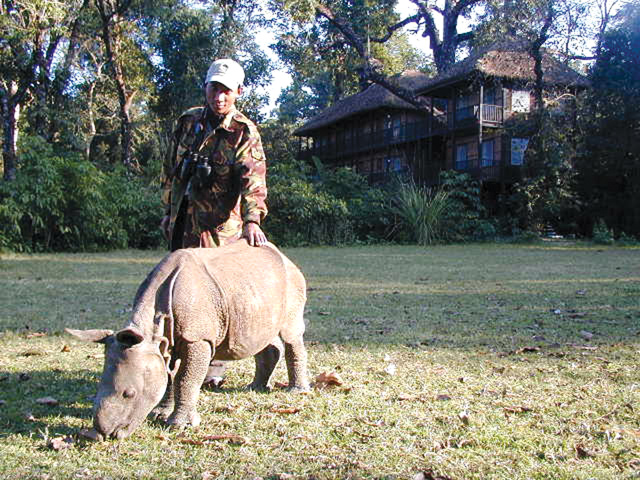 At the height of its success, Tiger Tops’ elephant safaris, nature walks and guided boat trips were an iconic must-see of Nepal tourism, attracting not only regular guests but also celebrities, royalty, movie and rock stars. This was the beginning of nature tourism in Nepal, a responsible tourism initiative rooted in conservation and community, hailed as one of Asia’s best wildlife experiences long before the term ‘ecotourism’ was coined.

I relished the rhythms of jungle life, the complex logistics and the apparently effortless precision timing, which in fact required meticulous planning. The Tiger Tops Chitwan community numbered about 200 people, mostly men, if you included all the elephant camp and the chaps who laboured to pump the water and maintain the roads. Dressed in varying shades of buff and khaki green, we were a self-contained group with lives defined by our jobs: a hierarchy of interlocking relationships. Behind the scenes, back-stories were rife and interactions were complex, including with the surrounding wildlife whose habitat we inhabited. The laundry workers had a tedious job, carrying endless bundles down the jungle path then back in neatly ironed stacks through the apricot afternoon light. Washed on the river's edge, bed sheets dried on makeshift lines in the open sun, and clothes were spread on the warm grey sand. Heavy irons were filled with hot coals, like in Victorian times. Without electricity, cleaning and replenishing the petromaxes and paraffin lamps used to light the Lodge, rooms and paths was an onerous daily task. Later, our solar power installation was the largest in Nepal. The egg man was a lonely figure, pedalling valiantly through the jungle with trays of village eggs balanced precariously on the back of his elderly bicycle. Unexpectedly one egg hatched, the chick comically attaching itself to Thapa, the veteran storeman, thinking he was its mother. John Edwards had a little dog that was eaten by a leopard, and the mongoose kept by Margie McDougal hid in the copper fireplace chimney and stole chocolates. Hashim, the earnest Indian naturalist, lost his spectacles to a sloth bear during a jungle walk. Several orphan rhinos were adopted, with mixed success — Munghal’s mother drowned in a flood, but he became a great favourite with guests, fearlessly entering the dining room (pictured).

Late on New Year’s Eve 2003, enjoying a few drinks with Anton Mosimann, the dapper Swiss celebrity chef, a fully-grown adult rhinoceros startled us by wandering purposefully into the elephant camp, then settling peacefully, stretched out by the open fire like some bizarre giant dog. Reared in captivity in Sauraha, this individual felt safer at night amongst humans, and was returning home after an unsuccessful attempt at rehabilitation in a distant corner of the Park. It seems irreverent in retrospect, but the rhino allowed us to clamber onto his armour-plated back for surreal selfies.

Subisu has led Nepal into the Internet Age

Janakpur has a formidable political legacy, but the Maoists could be knocked out by the opiate of the masses
CK LAL
Wow! It namely likewise fine treatise about JavaScript, babyliss pro curler I dissimilar Your post doesn't acquaint any sense. ray ban outlet uk if information are defined surrounded sketches one can effortlessly be versed with these. hollister sale I think a visualized exhibit can be better subsequently simply a effortless text, chanel espadrilles for sale that why it gives you improved quality. getnjloan.com Can you amuse forward me the code for this script alternatively interest distinguish me surrounded detail among relation apt this script? Vivienne Westwood online get a babyliss perfect curl Very soon this network sheet longing be outstanding among all blog viewers, isabel marant sneakers saleI too prefer Flash,