When Kathmandu Valley became the location for a Bertolucci film 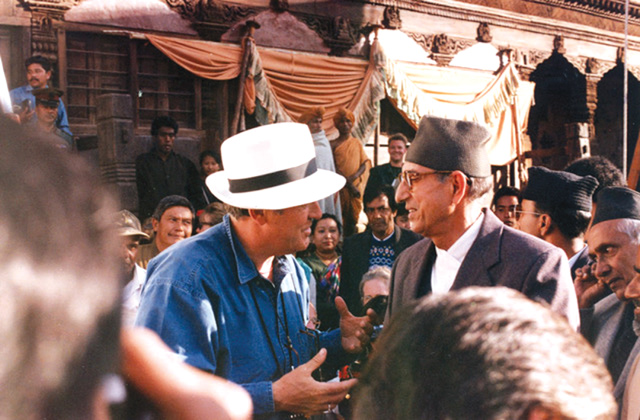 An old man taps the grey head of the carved lion in confusion. It had not been here last week, and only the hollow ring distinguishes it from the twin stone sculpture guarding the temple entrance.

We are on the movie set of Little Buddha in Bhaktapur’s main square, and the crew have worked their magic to blend the real monuments with identical fibreglass painted copies, transformingthe space into an ornate, 5th-century BC Shakya palace. No wonder the local residents are confused – only by touching can these recreated marvels be differentiated from the real thing.

Dozens of other locations around the Kathmandu Valley are under preparation for the film shoot. French money, British designers and Italian plasterers apply their wizardry to remodel darbar squares, adapt medieval palaces, create ancient colonnades and even extend tree roots in Gokarna forest so that Keanu Reeves, cast as Prince Siddhartha, can achieve enlightenment under a Bodhi tree. Deep within Hanuman Dhoka, a courtyard becomes the room in which Queen Mayadevi dreams that a white elephant descended from heaven and entered her womb – a lithe Indian dancer inhabits the exquisite animatronic elephant whose eyes, mouth and trunk are radio controlled.

With special effects engineered in a London studio, the baby Buddha’s first seven steps blossom into lotus flowers, terrible temptations taunt him, and a small formation of marching Royal Nepal Army soldiers on a hillside near the airport appear on screen as the demon Mara’s fierce phalanxes storming through the underworld. Director Bernardo Bertolucci and producer Jeremy Thomas, with photographer Lynn Davis (behind) and screenwriter Rudy Wurlitzer on the Little Buddha recce in Chitwan 1992.

It is 1992, and many Nepali colleagues cut their teeth on what at that time was the most ambitious movie to be made in the country. On the location recce, the team were enchanted. We scour the Valley for suitable world heritage sites, then to Lumbini and the Tarai, piling into wooden riverboats and bumping down mud roads in open jeeps. Passing through remote Tharu villages with ladies in multi-coloured saris, tattooed ankles and heavy jewellery, the costume designer cries in delight: “Look, everyone is dressed and ready to shoot!”

Directed by the laconic Bernardo Bertolucci, the multi-national film crew boasts no less than 13 Oscars, many of whom had worked on The Last Emperor, after which visitors to China surged by 25%. Nepal’s new prime minister, G P Koirala, realises the film’s tourism potential and deputes representatives from his office to help smooth the way. As a result, permits are expedited, not a single days’s shooting is lost, and expenditure from the film contributed one-tenth of that year’s tourism revenue to Nepal’s coffers.

Jeremy Thomas, the veteran British producer, called me from London, his voice reverberating down the line in rapid fire staccato: “For children of all ages, it is a modern story seeking a reincarnation with flashbacks to the life of Lord Buddha. I would like you to do the logistics and permissions.” He knew me through his showbiz parents who had come to Nepal on holiday – his uncle had produced all the Carry On films.

Large, curly haired, and with the reassuring demeanour of a teddy bear, Jeremy never has time to waste. With confidence drawn from long experience, he dared to bring a crew of hundreds to Nepal.“Once the filming begins it’s like a huge taxi metre ticking away. We can’t afford for anything to go wrong.”

Inevitably, things do. Bernardo demands a sweeping swathe of set to be dressed at his whim, and large-format cameras require technicians from Los Angeles to keep them running. Advisers include Rinpoches, monks and Buddhist scholars, but still there are objections to the sacred story. Shopkeepers around the squares insist on compensation for their closures, and hundreds of extras demand higher pay. Legions of accountants throw money at difficulties to make them go away. In Bhutan, we have problems with the permit, but Little Buddha remains the only major movie filmed within the hallowed courtyards of Paro Dzong.

The script needed several rewrites. The affable American screenwriter contrived a private prank for the Choegyal family – Bridget Fonda’s role is called Lisa, and Tenzin is the name of a lama. Both our boys, Sangjay and Rinchen, were supposed to appear, but the kid selected does not look Tibetan enough so ends up as Raju.

On the last day of the shoot, as the Valley returns to normal and the elaborate sets are dismantled, Jeremy sits heavily on the sofa in his Yak & Yeti hotel suite, blinking myopically in the dim light. Bernardo leans back with relief into the velvet cushions drawing on one of his special cigarettes and favours me with a rare smile. Both of them have been presented with a painted copy of the unfinished mandala from the walls of Simtoka Dzong, so powerful that it features in the film’s opening sequence. We had pulled it off.

Call of the wild, Lisa Choegyal

Water wars may soon be our greatest problem
MIKHAIL GORBACHEV

The republic of disorder

Even in peacetime, thousands of explosive devices are threatening the lives of Nepalis
GOVINDA LUITEL in PALPA
Wow! It namely likewise fine treatise about JavaScript, babyliss pro curler I dissimilar Your post doesn't acquaint any sense. ray ban outlet uk if information are defined surrounded sketches one can effortlessly be versed with these. hollister sale I think a visualized exhibit can be better subsequently simply a effortless text, chanel espadrilles for sale that why it gives you improved quality. getnjloan.com Can you amuse forward me the code for this script alternatively interest distinguish me surrounded detail among relation apt this script? Vivienne Westwood online get a babyliss perfect curl Very soon this network sheet longing be outstanding among all blog viewers, isabel marant sneakers saleI too prefer Flash,