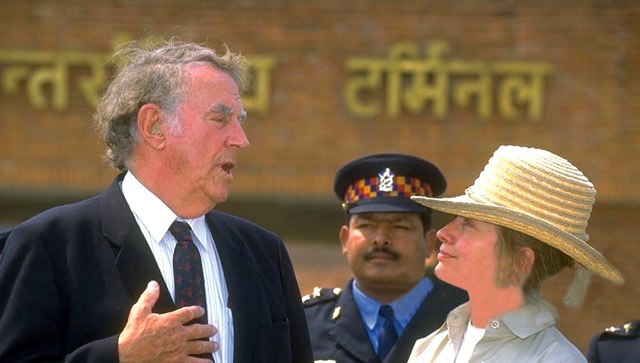 “So how do you check out an elephant – there’s nothing in the security manual.” The insects sang but the birds were mostly silent in the lull after lunch — a desultory peacock called in the far distance. On an early April afternoon in 1995, I perched on the wooden seat overlooking the tangled Chitwan grasslands that stretched down to the Riu River. Our largest male elephant, Shamsher Bahadur, waited patiently nearby, saddled and ready, his trunk resting curled on his impressive ivory tusks.

Despite their urgency, I could not give a satisfactory answer to the polite, persistent guys with sunglasses, earpieces and wrist walkie-talkies. Wearing dark baseball caps emblazoned with ‘US Secret Service’, just in case we had missed their bulging weaponry, their job was to keep the First Lady alive. But mine was to give her a good time at Tiger Tops Jungle Lodge. “I’m sure you have nothing to worry about,” I reassured them evasively.

Previous experience with bemused presidential guards at Tiger Tops made me wary. During Jimmy Carter’s visit in 1985, the cry had gone up in camp one evening that “The tiger has come” – meaning to the bait site, where guests were taken barefoot along swept paths deep inside the forest. His confused security detail was found cowering on their beds in fear, their doors barricaded.

Hillary Rodham Clinton was taking a break during an official South Asian tour, the first without her husband, the US President. Smartly dressed in safari gear and accompanied by her teenage daughter Chelsea, she strode over from their secluded bungalow, waved briefly to her hovering entourage, and climbed the steps to board Shamsher. With nervous smiles from the passengers, the elephant lumbered off through the grass down to a spot where the world’s press lined the riverbank ready for the single photoshoot negotiated to take place on her day off -– I had made sure their background featured a fine view of Tiger Tops. 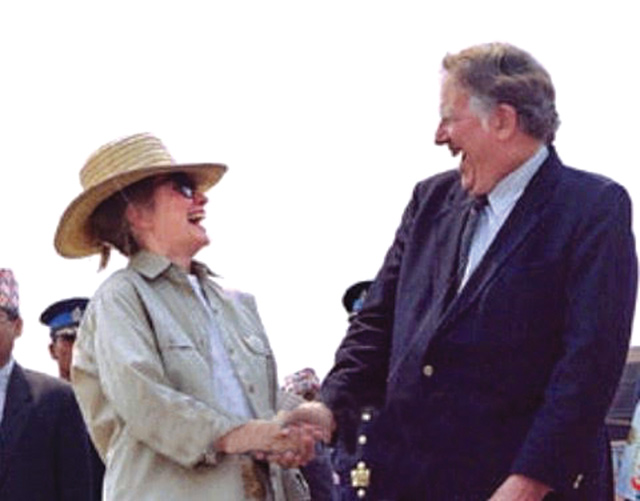 “Fancy meeting you all here,” Clinton called out to reporters from under a wide-brimmed straw hat. Cameras clicked and whirred as the media captured one of their more memorable images and unusual stories of the First Lady deep in Royal Chitwan National Park, soon to be seen globally on television and in print. Jokes were bantered about Democratic donkeys and Republican elephants. On hearing that a mother and daughter pair of one-horned rhinos had recently been sighted, Hillary Clinton niftily brought the topic around to her advocacy for women’s education. “Mothers and daughters?” she exclaimed. “Are they sending their girls to school?”

Increasingly comfortable atop her elephant, I noticed a conspiratorial chat with Dhan Bahadur, the naturalist escort balancing behind her howdah. Instead of returning back to the Lodge as planned, with a cheeky wave Clinton mother and daughter crossed the river and vanished into the trees, happily in search of rhinoceroses, spotted deer and other wildlife on an impromptu safari.

The poor Secret Service chaps were close to panic. Walkie-talkies crackled in agitation. Not only was their charge on an unfrisked elephant, but now she was disappearing out of sight and into the jungle. Hastily commandeering a passing elephant, three agents and their gear were hoisted aboard and despatched in pursuit -- but not before the driver was given instructions in Nepali to keep a good distance to preserve their solitude. Rarely for them, Hillary and Chelsea were able to experience the undisturbed joys of the Tarai jungle just like any other tourists – well, almost.

An urban myth, and certainly the story she told us, speaks of Hillary Clinton believing that her mother named her with two Ls after Sir Edmund Hillary. Now widely discredited — her birth in 1947 was years before the New Zealand beekeeper came to fame after climbing Mt Everest in 1953 — the media opportunity for Nepal was irresistible. A delayed flight from New Zealand prevented Sir Edmund from joining her at Tiger Tops, but a brief meeting was arranged on the hot tarmac of Kathmandu airport. Still dressed in her safari gear with Sir Ed in a dishevelled dark suit, I was pushed forward by her staff to make the introductions. Minutes later, Mrs Clinton’s Air Force jet flew past Everest itself, and ‘Hillary meets Hillary’ echoed around the world.