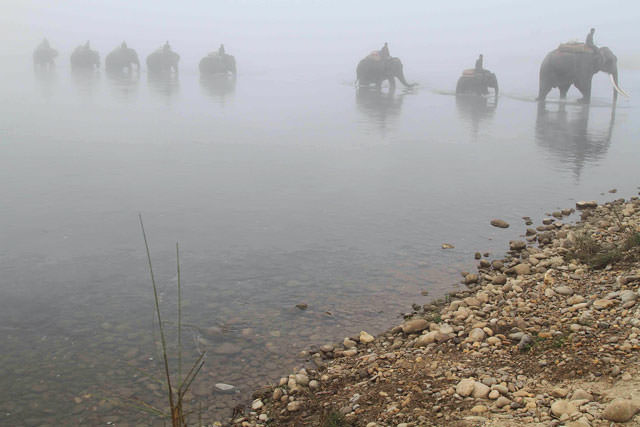 Recently I visited what is left of Tiger Tops Jungle Lodge. Although yellow shafts of sunlight dappled the trees deep within the national park, and the sandy road was thick with tiger and rhino tracks, the mood was dark as I stood in the empty clearing, crowds of memories and shades of people jostling around me.

The thick green forest is patterned with tangled creepers clasping tree trunks, crocodile bark and familiar wild animal scents. On our drive we pause as a rhino wades through a backwater, a startling pink-bottomed macaque faces off a rival, a cheetal barks in alarm, and a marsh mugger slides into the tal, hanging like a dream just beneath the cloudy green surface. 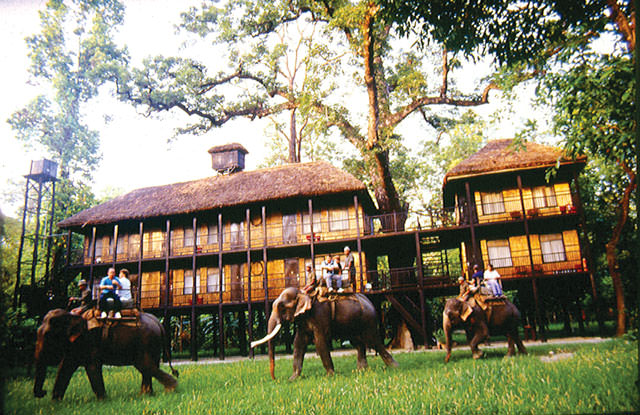 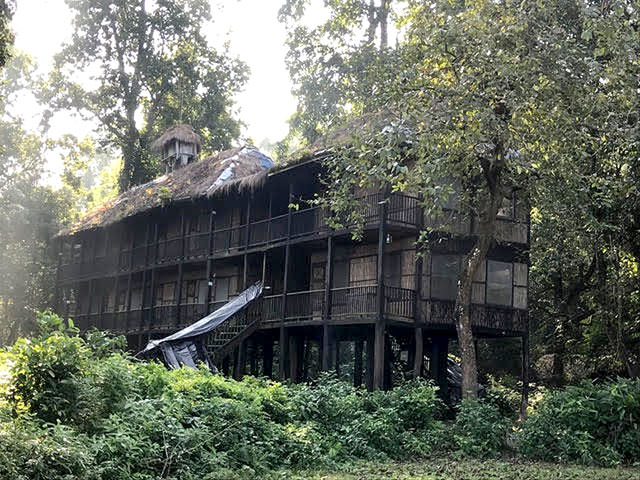 The heavy monsoon floods have cleared the forest floor and forged new watercourses — I hardly recognised Dhakri Khola — but many moons ago a big male leopard and I had startled each other as I drove by the gully. Wasn’t this the pond where our small sons, terrified, had hooked a crocodile whilst on an innocent illicit fishing expedition? And down this steep bank a tigress defending her cubs had roared at my brother Nick, giving him and his guide the fright of their lives.

I have not worked in Tiger Tops since 1997, but visited often until 2012, when all the lodges inside the protected area were closed by the government. The organic nature of change is reclaiming the lodge: its roof thatch ragged, bamboo walls peeling, and black tarpaulins failing to fight off the damp and disintegration. Moss has grown on the empty steps where we had so often stood in our jungle green, greeting elephant safaris, friends and guests. The silent dining room, with ivory tusks still framing the dusty bar, once rang with chatter, laughter and stories of the day’s wildlife encounters. Neglected landrovers, which once took us on thrilling game drives, delivered us to the grass airfield and shuttled players to the elephant polo ground, huddle in their ramshackle sheds. 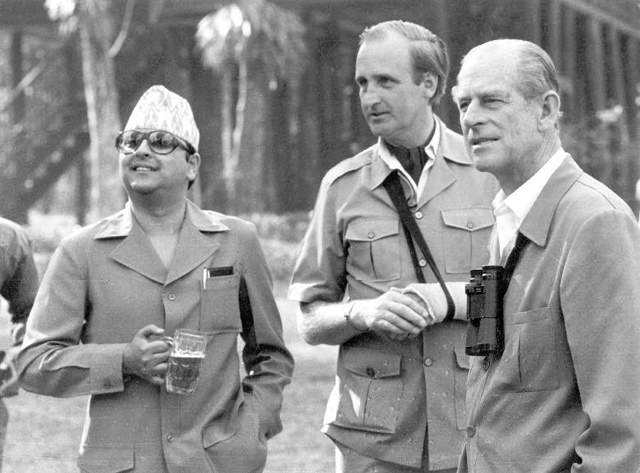 Entire lives were lived in this crumbling compound — closing my eyes I fleetingly capture the arrival of my 40-years-ago self, spellbound, enthusiastically embracing life at the Lodge, with all its tangled relationships, company chaos and behind-the-scenes scrambles. These paths now choked with weeds were once trod by the likes of Hillary Clinton, Robert Redford, Mick Jagger and many more. Prince Philip strode past the British press corps, gathered respectfully on the now-naked stone balcony. “Good morning Sir”, they called cheerfully. The Prince glowered: “It was,” he barked, “until I saw you lot!” before joining Prince Gyanendra and Jim Edwards waiting politely on the lawn. 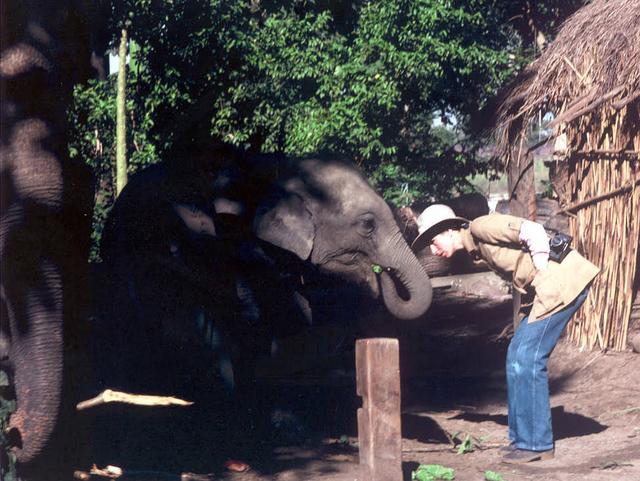 Princess Anne at the Tiger Tops elephant camp in 1981.

Princess Anne famously fired her private secretary whilst on a Chitwan elephant safari. Henry Kissinger stood on these decaying wooden stairs, paralysed by vertigo and unable to step down into the howdah — instead I took him on a jungle drive. Zig Breszinsky helped dart an injured tiger that had turned man eater, and Jimmy Carter posed with tiny Timothy Edwards in his arms. We stage-managed Robert Redford’s activities to avoid crossing jungle paths with Goldie Hawn and her husband Kurt Russell, back early from an Annapurna trek. This peaceful sandbar was swept clean of wild animal tracks for the glitzy marriage of Pamela Bellwood with Nik Wheeler, Jim’s photo-journalist friend: “I have been Best Man at every one of his weddings.” 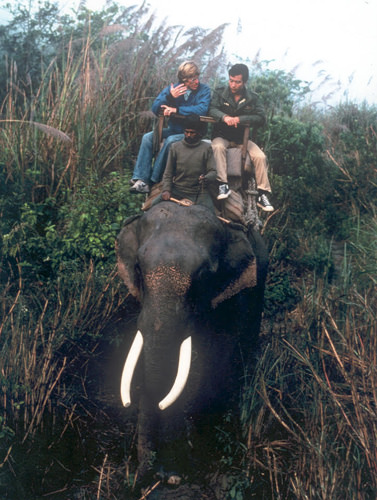 Robert Redford at Tiger Tops in 1981 with manager KK Gurung.

On this patch of ground, I stood 30 years ago by the elephant-loading platform with first-born Sangjay on my hip, his little head cosy in a blue woollen cap, when he spoke his very first word — not mama or papa but hatti (elephant), pointing a tiny finger at the huge grey bulk, prophesying his life and career associated with pachyderms. Another moment in Surung when we unintentionally cornered a tiger — with a heart-stopping roar it charged my elephant with baby Rinchen sleeping tightly clasped on my knee, swerving at what seemed like the very last moment into the undergrowth. Rinchen didn’t even wake. And here in the dilapidated elephant camp lines where my toddler sons so loved to hang out, Rinchen hands on hips indignantly admonished me: “They may be staff to you, Mum, but they are MY FRIENDS!” 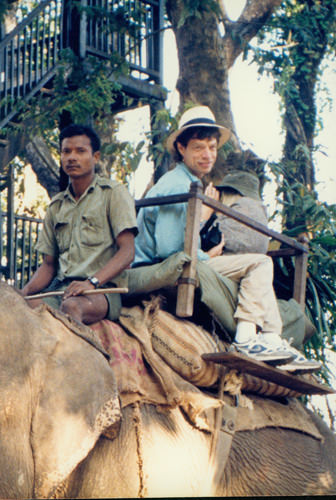 Tiger Tops has come and gone as the best wildlife lodge in Asia. Tourists now walk with elephants rather than ride them, jungle jeeps are specially sprung and tiered, and some fine hotels and lodges are operating on the Park perimeters. The loss of the lease concessions in the Tarai national parks was the end of Nepal’s reign as Asia’s best wildlife destination.

But still the Narayani River flows liquid silver as the red sun sinks behind the hazy horizon, and the ancient rhythm of jungle life endures. A rhino rustles in the long grass, heading for an evening drink and at my feet deep tiger pug marks are engraved into the riverside mud, timelessly imprinted by generations of Chitwan’s big cats.

One day of life in the jungle, Lisa Choegyal

On 1 September, both the riots and the lack of security response were deliberate

Is there a conflict of interest in the peace efforts?