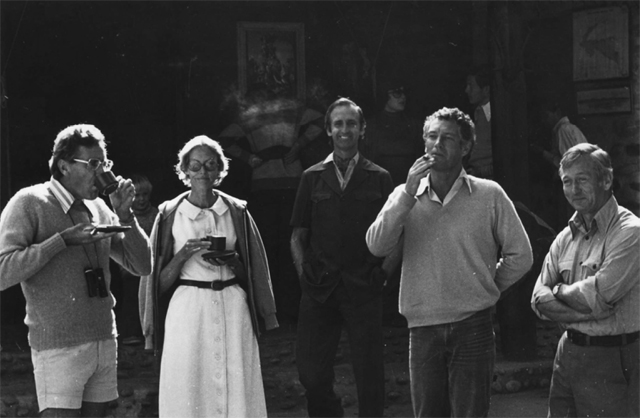 Have you ever seen anyone bite into a whole hardboiled egg – but with the shell still on? Or feed tidbits between his lips to a tame giraffe so a large tongue envelops his face? Or sport a wound in his calf large enough to pass through a Coca Cola bottle as the result of a hippo bite, or lose a finger, and luckily not a whole lot more, after an encounter with a puff adder? My personal favourite was the pet anteater named Million – because Aardvark a Million Miles for One of Your Smiles, of course.

But then the world is unlikely to see again the quirky brilliance of the great Alan Root, peerless wildlife filmmaker extraordinaire, who died last month at his home in Kenya aged 80. 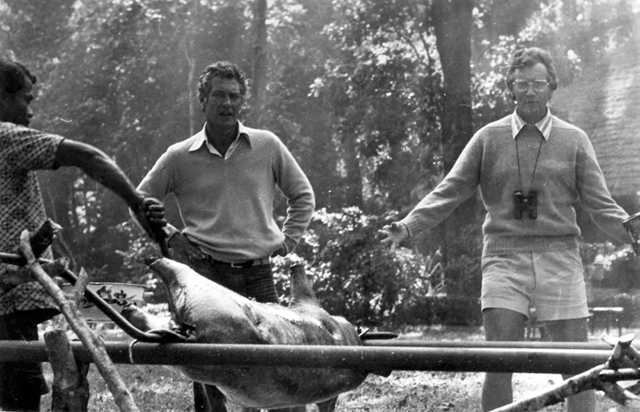 Alan Root (with binoculars) in Chitwan in 1977, with Nicholas AJ Spencer, watching a pig being roasted.

A talented mimic summoning species with perfect imitations (baboon alarms and tree hyrax calls were my favourite), Alan stopped at nothing in pursuit of his art, disguising himself in floats and hides, pioneering remote cameras, using hot air balloons as a camera platform, and flying (and crashing) helicopters specially modified for his puff adder-ed hand.

He won over 60 honours for his work including an Oscar (for Serengeti Shall Not Die), an OBE and several lifetime achievement awards. Long-term collaborator Mark Keeble wrote: ‘(His documentaries) conveyed a knowledge of natural history and wildlife behaviour that few could equal … To spend time with Alan’s films is to enter a world where the wild animals are the stars, and the story is the way to engage with them ... Alan and Joan’s films had a global audience of hundreds of millions.’ 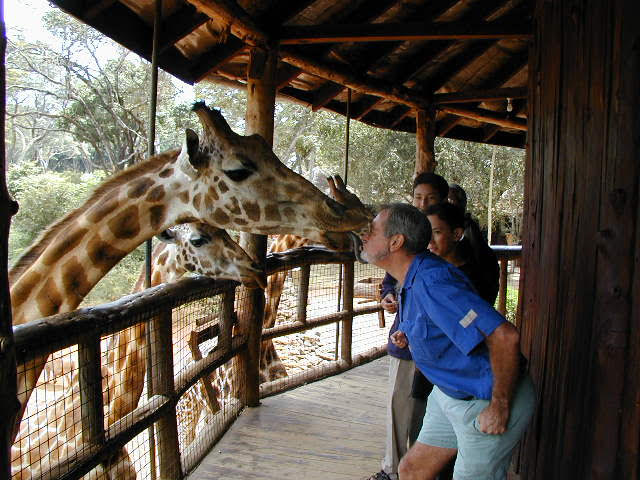 Tiger Tops used to attract many natural history filmmakers, including Survival Anglia television teams who based themselves with us for years at a time. Inspired and mentored by Alan Root, many had worked with him in Africa and the great man was invited for Christmas in Chitwan. His visit followed in the footsteps of such giants as Bernhard Grzimek of Frankfurt Zoo and David Attenborough of the BBC.

Alan connected with the wildlife of Nepal, and we connected with him. He returned on several trips, the last with his (third) wife Fran and their two small blond boys Myles and Rory in 2007, and we visited them in East Africa. Alan met us on arrival at Nairobi airport, wearing a blue, short-sleeved shirt with pilot’s epaulettes, for the few minutes’ flight in his tiny aircraft across the national park to their stone house overlooking a ravine. Flying within inches of the ground was a speciality, and my sons were mesmerised, remembering with glee buzzing the springbok from the grass airstrip for our landing.

Alan’s maverick enthusiasm for life often translated into a cavalier attitude to authority, exemplified by the arrangements for his marriage to Fran under a spreading fig tree on a secluded plateau in the midst of wildest Tanzania. Guests arrived ‘under the radar’ across the border and we were shuttled up from the secret camp for the wedding from a bush airstrip. My young boys hung from the spreading branches directly above the joyous al fresco ceremony, and the African savannah stretched and shimmered below us.

Amidst all the accolades, tributes and stories of Alan Root being remembered this month, there is one special Nepal memory that has escaped wider notice. ‘Root’s Ruin’ was a hot drink originally concocted by Alan in the Lodge bar late one chilly Chitwan evening – I recall that the flights had been cancelled. After trial, error and multiple tastings, the final recipe included Khukri rum, lemon, honey, cinnamon, nutmeg and hot water. The cocktail has become a firm favourite under it’s more politically correct name, Tiger Tops Special, but a few select Nepali barmen still smilingly know what to serve if asked for a Root’s Ruin.